Oregon St. opened a healthy lead early, and pulled ahead by 21 points at halftime, going up 36-15. It was a season low in a half for Utah, as the Beaver defense limited the Utes to 22% shooting from the field, both inside and beyond the 3 point arc. The Utes didn't score from the floor for almost half of the first half.

The Beavers led by as many as 31 points twice early in the second half, the first time 5 minutes after the break, after a 15-5 run put them ahead 51-20. After falling behind 56-25 about 7 minutes into the second half Utah rallied, a product of shooting 69%, 18 of 26, from the field after the break, but never got closer than the 10 points that was the final difference.

Utah never got within 20 points again until there was only 3:18 left.

The Utes were both out-matched and over-matched until the Beavers began to go to their bench to a greater degree, and also focus more on the clock than the score, confident they had snapped their recent 5 game losing streak.

The win clinched a winning regular season for Oregon St., only their second in the last 22 years, and ensured a non-losing season, the second in the 4 years under Craig Robinson, and only their third time in 22 years they won't finish below .500.

Jared Cunningham posted a game high 17 points, all but 2 of which came in the second half, and Ahmad Starks had another good shooting night, finishing above 50% from the field and on 3 pointers, and with 13 points.

Cunningham also had a pair of steals and 6 assists.

"Jared showed a little of the old Jared tonight," Robinson said. "He's a very selfless player, sometimes too much so, but tonight he let the game come to him." 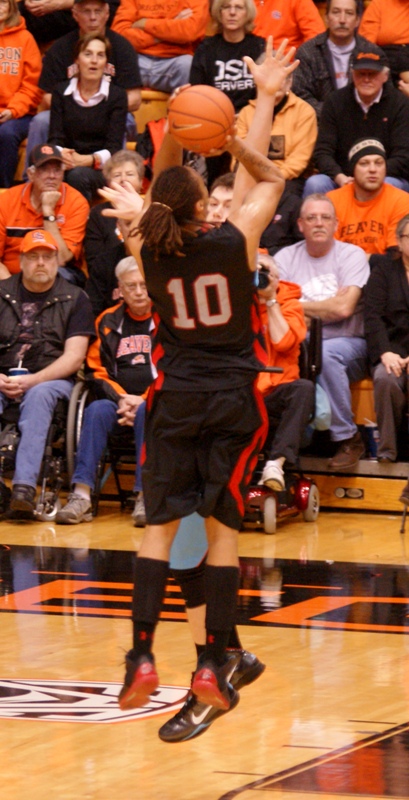 Dijon Farr, above, had 16 points to lead Utah, and added a team high 9 rebounds, while Jason Washburn added 14, and Chris Hines chipped in a dozen. 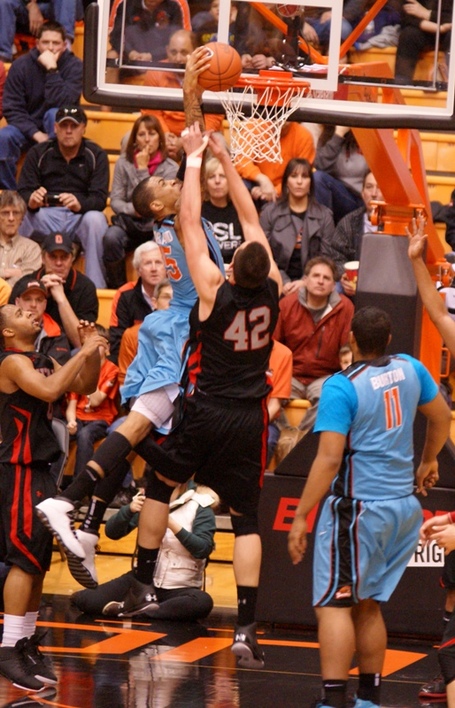 Eric Moreland, scoring above against Utah's Jason Washburn, had a strong game, with 9 points, the game high of 13 rebounds, and multiple blocked shots. Moreland also had one of the signature plays of the game that helped blow thing open in the second half, with a blocked shot, and then a slam dunk when Cunningham left a pass at the rim for him. 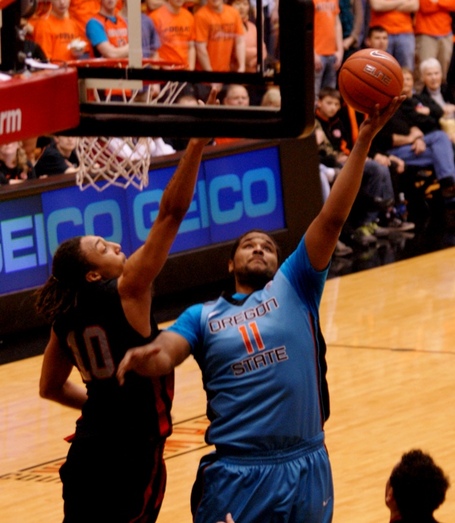 Joe Burton, above, broke out of a recent slump, with 13 points, 7 rebounds, 4 assists, and 2 steals.

"Nobody feels better for Joe than I do," Robinson said. "He does a lot of different things for us, and when he struggled, you see we did as a team."

One of Burton's assists led to Cunningham's addition to the season long highlight video, this time a 180 degree reverse dunk. 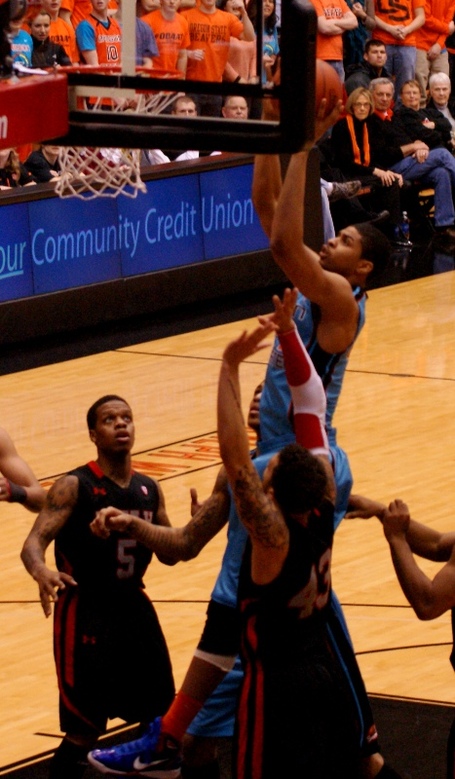 Devon Collier, bouncing back from a dislocated knee cap suffered in the first half of the Oregon game, added 10 points, mostly in the first half, including the basket above, and 6 of the Beavers first 15 points, helping to get Oregon St. going.

"I wanted to do 2 games with them this year, 1 non-conference, like before, and 1 conference game," Robinson explained, "and we thought this was the perfect game, what with the history the Utah program has, and having the native American connection in their nickname, and how many native Americans come from that area."

Despite the game not being televised, the 6th (!) conference game that was invisible, a small crowd of 3,643, barely more than a third the size of the capacity crowd on hand for the CIvil War last Sunday, turned out. A major fund raising event conducted by the university's Greek community across the street divided the student body, but the "adult" audience was way down, despite former great A.C. Green, below, being on hand to be honored as one of the Pac-8/10/(now 12)'s all-time greats to be acknowledged next week at the conference tournament. 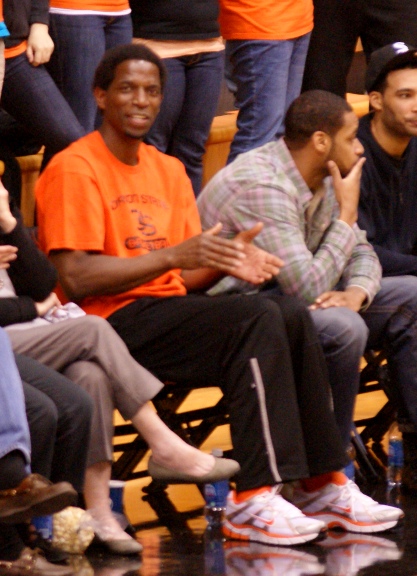 Oregon St. (16-13, 6-11) is tied for 8th in the Pac-12 standings with Washington St. (14-15, 6-11) after the Cougs were clobbered 78-46 by UCLA tonight. However Washington St. holds the tie-breaker over the Beavers, having swept the season series. The Beavers wrap up the regular season Saturday at 1 PM, with Senior Day on a game to be nationally televised by the Fox Sports Network and ROOT Sports affiliates, against Colorado (19-10, 11-6). The Buffs fell 90-81 in a shootout in Eugene tonight to Oregon, and dropped to 5th in the conference,