The Oregon St. women's basketball team has now won 4 games in a row, after sweeping the weekend series with Colorado and Utah. The Beavers went wire to wire in both wins, defeating Colorado 65-45 Thursday night, and backed it up by beating Utah 62-49 Saturday afternoon. It's the first time in 11 years Oregon St. has won 4 consecutive conference games.

Earlysia Marchbanks had a huge hand in the wins, posting a game high 13 points to lead a balanced Oregon St. effort against Colorado, and then had her career best effort, posting a career high 22 points as part of a game leading double double, where her 10 rebounds led the Beavers, and co-led the game.

"Before the (Utah) game, Coach Rueck came up to me and said ‘let the game come to you,'" Marchbanks said. "The first basket went in, and then I was able to get some steals. The baskets just came easy after that. All week long coach said that if I get the rebound I can go, and that's what I did. Easy buckets came, and I got my teammates involved."

The Beavers got off to solid defensive starts in both games, holding Colorado in single digits scoring for 14 1/2 minutes, which staked them to a double digit lead that would never shrink back to single digits, and limiting Utah to 11 points for almost 13 minutes.

The Buffs never recovered, trailing by as many as 27 points before Beavers' coach Scott Rueck began to experiment in the final 5 minutes. Which is the time to try things, up by more than 20 points with only a few minutes left.

The Utes were more persistent, rallying within 4 points by halftime, and again early in the second half. The Beavers responded with a 13-1 run, only to see Utah scratch back to within 5 points, down only 50-45 with nearly 4 minutes still to go. Oregon St. slammed the door on Utah with a 12-4 run to the finish. 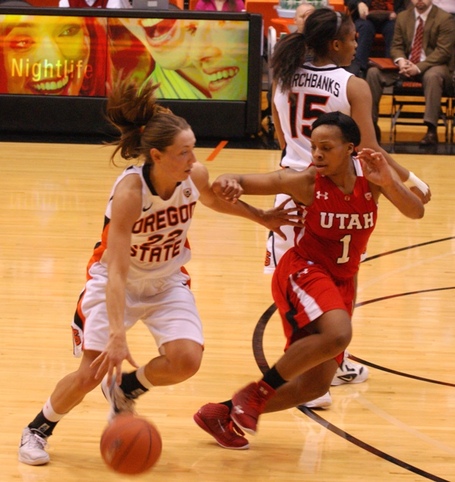 Oregon St. shot 45% for the game while holding Colorado under 29%, and allowed only one player, Julie Seabrook to score in double digits, and she only posted 10 points.

Utah got 17 from Michelle Plouffe, and 16 from Taryn Wicijowski, but Oregon St. held the Utes to 31% shooting, while hitting 52% of their shots, and 60% on 3 pointers.

The sweep was by no means anything anyone should have taken for granted, as Colorado carried a 15-5 record into the valley, and Utah was a .500 team. The double sweep on the "Oregon Trail" has happened to traveling partners in various sports before though, and now the mountain area additions have been officially welcomed to the Pac-12. 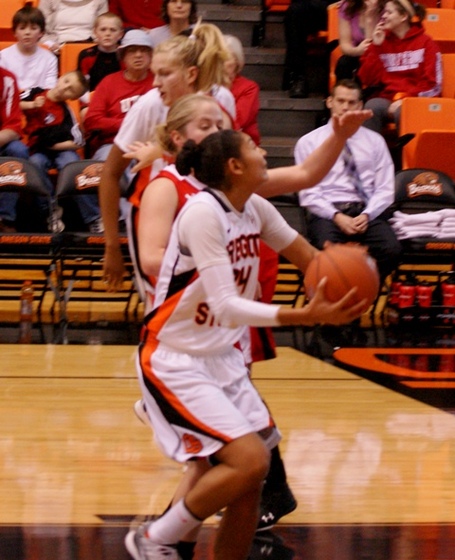 Alyssa Martin had 15 rebounds, 13 points, and 7 assists for the Beavers in the

2 games against Colorado and Utah.

Oregon St. (15-7, 6-5) will have a tough go of it the rest of the way, with 5 of their remaining 7 games before the Pac-12 tournament on the road, and the 2 best teams in the Conference, Stanford and California, the opponents in the only remaining home stand.

Realistically, getting to 20 wins will probably take at least one win in the tournament, and unless the Beavers can upset either the Cardinal or the Golden Bears, an NCAA Tournament berth may be a tall order, though not impossible. An NIT bid is a very realistic possibility, because while the schedule is challenging to say the least, it's certainly not impossible.

Though Stanford is the #4 team in the nation, Oregon St. had the lead midway in the second half on the Cardinal's floor, and only lost by 7 points. Of the 5 teams the Beavers will face on the road, all are below them in the standings, and Oregon St. has already beaten 4 of them, and it took double overtime for Washington St. to pull out the win.

The progress made by the women's team has been below the radar of many, as reflected by the small turnouts of only 1,159 for Colorado, and 1,429 for Utah. And this with Oregon products on both rosters. The low attendance was a bit of a surprise, given the largest attendance of the Rueck era was on hand a week previously for the Oregon game. And there weren't that many Quacker Backers in that crowd.

The usually solid "Beaver Dam" student section can be given a pass for being a little light this week, afterall, it is mid-term time.

And Buildingthedam hasn't been as helpful as we would like either, due to time constraints. But a quick refresher reveals just how far Rueck and company have come in a very short amount of time.

Most Beaver fans recall that just 2 years ago, the collapse of the LaVonda Wagner era left Oregon St. with almost no program, after a nearly complete exodus of players. Rueck was essentially starting up an expansion program in the powerful Pac-10. Taking one of the local community college programs up to Division I would have been easier, and even those looking through orange colored glasses thought it would be unlikely if Rueck could win a game, never mind a conference game, in that first year.

But those close losses also meant Rueck and his team didn't get the job done 14 times when they could, and at least some of the time, should have. It was a good start, but more needed to be done, and Rueck knew it. Too many of those close losses were the result of needing a player with tired arms and worn out legs to make a play they would have executed easily earlier in the game, but couldn't come up with after too many minutes. 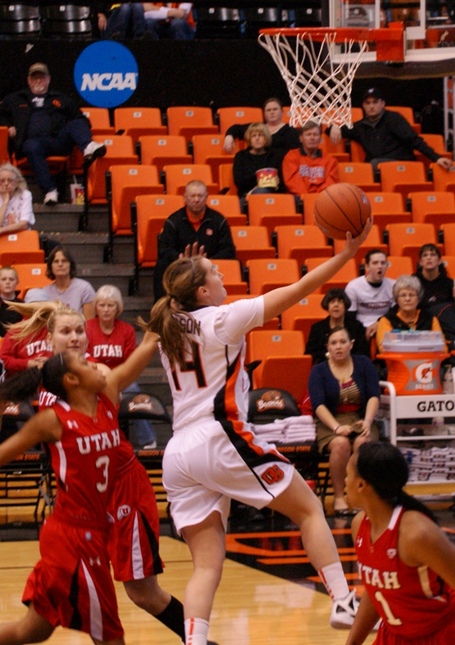 A second recruiting class has brought more quality as well as depth, and a bigger and better front court. And as a result, a team that can and does go 8 or 9 deep, and some wins that has taught the team how to win, something Rueck admitted would be the biggest hurdle they would have to get over.

"Four wins in a row in conference is a great thing," Rueck said. "It is nice to have all our efforts rewarded on the scoreboard. Sometimes in the past it hasn't happened that way. But I think it demonstrates the growth of our program and team. I think we are putting 40 minute games together now, and I think we have the talent this year to be able to compete like that. I'm really happy for this group, and what they are accomplishing, and their growth in every way."

It's off to the state of Washington this coming week, for games in Pullman Thursday, and Seattle Saturday. And the Beavers, currently tied for 5th. in the conference, will be facing another new situation in the Rueck era, that of being favored to win both ends of a Pac-12 series, never mind one on the road. 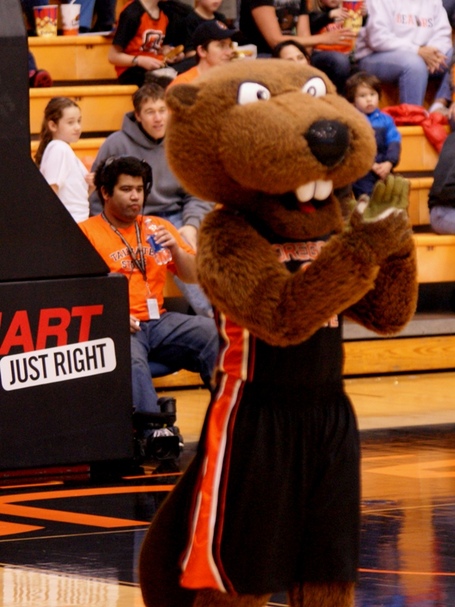 With both basketball teams standing with 15 wins, and almost assured of winning seasons, something that seemed unthinkable a very short time ago, Benny is looking forward to making a run at the post season!