Share All sharing options for: Beavers Bounce Back, Blast Utes

In case you missed it, and given the absence of tv coverage, chances are you did, Oregon St. bounced back from a bad outing Thursday at Colorado to take a wire to wire 76-58 win over Utah Saturday afternoon at the Huntsman Center in Sale Lake City.

It took 2/3s of the first half for the Beavers to open their first double digit lead, a 25-15 advantage off a Devon Collier dunk, and they had to withstand a bit of an uprising after halftime, when the persistent Utes cut the deficit to single digits on 4 different occasions. But back to back baskets by Jared Cunningham put Oregon St. ahead 50-37 with just over 13 minutes left, and Utah never threatened again.

Cunningham led all scorers, with 20 points, but the story was that Oregon St. won with their front-court, not their guard play. Collier had 14 points, and Joe Burton and Angus Brandt combined for another 14, and Kevin McShane chipped in 7 points, his career best. The front court production was a particularly good thing for the Beavers, given that Ahmad Starks struggled somewhat again at altitude, and Roberto Nelson wasn't particularly productive either.

Starks scored 6 points, better than in Boulder, and Nelson 5, but neither figured nearly as prominently in the outcome as is usually the case for Oregon St.

Even more notable was the outcome in light of the lack of outside shooting. Oregon St. missed every one of their 8 first half shots from 3 point range, and unlike so many games this season, only took one more shot from long range, which was also missed. The Beavers finished 0 for 9 on 3 pointers.

Instead, they pounded the ball inside, and the result was a 50-24 advantage in points in the paint. The Beavers also got to the free throw line 25 times, and made 18 of them, and grabbed 18 offensive rebounds, which was a large component in their 39-30 edge on the boards.

"I was really proud of the discipline the guys showed," Oregon St. coach Craig Robinson said. "Ordinarily, when we have struggled with our 3 point shots, they have felt like they needed to keep taking them to try to catch up. Today, they resisted that temptation, and went inside. It doesn't matter what's happening on the perimeter when you have that 50-24 edge in the paint."

Burton, below scoring 2 of his 8 points, played more than anyone but Cunningham, and had another all-around game, with a career high 6 steals to go along with 5 assists, and a game high 11 rebounds. 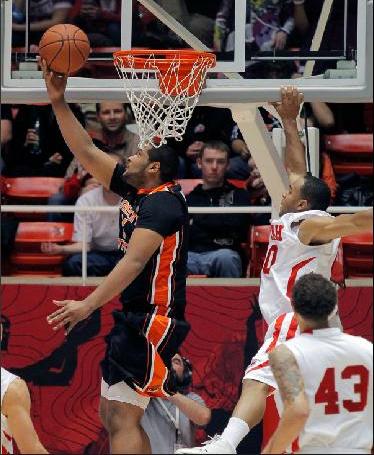 "As well as Jared played, Joe was the most valuable player for this game," Robinson felt. "He had a couple of miscues right at the beginning of the game, and I pulled him aside and told him to just settle down, but after that, it was like he was trying to make up for that for the rest of the game, and just carried us in all aspects of the game - rebounding, scoring, defense, assists."

Oregon St.'s curtailing their outside shooting resulted in their out-shooting Utah from the floor in both halves, but especially after the break, when the Beavers shot 56%, making 14 of 25 shots.

The Beavers also got to loose balls better than the Utes, including the one Eric Moreland got to below, and had a 16-7 edge in steals, a large part of their having a +9 advantage in turnovers. 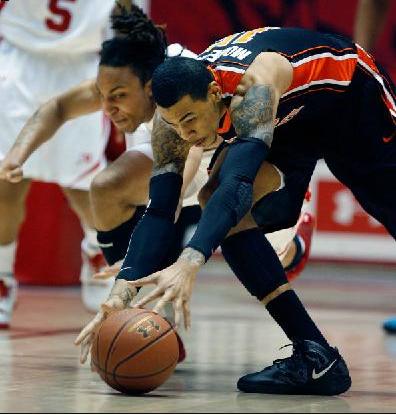 Oregon St. (15-8, 5-6) won 2 of 3 games in their recent road stretch, and has won 4 of their last 5, though it still leaves them in 8th place in the Pac-12. The Beavers return home for a weekend series against Washington St. next Thursday evening, and Washington on Sunday. Oregon St. finishes the regular season with 5 of their last 7 games at Gill Coliseum. Utah (5-18, 2-9) has now lost 4 in a row.

Despite Oregon St.'s disappointing loss at Colorado, their fortunate reality is that they could have played quite well and still lost to the Buffs, and getting 2 wins out of 3 games on the road in 7 days has to be considered a success. Playing anything above .500 ball the rest of the way will guarantee a 20 win season, and a postseason bid, though it will take more than that to make that post-season bid be in the NCAA tournament.