It might be just as well for Beaver Nation that there was no tv and there were Internet issues that kept the game thread unavailable much of the night, as there was little good from the Oregon St. point of view about the game.

Colorado pushed the pace all night, and they made shots. Oregon St. couldn't stop the Buffs, and the Beavers couldn't make a shot for long periods of time. After a little while, that became the recipe for a blowout.

It took almost 2 minutes for Oregon St. to score, but Colorado didn't open much of a lead. The Beavers took their first lead on a Jared Cunningham 3 pointer 2 and a half minutes into the game, and held the lead for the next 3 and a half minutes.

Even after the Buffs regained the lead, a result of a 3 minute Beaver scoring drought, Oregon St. stayed close for the next 10 minutes. But the next of what would be a series of scoring droughts allowed Colorado to begin to pull away.

Oregon St. went over 6 minutes with only a pair of baskets, by Joe Burton and Eric Moreland, and found themselves down 13 points. Another drought going into the half saw Colorado move ahead to a 46-31 advantage at the break.

Oregon St.'s scoring slumps continued in the second half, with droughts of 3 and a half minutes and 2 minutes, and another stretch of nearly 8 minutes with only 1 basket and 3 free throws. Colorado led by as many as 28 points, and by double digits from the 3:42 point in the first half on.

Oregon St. collectively shot atrociously, making only 50% of their free throws, 36% of their shots from the field (21 of 58), and only 20% on 3 pointers, connecting on only 4 of 20. The problem lied with the backcourt, as Burton, Devon Collier, Angus Brandt, and Eric Moreland shot a combined 13 of 20, but Cunningham, Ahmad Starks, and Roberto Nelson were a combined 7 of 29.

Cunningham co-led Oregon St. along with Collier, with 12 points each, and Nelson added 10, largely due to his hitting 7 of 11 free throws. But Starks made only 1 shot all night. 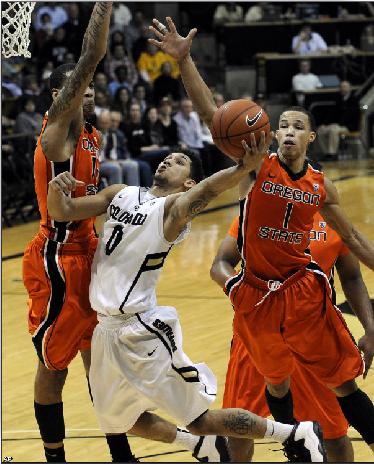 Roberson had a lot of help, however, as Askia Booker, above splitting the defense of Moreland and Cunningham, came off the Buff's bench to add 15 points. Austin Dufault made 6 of 7 shots, including the one below over Kevin McShane and Moreland, and finished with 14 points, while Carlon Brown contributed 12, and Spencer Dinwiddie 10. 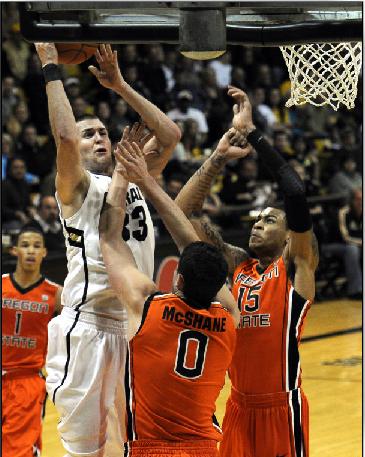 The Buffs had more assists, steals, and blocked shots than the Beavers, and had a 16 rebound advantage as well. It was by far the worst outing of the season for Oregon St. Offensively, Colorado beat the Beavers at their own game, and also demonstrated why they are the conference's best defensive team, especially in the open floor.

"We just weren't ready to play," Oregon St. coach Craig Robinson said. "The beginning of the game looked good. I don't know if it was the altitude or complacency, but a lot of it has to do with the fact that they (Colorado) played really well. We didn't get back on defense and that was a big part of it. There were so many points from the paint in transition that you just can't win that way.

Even when we are playing defense poorly, we don't give up numbers like this. I have to really look at tape and see what exactly went wrong. You have to learn how to manage a game when you're on the road. We are still learning on how to do that, and I'll take the blame for that. I still have to be better on teaching these guys how to manage a game on the road like this, especially against a team who's at or near the top of the league."