Arizona quarterback Matt Scott's career didn't always go as originally planned, and neither his senior season, nor his final game for the ‘Cats, did either, but the final minute of the New Mexico Bowl, the first of the 8 bowl games involving Pac-12 teams, had to provide a measure of redemption, not to mention a memory Scott, and Wildcat fans everywhere, will remember forever.

Scott misfired on 40% of his throws in Albuquerque, and had 2 of them picked off. But Arizona's senior, who red-shirted as a senior while Nick Foles finished his career in order to come back for a 5th season, completed all 8 official throws, and drew Pac-12esque pass interference calls the likes of which hadn't been seen from the ACC crew earlier in the game on his other 2 tosses, as he led Arizona from 13 points down, with 2 touchdown passes in the final minute of the game, and then got to kneel down to put the game away, after Marquis Flowers' interception (a rare defensive big play, especially for Arizona, in what was a wild shootout to start off the bowl season).

Despite the defensive tribulations that tend to plague Arizona coach Rich Rodriguez's teams, the game did validate the single greatest advantage that the ballistic pace that offenses like "RichRod" ball provide; the ability to score fast and often. Utah took what looked to be an insurmountable lead when Nevada's Allen Hardison hit his second field goal of the game with only 1:48 left. Coupled with a similar clock-efficient Wolf Pack drive that ended in a field goal right before halftime, it not only meant one score wouldn't be enough to bring Arizona back, it even took a field goal after recovering the on-side kick, which was also a Flowers accomplishment, out of the equation.

But it didn't take Scott out of the equation, and as a result, squandered a Nevada effort that saw the ‘Cats never lead until John Bonano's extra point with 19 seconds left.

Nevada opened a 21-0 first quarter lead, as Cody Fajardo found Zach Sudfeld, who spent all of Friday being ill in hos hotel room, for 2 touchdown passes in 14 seconds, aided by Dan Jenkins' fumble of the kickoff return after the first one.

After a fist fight between ‘Cat offensive and defensive players on the sideline, Arizona got started back on the first of 3 touchdowns by Ka'Deem Carey, and tied the game at both 21 and 28 apiece on Carey's other 2 scores, but Hardison's field goal and the pair of third quarter touchdowns Fajardo accounted for, one throwing and one rushing, after being briefly knocked out of the game, put the ‘Cats down 3 scores. Which it turns out only set the stage for Scott's 4th quarter heroics, which started with a 63 yard touchdown pass to Austin Hill, who had 9 total catches, for 179 yards and 2 scores.

The win improved Arizona's season record to 8-5, their best campaign in 14 years. Nevada finished 7-6 for the season.

Despite Arizona being only seconds shy of being out-possessed by a 2:1 margin, Carey probably put away the season rushing title as well. The sophomore All-Pac-12 first team running back who came into the game as the nations's leading rusher actually slightly extended his lead over Nevada's Stefphon Jefferson, who was his closest pursuer. 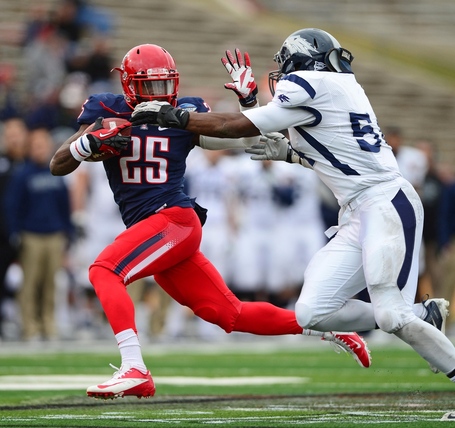 Carey, above, ran for 171 yards, and the 3 touchdowns, on 28 carries, while Jefferson had 164 yards and 2 scores on 33 carries. However a couple of fumbles, including one that Nevada recovered, prompted Nevada coach Chris Ault to pull Jefferson for several series early in the second half, and again late in the game.

Being only a sophomore, Carey could be the best, or at least most productive, back yet in the recent run of Pac-10/12 stars by the time he's done, no small accomplishment given we have seen the likes of Toby Gerhardt, Jacquizz Rodgers, LaMichael James, Chris Polk, Kenjon Barner, and Stepfan Taylor all trample defenses in recent seasons.

It might not be a bad thing for Oregon St. fans that the Beavers will not see Carey, who had 115 yards and 2 touchdowns against Oregon St. in the Beavers' 38-35 win in Tucson at the end of September, up close again unless they encounter him in the Pac-12 Championship game.

The ‘Cats won't get there unless Rodriguez can shore up the Arizona defense, though. Ault's pistol offense rolled up 658 yards, including an all-time bowl record 39 first downs (in a game that saw 70 of them), including going 3 for 3 on the 4th downs the Wolf Pack elected to try to convert, on the ‘Cat defense once known for "Bearing Down" and swarming. 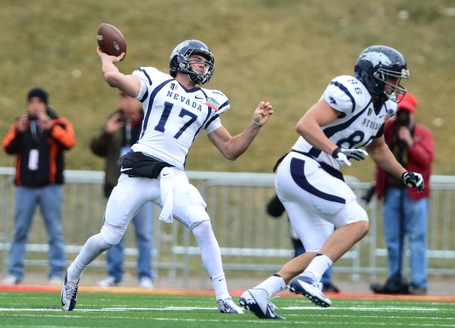 But as Beaver, Trojan, and now Wolf Pack, fans saw, Arizona requires a lot of putting away. And with Carey to build around, if Rodriguez can find a quarterback to replace Scott, and any defense at all, the ‘Cats will remain a threat anytime they are within sight of the lead late in a game.