Q&A With The Rule Of Tree

Share All sharing options for: Q&A With The Rule Of Tree

#13 Oregon St. (#11 in the BCS) faces a 16th ranked (but 14th in the BCS) Stanford team that's just made a quarterback change on Saturday, but is also the best defensive unit in the conference. So there's a lot of twists to a game that potentially has Rose Bowl implications for both teams.

To get Beaver fans up to date on what's happening down on "The Farm", we got together with Scott Allen, editor of Rule of Tree, our brother blog that covers the Cardinal.

You can read my responses to his questions here.

The big story around Stanford is the move to Kevin Hogan at quarterback. Tell us more about his style, strengths, and weaknesses. We understand he is more mobile than Josh Nunes, but will that be used as a weapon, or more just for self-defense?

Hogan's only seen significant action in one game -- and it was against lowly Colorado -- but he was extremely accurate, spread the ball around and made plays both in the pocket and on the run. Hogan's mobility and Stanford's strong running game could mean we'll see a few play-action bootlegs from Stanford on Saturday.

As for Hogan's weaknesses, while it didn't really show last week, he's inexperienced. David Shaw says he has a grasp of about 80 percent of the playbook. He'll be at home, which should help calm his nerves, but this should be a much more competitive game and he'll be facing a far better defense.

Will coach David Shaw stick with Hogan at least for this week's game if he runs into a rough stretch? Or will we see a move back to Nunes at halftime if, say, Hogan throws 2 first half interceptions and is only completing 45% of his throws?

I don't think Shaw would make that move. He gave Josh Nunes 8+ games, which included some brutal stretches. Hogan's earned the right to finish what he starts this week. 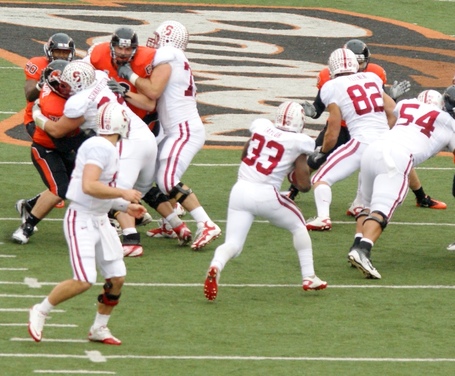 Last year, Stepfan Taylor (above, photo by Andy Wooldridge) almost single-handedly took over the game against Oregon St. in the second half, and he's obviously the Cardinal's first choice as the "go to guy" when the going gets tough this season. But if he can't carry the day, who else is there that Stanford will turn to as the leadership personality and playmaker all in one?

If Taylor can't find much running room, that probably means that none of the Cardinal RBs are having much success, so the pressure will fall on Hogan. He has a couple of playmakers in tight ends Zach Ertz and Levine Toilolo, and fullback Ryan Hewitt was a reliable weapon against Colorado. Senior wide receiver Jamal-Rashad Patterson has also made some big plays over the last two weeks.

These are the top 2 defenses in the conference. If the game is going to see much scoring, how will it happen against Stanford? And what would the Cardinal have to have done if they get some big numbers on the board?

For Oregon State to have success offensively against Stanford, the Beavers will have to protect Cody Vaz. When opposing quarterbacks have time in the pocket, they've had good days. Arizona's Matt Scott dissected the Stanford secondary and beat the Cardinal the deep a couple times, while Wazzu's Jeff Tuel also put up solid numbers.

On offense, Stanford needs to take what OSU gives it. If the Beavers stack the box to stop the run, Hogan needs to be as accurate as he was against Colorado and make them pay.

Speaking of defense, everyone knew about Oregon St.'s Jordan Poyer before the season started, and its no surprise he's the conference's leader in interceptions. But Stanford's Ed Reynolds was way under everyone's radar, yet he's #2 in the Pac-12. Tell us about Reynolds, what his role in coverages usually is, and how he has been able to become a difference maker.

Reynolds turned heads during the spring after missing all of the 2011 season with a torn ACL. Shaw singled him out as the Cardinal's best safety in spring camp and defensive coordinator Derek Mason praised Reynolds' ability to handle the mental aspects of the game. He's a classic ball-hawk with good hands who has made the most of his opportunities this season.

How will Stanford play it against Oregon St.'s receiving duo of Markus Wheaton and Brandin Cooks, whom no team has been able to run with? Will the Cardinal use their talented LBs a lot in complex coverages so that the dbs can double Oregon St.'s speed? Or will Stanford just unleash them and try to get to Oregon St. quarterback Cody Vaz with blitzes before he can get the ball off? (He was sacked 6 times by ASU.)

I think Stanford will opt to try to put heavy pressure on Vaz. The Cardinal secondary has tackled pretty well this season and they'd much rather Vaz be forced to check down to shorter throws than to have to cover deeper routes. That was one of the keys to the win over USC. Stanford managed to keep Marqise Lee and Robert Woods in front of them, and prevented either receiver from turning short passes into big gains. Deeper passes, though, are always an adventure for this group.

The Cardinal control their own destiny to the Rose Bowl, as do several other Pac-12 teams. But with a run of Oregon St., Oregon, and UCLA to close out the campaign, all ranked teams, its also possible that Stanford could play 3 of their best games of the season, and still wind up 7-5, and up the street in the Kraft Macaroni Bowl. What has Coach Shaw done specifically to prepare for this critical stretch run? And what does Tree Nation see as the minimum acceptable outcome of the rest of this season?

The most important thing that Shaw has done is make the switch at quarterback. Stanford wouldn't have gotten to this point without Josh Nunes. The Cardinal probably wouldn't have beaten USC and Arizona with anyone they have but Nunes under center. Hogan, though, could provide the jolt the offense will need to compete for the Pac-12 North title over the next three weeks.

I don't think any Stanford fans realistically expect the Cardinal to go to Eugene and win, but a 2-1 finish could put Stanford in the Rose Bowl discussion. Going 1-2 in these last three games wouldn't be the end of the world, but it would be pretty disappointing given how dominant the defense has been.

As noted, there are several significant games still to come for all concerned, but there are also several scenarios where this game could turn out to be for a Rose Bowl berth, even if one or both of these teams ultimately lost to Oregon. And its Stanford's senior day. However, its also a very early noon start. Beaver Nation is coming in force, but what will the crowd and the atmosphere be like Saturday? Will "The Farm" be its usual sleepy self, or is the Tree going to try to take the chain saw away from Benny?

The World Series is over and the weather's supposed to be pretty nice, so there's really no excuse for Stanford fans (and Beaver fans) not to fill the stadium. The crowd won't be as electric as it's been in recent years for the USC and Oregon games, but you're right, there's a lot on the line for both teams.

I know I'm happy that Hogan's first start is coming at home as opposed to Corvallis. I think he'll be able to settle into a rhythm, the Cardinal D will put heavy pressure on Vaz and Stanford will manage to pull out the W to stay in the Rose Bowl hunt. Should be a great game.

Looking forward to the trip down and the game!