Oregon St. comes home for Dad's Day Night after suffering their first loss of the season last Saturday night in Seattle, falling 20-17 to Washington. The Beavers face Arizona St., a team coming off a couple of losses, including a 45-43 home loss to UCLA last week when the Bruins connected on a game winning field goal as time ran out.

So both teams, after fast starts, are at something of a cross-roads in their seasons as November starts, which is pretty common in this conference. Win and you can set up a strong finish to the year. Lose and the season could get away quickly.

The last couple of years not withstanding, Oregon St. under coach Mike Riley has generally faired pretty well down the stretch from 2003 through 2009, the Beavers under Riley went 29-13 after Halloween), while Arizona St. has stumbled a number of times, especially under Dennis Erickson.

But there are a lot of differences this season. The Beavers got off to their best start in 105 years, with a fast start Riley is definitely not known for. And the Sun Devils are now coached by Todd Graham.

Oregon St., who enters the game as a 4 point favorite, is as healthy as they have ever been this late in this season though, and that's as important a factor as any when it comes to winning in November. Arizona St. has a notable lack of depth, which has the potential to derail them despite the efforts since he arrived in Tempe that Graham has made toward both mental and physical toughness and discipline.

Its the third consecutive night game for Oregon St., but the weather is going to be better than last week's deluge in Seattle, and that's got to be good for the offenses.

Oregon St. will start Cody Vaz at quarterback. Vaz, led the Beavers to wins over BYU and Utah while Sean Mannion, who had directed the season's 4-0 start, rehabbed a knee injury, and took over for Mannion in the 4th quarter last week against Washington, after the Huskies had picked off Mannion 4 times.

Vaz led Oregon St. to a game tieing touchdown, but couldn't get the Beavers into scoring position again after Washington went ahead on a field goal with only 1:20 left in the game.

Arizona St. has long since put a 3 way quarterback competition in the preseason and early games away, as sophomore Taylor Kelly has emerged as one of the conference's top quarterbacks. Kelly has already thrown for over 2000 yards, and 19 touchdowns, against only 5 interceptions, though he has also been intercepted 19 times. (Jordan Poyer alert!)

Kelly, operating the spread read option at a high level last week against UCLA, completed 25 of 35 passes, for 315 yards and 4 touchdowns, and also ran 14 times for 55 yards. He got a lot of help from freshman running back D.J. Foster, who caught 7 of the passes, for 105 yards and a touchdown, and also ran for a team high 61 yards, on 13 carries.

Oregon St.'s defense, which has had more than a little trouble dealing with mobile quarterbacks, even this year, will have to contain both Kelly and Foster.

Despite the emphasis on the two offenses, its worth remembering that these are the conferences' 2 best defenses. Arizona St leads the league, allowing 322.0 yards per game, with Oregon St. right behind, in second at 344.1. The game also features the Pac-12's 2 leading sackers, as the Sun Devils' Will Sutton tops the conference, with 8.5 while the Beavers' Scott Crichton is second , with 8. (Assuming Sutton, who missed the UCLA game, and all but the first defensive play of Arizona St.'s game the week before against Oregon, with a bone bruise to his knee, is able to return to action tonight as expected.)

Arizona St. won last year's meeting in Tempe 35-20, as Mannion completed 40 of 66 passes, both Oregon St. records, but also threw 4 interceptions (there's that number again). The Sun Devils also overcame 4 turnovers of their own, including 3 interceptions of Brock Osweiler, the first 2 of which were by Poyer in the first quarter.

However, the Beavers didn't capitalize on opportunities, settling for a pair of first quarter field goals. A pair of Osweiler touchdown passes and a punt return for a score in the second quarter erased a 13-0 Oregon St. lead, and though the Beavers pulled within 21-20 on a touchdown catch by James Rodgers, the Sun Devils pulled away on a pair of Cameron Marshall touchdown runs. 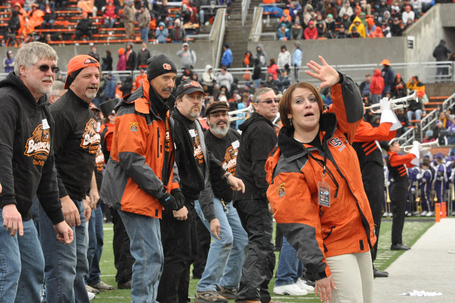 It's Dad's weekend, and another crowd at or very near capacity will be on hand to cheer on the Beavers.

Buildingthedam.com will be at the game (including entangled again this year in the "Dancing Dads" portion of the halftime show), and will be back afterwards (if we survive) with complete coverage and analysis.

Meanwhile, join in with your cheers and analysis with the rest of the tv viewing crowd.