Oregon St. starts a three game home stand to finish the regular season tonight, with the second and last "blackout" themed game of the year. Having lost 2 of their last 3 games, both on the road, the Beavers need to capitalize on the Reser Stadium advantage to finish the season strong, and avoid being relegated to one of the relatively mediocre bowls at the end of the Pac-12 Conference's list of tie-ins.

California has been plagued by injuries, which have played a key role in the Golden Bears collapse down the stretch, in which they have lost 4 games in a row, culminated by last week's 59-17 trashing by Oregon, the worst loss in the history of the California program.

As a result, the Golden Bears were eliminated from any possibility of any post-season play, and assured of a losing record before Halloween. That's got head coach Jeff Tedford, who is the winningest coach in California football history, but has posted losing seasons in 2 of the last 3 years, headed for a meeting the first of the week with California Athletic Director Sandy Barbour, amidst wide spread speculation (and calls) that Tedford be fired, with today's game the end of his era in Berkeley.

The Beavers will go to Sean Mannion at quarterback, in what will be the 4th change of starter at the position this season, after Cody Vaz suffered a twisted ankle on the next to last offensive play that Oregon St. ran last week at Stanford, in the Cardinal's 27-23 win.

The Golden Bears are without WR Keenan Allen for the third game in a row, and don't expect that Allen's brother Zach Maynard, who has been the usual starting quarterback the last 2 seasons, until he suffered a knee injury in California's loss to Washington. But those are just 2 on a list of Bears that runs well into double digits who have missed starts this year for California. Allan Bridgford took over last week, and will again get the call if Maynard doesn't make a miraculous recovery.

With the quarterback shuffle settled, Oregon St. enters the game as a 14 point favorite.

Last year, California dominated the Beavers 23-6, as Isi Sofele ran wild for 190 yards. But before that, Oregon St. won 4 in a row, 5 of 6, and 10 of 12. The series may be the streakiest in the conference, something you wouldn't expect given the closeness overall, which California leads 34-30.

California then won 3 straight, and 9 of 10 in the 70s and early 80s, followed by a 4 game Oregon St. winning streak. The Golden Bears then dominated the 90s, winning 6 in a row, before the Beavers recent run of 8 wins in 10 (now 11) games. Was last year the beginning of another swing to Cal, or one of those blips in an OSU run that's still got some wins to go?

Hopefully (for Beaver fans), Scott Crichton can earn another ESPN helmet sticker. Here's the t-shirt he received from the Gameday crew: 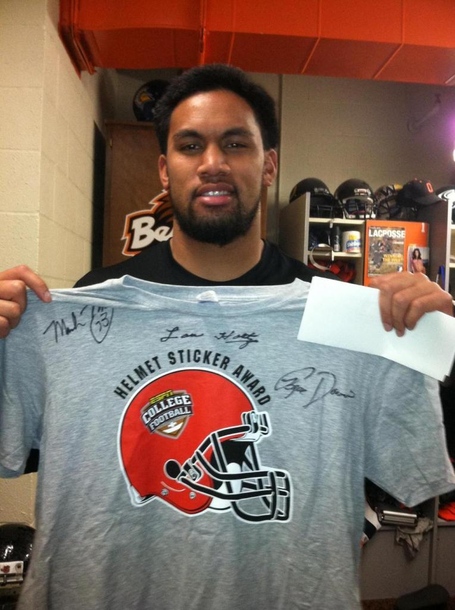 If you are coming out tonight, its going to be a cold, wet, breezy night, with temperatures in the 40s, and rain predicted, for what is the 5th. night game this year for Oregon St.

If your not going to be at the blackout, here's the place to discuss the developments of the evening from the warmth of their living room, if you have the Pac-12 channel, or some sports bar.

Buildingthedam.com will be at the game, and back afterwards with complete coverage and analysis.