Led by Ahmad Starks, the Beavers recover from a slow start to get a 71-62 victory.

A non-conference opponent from a lower conference. Four players that stand 6'10" or higher against an already poor rebounding team. And a forward coming out of nowhere that drains mid range-to-three point shots consistently. Beaver fans had been here before, against teams like Texas Southern, Sacramento State, and Montana State (and whoever else you can think of).

For a while, it looked as if Oregon State would suffer the same fate once again. But down 18-12 just over ten minutes in, the Beavers went on a 22-6 run to kill Aggie morale and gain a double-digit advantage.

Oregon State looked slow and sluggish in front of a sleepy Gill Coliseum for those first ten minutes, but an influx of energy provided by Ahmad Starks and Joe Burton proved to be the turning point. Trying to match that energy, New Mexico State head coach Marvin Menzies picked up a technical with just 2:50 left in the half. The ensuing free throws gave Oregon State its first ten point lead of the game.

Despite NMSU's best efforts to slow Craig Robinson's potent offensive attack down, the Beavers still hung a 41 spot on the Aggies going into the locker rooms. A pair of Bandja Sy free throws with 20 seconds left made it an 11 point halftime lead.

Starks was the key to Oregon State's win all night long. Whenever the Beaver offense appeared to be stuck in a rut, the diminutive point guard would nail a big three or slash into the key and put in a floater off the glass. He ended with a team-high 33 points. 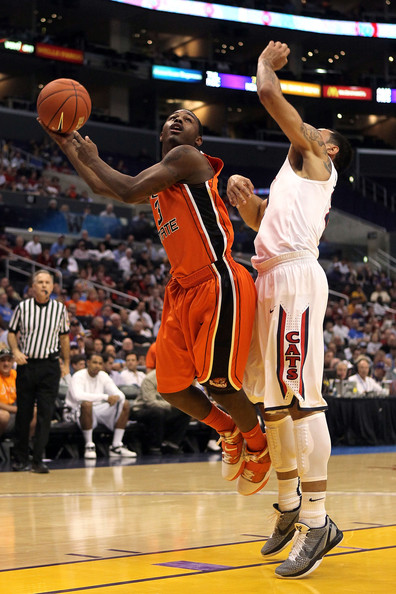 Many Of Starks' 33 Points Came On Floaters Like The One Above Against Taller Opponents (credit: Stephen Dunn)

The surprise of the night belonged to Joe Burton, who finished with 13 points and a thunderous, one-handed reverse dunk. Burton still needs to limit the running hook shots that are absolute possession killers, but other than that and his late turnover, he had a great game.

New Mexico State was able to trim the lead to eight at two points in the second half, but the Aggies never got closer than that until a Renaldo Dixon dunk with 1:35 remaining. After the aforementioned Burton turnover with 35 seconds left, a breakdown in the Beaver defense left Terrel de Rouen wide open to cut the deficit to three. But Rouen's shot would clank off the iron, handing the Beavers a 2-0 record along with it.

This was Oregon State's first of ten games to be televised on the ESPN family of networks in 2012-13. Roxy Bernstein and Tim McCormick had the call for ESPNU.

Next up for the Beavers is their Championship Round semifinal against Alabama on Thursday afternoon in New York City, while the 0-1 Aggies will face Southeastern Louisiana on Thursday in in Las Cruces.