The Story At Oregon St. Shifts From In-And-Out To Blackout

Share All sharing options for: The Story At Oregon St. Shifts From In-And-Out To Blackout

As most members of the Oregon St. community know, one of the light-hearted stories of the football season has centered around the post-game stops for In-And-Out burgers (with fries) that head Coach Mike Riley has made to celebrate first the team's road win at UCLA ("Can I get 200 double-doubles to go?"), and then last weekend's victory in Tucson over Arizona (when the happy Beaver contingent polished off 275 double-doubles, as well as some shakes), which earned the Beavers a share of first place in the Pac-12 North, and elevated Riley to be the winningest football coach in school history.

Those same football fans also know that the Utah Homecoming game on Oct. 20 and the visit from California on Nov. 17 were to be "blackout"games, with everyone encouraged to wear black to the game to match the team (contrasted with wearing orange to the other 5 home games). After all, its printed right on the tickets already distributed to those games. 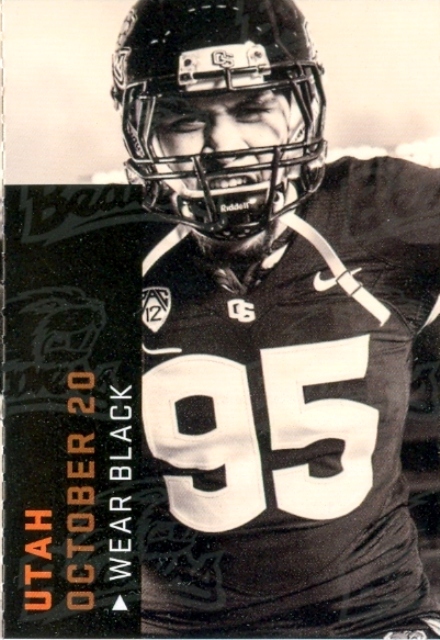 "Blackouts", "whiteouts", and even tri-color "outs" (see Boise St.), have become a popular way to organize the fan base into a united look to greet visitors, and promote school spirit. Sometimes that's a stretch, when black isn't a school color, but of course that's just as much of a non-issue at Reser as orange is, since orange and black have long been the "regular" official colors, and don't require "alternative" uniforms, helmets, or t-shits.

So a couple of blackouts, which have been successfully done before at Oregon St., seemed like a natural.

Then, the ASOSU got involved. ASOSU (the Associated Students of Oregon St. University) is a student organization, but not one that all students participate in (though it is available to all of them), despite what the name might suggest.

Last Friday, the Daily Barometer, the on campus newspaper, ran a story that reported that some students extrapolated that wearing black at games could for some reason result in racially insensitive behavior.

Don't be surprised to see people wear a black t-shirt or hoody to Homecoming, however; after all that ticket tells them to.

It's an interestingly rapid response from the same people who needed to hear for years what their customers wanted in some cases before responding.

It's also an interesting idea that the school color black must necessarily imply such a message in the normally unspectacular community that is Oregon St. and Corvallis.

Especially given that this hasn't been a problem in Seattle, Eugene, and Salt Lake City.

The Huskies have done it multiple times, and on both sides of town, at Husky Stadium on campus and downtown at Century Link Field. And Seattle is unchanged afterwards! They still have an intractable traffic problem, expensive seafood, and bad baseball.

Oregon St. survived a blackout last year in Salt Lake City, and those of us who were there know the only thing that was scary was the Utah defense. But the Utes can break out the pastel polka-dot uniforms, and Star Lotulelei and the Kruger brothers would still be just as big, fast, and scary.

The Beavers will probably also survive the trip to Provo next weekend, where BYU is even breaking out brand new Nike designed black uniforms and helmets for the occasion.

And while no problems seem imminent on arguably THE most conservative college campus in the country, its also proven that a blackout can work at Stanford. Stanford!

Yet Oregon St. can't handle it?

It certainly seems that there are more important issues in discrimination that are worth tackling, as well as more productive ways to do so. And it should be possible to have fun here too.

Worse, until the franchise is extended to the north, I can't even get an In-And-Out burger to eat while pondering the deeper meaning of a color chart before we go to BYU (there's one in West Valley), as the nearest one to Corvallis is in Redding, and I won't be going through there until the trip to Stanford in November!

The Story At Oregon St. Shifts From In-And-Out To Blackout