Four OTs and a Loss and 1 and 3 start in the Pac: A Quick Other Take on Last Night's Game

Share All sharing options for: Four OTs and a Loss and 1 and 3 start in the Pac: A Quick Other Take on Last Night's Game 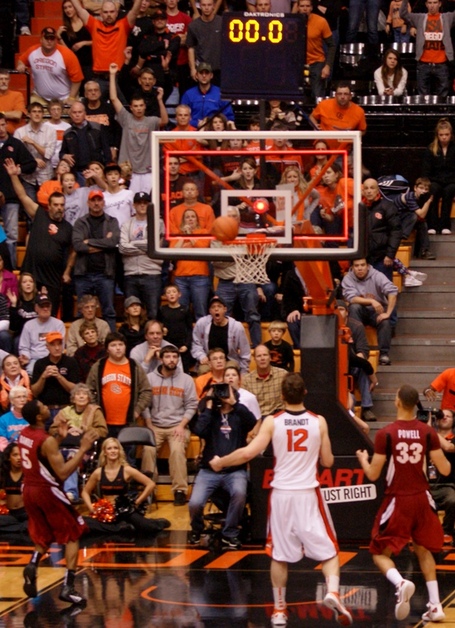 I was at the game last night and wanted to offer my quick thoughts about the outcome. No [more] pics though, just opinions sorry!

I can understand a good amount of the frustration that I'm reading so far posted here. Granted it was a game that the Beavs had their chances to win, but as disappointed as I was with it all I also think jumping ONLY on the negative criticism wagon for this game does do the team a little disfavor with how much they put it on the line.

This is what over 3 hours of basketball came down to. (Photo by Andy Wooldridge)

Now on the critical side of things I think the State of WA trip was problematic in putting the Beavs in a hole and I do NOT like that now they are 1 and 3 in the Pac when they could (should?) be 3 and 1 if not 4 and 0 (but could've, should've) , but really for what it was that was a game last night with two fairly equally matched teams having moments both good and bad and basically going for blow for blow with each other for an hour of play time and over how many total hours I cannot even remember thinking back to the haze of sitting in the hot stands watching that marathon.

I won't sugarcoat it all for I think it was sloppy and yes they should have put away the Cardinal there a couple of times in regulation, but at the same time the Cardinal had their chances too and they aren't a horrible team. It was a game that this team wouldn't have held a candle in last season for sure. I know my expectations were jacked up a bit with the non-conference play but really did we not expect some games to get away from this team this year? And why not make it get away in an epic battle down to the wire? Better this than a 35 blow out like we would have got last year. I'm not going to go into the details about the team stats and individual player play for I think that Andy did a wonderful job in his write up below, but will say I disagree a bit with some of the conclusions about the play.

Such as I disagree with this:

With 3 Stanford starters already disqualified, and Powell with 4 fouls, the longer the game went on in front of crowd of 7,239, over 7,200 of which were Beaver fans, the more the situation favored Oregon St. in the war of attrition

Favored? The Beavs were exhausted at the end and Stanford funny enough was forced into fresher players and this led to the Beavs just not having that extra step as the OTs progressed. And if you all think this unacceptable you try going out and playing in a four OT game. I haven't even played in a double OT, but I will say I unequivocally believe it isn't easy. I mean this was one of those weird games where a team having their main players foul out might have gave them the advantage in the end to pull it out. I don't want to be one of those but I'm going to anyway (maybe the lingering haze effects of the game have my judgement all askew, I'll let others judge me on that though) and say have you all played basketball? Playing for 30 to 35 minutes is hard enough let alone going 40+! I know I was exhausted during and after the game from just watching and cheering, I can't imagine what it was like for the players and coaches.

I actually have no issue taking it to the team a bit for the OVERALL conference start this season for I think they are better than their record states right now and they have the expectations in place themselves, BUT I think it is a bit much to question how the game went especially once it went into OT. Regulation maybe for I think there were some moments that very much got away from the team but in that crazy OT really for us in the stands or watching on TV can't say this or that for all bets were off IMHO and it was just going to be what it was going to be. I mean Stanford totally should have put the dagger in the Beavs in that last one and they couldn't . Let's not get all on the Beavs for playing under themselves for they came back multiple times to even have that shot at winning it in the end.

I mean heck as much as it pisses me off to do so I have to give some big time props to the Cardinal too. That was not an easy game.

And even though we lost the game I am actually glad I saw it. For as a basketball game it was pretty darn exciting and can't say I've ever remember seeing a basketball game quite like that one or doubt I will anytime soon.

I know again it may seem like I'm just in my rvm making excuses mode (keep rolling your eyes at me, nod your head in agreement with my self assessment, and so on here), but really the team needs a little props for playing a game like this all the way through. I KNOW it was a hard one on them physically and I'm pretty sure it is a really hard one on them mentally. In my very personal opinion I just think we need to be focused in our critical fan mode with the conference start, but let's also give our team a bit more props for laying on the line for us in this game. But as always take this all how you want for it is just my opinion.