Share All sharing options for: Oregon State Women's Basketball: Update for the 2011-2012 Season 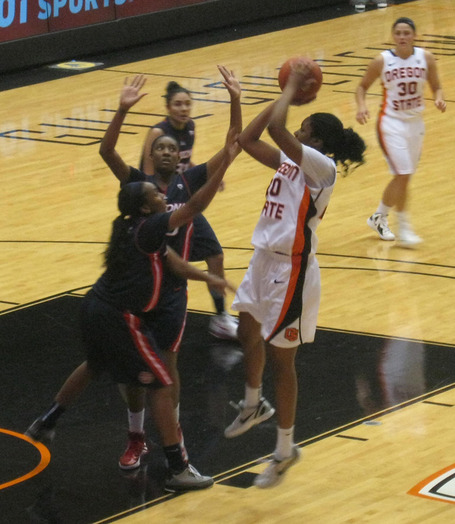 With most of the attention being garnered by the men's team (both good and bad so far this season) I wanted to take a moment to update everyone on the women's season so far. Not totally sure it is the mid-way point overall, but the women are also on the final stretch of their 2011-12 season.

The women this season are also having their struggles in conference play with a record of 3 and 5. Much like their counterparts the men the team started out well in non-conference play going 9 and 2 and winning their first six games (including a non-record counting exhibition game). Funny enough the women also have paralled the men with some tough conference losses, such as a double OT loss to Washington State and a last second loss to Arizona. At the same time they have had some impressive overall performances such as beating Arizona State and playing the 4th ranked Cardinal tough in a 67 to 60 loss that the Beavs were winning at half time (35 to 31).

I was at the Arizona loss and it was interesting in how much it reminded my of watching the men's team this year in that the Beavs and WIldcats played a pretty rough first half, then things got going in the second half and actually looked as if OSU was going to take control, but then some sloppy last minute play and execution on both sides of the ball ended in a heartbreaking loss much like what happened when the men played Arizona! But from my brief observations this season I was impressed with the inside game of the Beavs, especially on defense such as Patricia Bright (featured in the upper right) who has a mind-staggering 66 blocks to date! (But wow is women's basketball officiating the polar opposite of men's in that they actually let them play?!?) 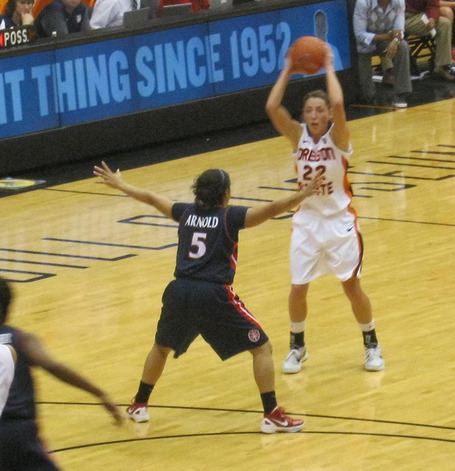 Some highlights so far this season for the Beavs include: Patricia Bright's average of 3.5 blocks per game that leads the Pac-12 and is fourth in the country (and is the sixth-most in a single season challenging the record set last season by El Sara Greer). Sage Indendi (right) making her 100th career three-pointer (now is at 102). And the team's leading scorer being Freshman Ali Gibson. Additionally for the most part, except for two games (losses to pretty good St. Marys and California teams), the team has not lost games by large margins and have been in the middle of almost all their games. Of course all these individual accomplishments and team minor victories does not mean they will all end up translating into a winning record, but the signs are there for a possible strong final run this season.

Following are some season stats and a few more pics, and just to note that women's Civil War game will be televised live this Saturday on FSN at 4:00 in what looks to be an important game for both teams in terms of conference standings. 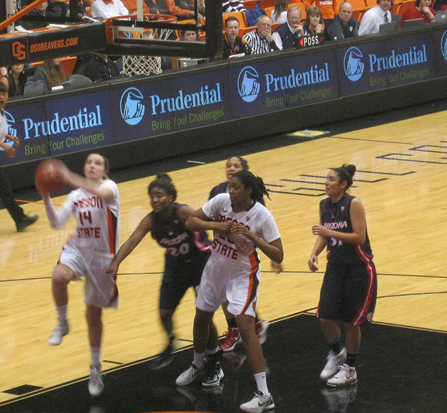 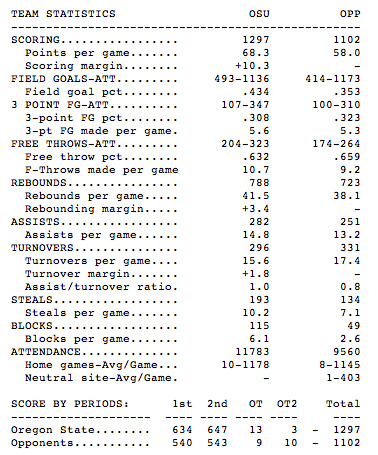 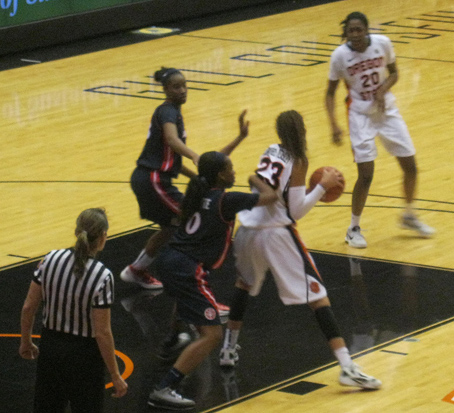 Again it is a bit strange and interesting the ways in which both basketball teams this season started strong, have had issues in conference play, and in general are teams demonstrating inconsistent and frustrating swings of performance. One good example is how the women snapped an 18 game losing streak to ASU this season just as the men snapped their losing streak to UCLA. Overall the women, much like the men, still have a chance to make a run to a postseason berth (NIT being the best bet), but it is going to take a good amount of work and the women's team needs to find some consistency and confidence playing to their strengths that to me look to be their in the post game.

And again remember the CW game is coming up this Saturday at 4:00!