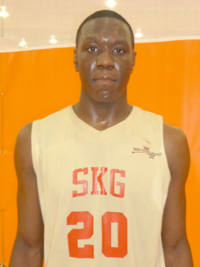 Everyone was sweating anyway in the 90 plus degree heat Saturday, but Oregon St. mens' basketball coach Craig Robinson was doubtless doubly sweating it out when the football team found a way to lose to a FCS opponent in Sacramento St. Robinson probably figured a sure win would be a good time to show prospect Jarmal Reid a good time.

Fortunately, Reid, a 6'7", 215 lb. combo forward from Columbia High in Decatur, Georgia, still decided he liked what he saw enough to commit to come back to Corvallis next year.

Reid has played for the Southern Kings of Gold AAU program as well.

ESPN ranks Reid 52 nd. nationally among all small forwards in the 2012 class.

Reid, a 3 star recruit in Rivals.com's ratings, and a 2 star prospect according to Scout.com, becomes the second recruit for Oregon St.'s 2012 class, joining post player Maika Ostling from Dayton.