"This is kind of how the game went."

Share All sharing options for: "This is kind of how the game went."

"I told Danny (Langsdorf, offensive coordinator) run the ball to the MIDDLE of the field, then call time out with four seconds to go," Oregon St. head coach Mike Riley explained. "Somewhere along the way, we have a young quarterback in there, and he gets the wrong direction call. I found that out when he came off the field. We wanted to place the ball in a better position to kick it."

Nothing there but confirmation of the obvious. But also nothing that doesn't happen at some point in every game, to every team. The differences, of course, are when mistakes like these happen, and whether enough other things have not gone wrong so that there is enough margin of error to survive it.

"It wasn't a long kick; Trevor should make make that kick," Riley admitted. "He just pushed it a little to the right.''

There were plenty of similar conversations Saturday evening and Sunday around Beaver nation, about a number of little details that could have gone better. Far more than there were about the things that did go well, of which there were quite a few as well.

Conversation always swings as wildly as the outcome whenever weeks of work comes down to a matter of an inch, or a second, and this time it may be as massive a swing as Oregon St. has seen.

Has a running back turning in an NCAA leading performance ever been discussed less? Has it even happened in the first game by a true freshman? 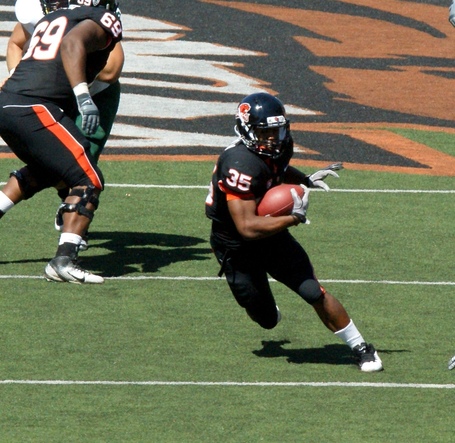 Malcolm Agnew's day is, and should be, the biggest reason for optimism for some success going forward for Oregon St. What better defenses armed with awareness will do about it remains to be seen, but the good news for Beaver fans is that Agnew's numbers were not a product of something fluky. Agnew cut aggressively into gaps, and demonstrated strength and durability, packing the ball 33 times. His longest run was for 30 yards. No inflation of the 223 yard total by one length of the field breakaway, something a lower division defense sometimes allows.

It's not bad news for the rest of the running back crew either, as Riley said he still intends to use the several weapons he has in the backfield while trying to sort out the unexpected quarterback situation, where junior Ryan Katz, benched at halftime of the Sacramento St. game, is still considered the starter, but Riley will be giving serious consideration to Sean Manion, who did his part in rallying the Beavers.

Jordan Jenkins had 4 catches for 55 yards out of the back field, and Jovan Stevenson had a pair of catches as well, a further sign that "running back by committee" will be running back by specialty, a luxury a lot of teams don't have. Riley also said Terron Ward, who only saw action on special teams, will still get work in the back field as well.

With highly ranked Wisconsin and UCLA next up, both of whom showed considerable offensive production, the ability to run the ball, and also generate passing yards out of the backfield will be critical for Oregon St.

Maybe even enough to keep things close enough to give Romaine another shot at a game winning kick.