Share All sharing options for: Final Thoughts On Opening Day 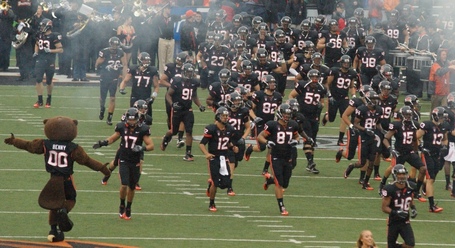 After months of covering injuries, suspensions, contracts, off field excursions, schedule inequities, expansion, NCAA investigations, and everything else not football, we finally get to WATCH FOOTBALL! All this has been important, and necessary to cover, especially in what has been a particularly messy off season, locally and across the country.

But Beaver Nation, and football fans everywhere, want FOOTBALL! We want to munch something tasty before the game. We want to listen to the band, and watch the cheerleaders. We want to wear team gear. We want to see the team run onto the field, and play ball all afternoon long. We want to hear the chain saw. We want fireworks. We want to cheer and clap and yell and jump up and down. We want to get together after the game for more to eat and drink. And we want to watch other important games on tv.

It's why we work through all that other stuff!

Oregon St. has an enormous number of new faces who will be starting for the first time, and many playing at the collegiate level for the first time. Expect some glitches as a result. Nerves and inexperience don't go with masterpieces.

Further, with much tougher opponents coming up soon, coach Mike Riley won't want to show them too much, especially if it isn't necessary to beat the Hornets.

So a fairly vanilla overall game plan is going to be in the works.

But Riley is a football fan too. Expect a couple of shots at a big play to be sprinkled in.

Also look for a concerted effort to get the running game tuned up. Radio voice of the Beavers Mike Parker (who will be about the only one calling the game, with no tv) will call Malcolm Agnew's name a lot. Color analyst Jim Wilson and fans in the stands will wear out their roster getting acquainted with a slew of new names and numbers.

The experienced set of senior skill players Sacramento St. has will make some plays against the revamped Oregon St. defense as well.

Oregon St. opened as a 27 1/2 point favorite, and taking Sacramento St. to cover might be a good bet. Riley isn't one to run up the score, especially against an ex-Beaver (Hornet head coach Marshall Sperbeck), preferring to play more players. And that's under the best of circumstances, which this game isn't, due to the injuries and youth.

But in the end, the Beavers have too much talent for the Hornets. And Ryan Katz will remind everyone that there are still some experienced veterans on this year's squad. Oregon St. 34 Sacramento St. 16.

The key to a nice, easy victory will be scoring quickly and scoring often, like the Portland State game two years ago. Sacramento State is going to come in as confident as they can be after hearing about a fall camp full of injuries for the Beavers, and if the Hornets score first then we might have a big problem on our hands.

I think that Ryan Katz and the rest of the Beavers forget to wake up, and the Hornets are up by 7 before they even realize that the season has started. After that the first half should go back and forth, with the Beavers taking a three point lead into the locker rooms.

The third quarter is when Malcolm Agnew really turns it on, rushing for a pair of touchdowns to give Oregon State some breathing room. The Beavers do have to leave their starters in for the duration of the game, but the important thing is that they are 1-0 as they head to Madison next week.

Wow, for some reason this season sure has come around quickly. Maybe coming into the season my expectations overall were a little down this year and as such I haven't been as amped up for the opener, but as it continues to get closer and with last week getting my tickets for Saturday's game my excitement has increased.

As we here on BtD have already discussed this last week so many of the games this year seem to be either toss-ups or Beavs coming in pretty big underdogs. This could bode well with the Beavs and Mike Riley once again flying under the radar to sneak up the standings and make a good run at things, or it could mean OSU football is never is able to break out and find its stride in a competitive season of games. What I think right now, and yes my view could change quickly, is that many of this year's games are going to be fairly close and exciting, much like 2006, and that we will be pleasantly surprised with the team.

Sacramento State? I actually think this is not going to be a close game at the end with the Beavs pulling away in the second half to win by a decent, but not overwhelming, margin. BUT I also don't think this is going to be a "push over" type of game and the Hornets are going to play a competitive and tough game. I know all the press coming in is about OSU's lack of depth right now, but I just think the Beavs are going to be the deeper team and that will be a big difference in this game.

Additionally if the crowd ends up being as large as it sounds it will be, there will be some young nerves at play for the Beavs and we are going to see some rust and tightness in the play. I think though the offense will settle down in the second half and get Agnew in a breakout game mode (but maybe that fully happens in Madison for Agnew). I tend to think Katz will try a bit too much in the beginning but will also settle down and give us a solid performance.

Some specific game questions I have coming into this one:

1. What type of team is Sacramento State bringing? How tight or loose are they going to be with a large crowd and being the underdogs?

2. Is there really a big issue with the lack of depth on this OSU team, or is that a bit of a "guys keep your focus" deal by Riley so the team doesn't overlook the Hornets to the Badgers? As such can this on the field team Saturday wear down the Hornets like they should?

3. Will the running game look pretty much like it hasn't lost a step with the loss of Quizz? Will it look different?

4. Will the defense bring to the game the speed and intensity we have come to expect from OSU football but didn't really see last year?

5. Will the coaching staff show us some new looks this early in the season or are they going to wait?

6. Is RVM finally pretty excited about the 2011-12 football season? Oh, I guess I've answered that one already! Yes I am!

To conclude a bit, and to repeat some of my previous comments last week, this OSU team is a pretty big unknown coming in this season. Riley pretty much promised that we would not see a repeat of last season and an improvement will happen. Tough promise in a new conference alignment and what seems like some big time conference parity within the middle area of the conference, and with two really good teams heading up their runs at the Pac-12 championship and both these teams being in the North Division with the Beavs.

At this time I think in a very realistic look at the season the team has four "likely" losses to Wisconsin, Utah, Stanford, and UO. But again I feel most of the other games are toss ups, except for Sacramento State and WSU and these two are not total slam-dunks. I also think at this time that this Sacramento State game could actually be a good barometer game for the first half of the season and I believe it is a pretty important game. So Mike this is your first step towards fulfilling your promise, and thinking about the season more I am expecting a lot out of you and your team this year.

So lets all go out to Reser and root for the Beavers!