Share All sharing options for: Speed Kills In Week 4

Speed Killed in the big games in week 4 in the Pac-12. In several games, turnovers did too.

LaMichael James lit up Arizona in Oregon's 56-31 win over the Wildcats in Tucson. James' 23 carries resulted in 288 yards, an Oregon single game record, and a pair of touchdowns, which broke the Oregon career scoring record. Not a bad night's work. But James added a pair of receptions to take his total yardage from scrimmage over 300 yards, and also 60 yards on punt returns, including a 51 yarder, giving him 363 total yards.

It overshadowed another spectacular performance by Arizona's Nick Foles, who threw 57 times, completing 34 of them for 398 yards, and 3 touchdowns. Foles got no help, however, while James had plenty of it.

Arizona (1-3, 0-1) only mounted 82 net yards rushing, due in part to multiple sacks of Foles, who continues to take a beating, which resulted in his having -42 yards on the ground.

Darron Thomas was only 11 of 20 throwing, for 101 yards, but also 2 touchdowns. And Thomas tacked on a pair of rushing touchdowns as well.

Oregon (3-1, 1-0) exploded to a 35-3 lead by late in the second quarter, but to Arizona's credit, the ‘Cats clawed their way back into the game with 21 consecutive points. However, the Ducks quelled the Arizona uprising, controlling the last third of the game.

It was Oregon's best effort so far, factoring in location and opponent, and the total absence of turnovers was a big factor in that. But the Duck defense continues to give up a spectacular amount of yards, 480 this week, and when they don't have 50 points to work with, its going to get dicey.

Arizona's inexperienced offensive line is still struggling to get a rushing game going, and whether Foles will remain standing all season remains a serious question. The ‘Cats, who also have a terribly porous injury plagued defense, won't catch a break next week either, as Arizona faces an upset USC squad in the LA Coliseum.

Arizona St.'s defensive team speed, and USC's inability to finish first half drives, resulted in the Sun Devils' ending an 11 game losing streak against the Trojans. Arizona St., next week's opponent for Oregon St., made USC trade field goals for touchdowns in the first half, and opened a 21-9 lead at the break.

The Trojans rallied in the third quarter, behind a touchdown pass by Matt Barkley, and one on the ground by Marc Tyler, and took a 22-21 lead just past the midway mark in the third quarter. But a two point conversion rush by Tyler was turned away, and the Sun Devils ran off 15 unanswered points the rest of the way, to claim an impressive 43-22 win, and the drivers' seat in the Pac-12 Southern Division race. 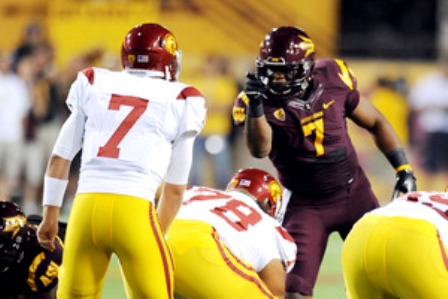 Arizona quarterback Brock Osweiler dueled Barkley about even, completing 24 of 31 passes, for 214 yards, but for 2 touchdowns, vs. only the one by Barkley, who hit on 21 of 33 passes, for 227 yards. But Osweiler took care of the ball, committing no turnovers, while Sun Devils' linebackers Vontaze Burfict, above warning USC quarterback Matt Barkley of what was to come (photo by Getty Images), and Shelly Lyons both picked off Barkley. Lyons took his 4th quarter interception 41 yards for the touchdown that iced the game.

USC also suffered a pair of fumbles, as well as 10 penalties. Meanwhile, Arizona St., who has often struggled with penalties themselves, were only flagged 4 times.

The Sun Devils, in addition to being the first road test for the Trojans, were by far the fastest team USC has faced this season. The win, something of a landmark for coach Dennis Erickson and crew, only made last week's failure to fire in Illinois seem even more out of character. 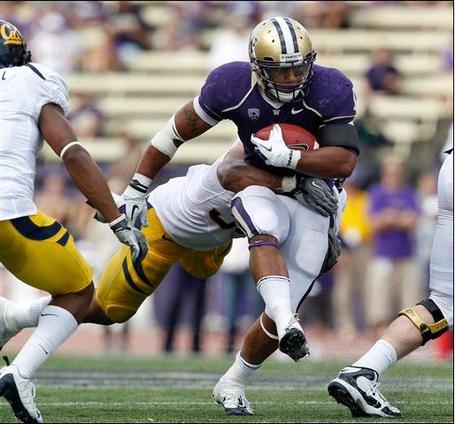 Washington's Chris Polk, above (AP Photo), would be receiving plaudits as the best back in the Pac-12 were it not for James' exploits down the road. The Husky's best player was held to [only] 60 yards, and one touchdown, on 20 rushes, but added 4 catches, for 85 yards, including a 70 yard fourth quarter catch and run for the score that opened the back and forth game against California up to a 31-23 Husky lead. Which the Washington defense was able to protect to the end of the game.

Washington's new quarterback Keith Price continues to shine, and he completed 19 of 25 passes, 76%, for 292 yards and 3 touchdowns. Price easily eclipsed Zach Maynard, the Golden Bear's new quarterback. Maynard threw for 349 yards, but only one score, and completed only 23 of 43 passes, just 53%.

If the Bears are to threaten the upper echelon of the Pac-12, and especially the Northern Division, Maynard's accuracy is going to have to improve.

California (3-1, 0-1), took an early 7-0 lead, on a 90 yard touchdown pass to Keenan Allen, the longest pass play in Golden Bear history, and a 23-21 advantage midway in the third quarter, but Washington (3-1, 1-0) responded to each Bear challenge. And they did so despite their defense getting lit up once again, this time for 457 total yards. It was actually the fewest yards the Huskies have yielded in a game yet this year, but still so many that it kept substantial pressure on the Polk and Price to produce at a spectacular pace.

Colorado (1-3) was the only Pac-12 team to take on a non-conference opponent, and were over-matched in the Horseshoe in Columbus. The Buffs were beat 37-17 by a Buckeye team that was in a bad mood after being beaten up 24-6 by Miami the week before. Colorado fell behind 17-0 before the middle of the second quarter, and only briefly trailed by as few as 10 points after that. The Buffs suffered their 19th. consecutive road loss. 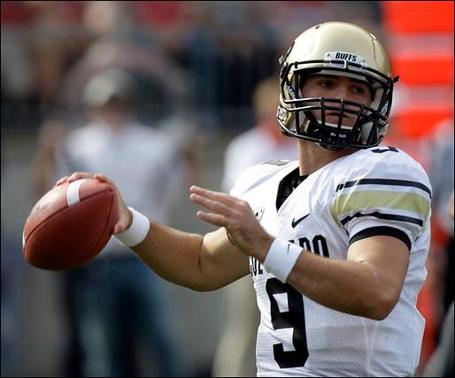 Tyler Hansen, above (AP Photo), threw for 238 yards and 2 touchdowns, and no interceptions, completing 22 of 39 passes. But Rodney Stewart was held to 55 yards rushing, and 27 yards on 5 catches. Ohio St. limited Colorado to 76 yards rushing, while grinding out 226 themselves.

The Buffs, once again physically out-manned by their opponent, have the look of a team that will lose a lot of games they have battled hard in until recruiting some reinforcements can rectify a size and speed deficiency that is hard to overcome with any amount of effort. And when they lose the turnover and penalty battle, as happened against Ohio St., its hard to even keep a game close.

And Oregon St. (0-3, 0-1) lost the turnover and rushing battles, and therefore the game, 27-19 to UCLA (2-2, 1-0). The Bruins rolled up 211 rushing yards despite losing Johnathan Franklin, thanks to a 100 yard game by Derrick Coleman, while limiting the Beavers to just 88 rushing yards. 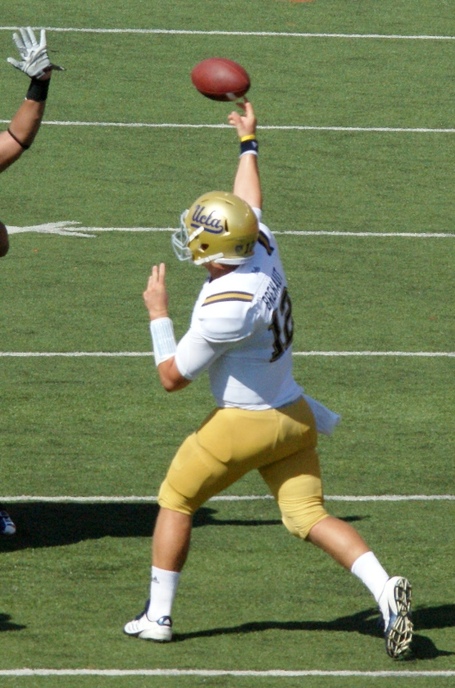 Richard Brehaut, above (photo by Andy Wooldridge) threw only 11 passes, but completed 7 of them, for 146 yards and a touchdown, as well as running for one, for the Bruins. More importantly, he led a turnover free UCLA effort, while Oregon St. freshman quarterback Sean Mannion, despite completing 24 of 40 passes, for 287 yards and a touchdown, in his first career start, also suffered an interception and a fumble, which cost the Beavers enough points to lose the game.