The Pac-12 took another hit in the national perception department in week 3, when Arizona St. and Washington lost road games against Big 10 teams, Washington St. collapsed in San Diego, and UCLA fell to Texas. To be fair, only the Sun Devils were expected to win, and even they were a narrow pick. But it was an opportunity to establish that the conference has some depth to it.

Instead, the ranked Sun Devils lost to an unranked opponent, while the Huskies, Cougars, and Bruins all lost by multiple scores, and had their defenses blown up in the process. 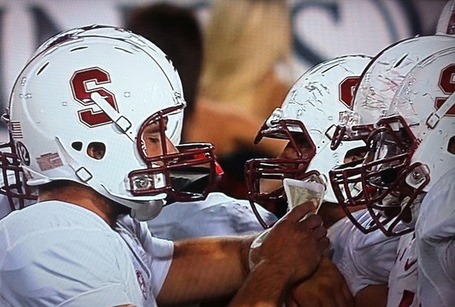 The Stanford linemen got a lot of scars on their helmets at Arizona's expense, but

The usual suspects at the top of the conference all posted solid wins, as Oregon, USC, and Stanford left no doubt in their wins. But had any of the three even been challenged by late in the game, it would have been major news, given their opposition.

The conference newcomers both posted impressive wins in their respective in-state rivalry games, as Colorado and Utah both over came early deficits to pull away to decisive victories.

The last game of the day was the most important one, the second conference game of the year that counts in the standings, and the only one of the weekend. And Stanford answered the bell against easily the toughest opponent they have faced this season, hammering Arizona into submission 37-10. It took a while, though, as the Wildcats were within 13-10 a minute and a half before halftime, behind a great first half performance by Nick Foles. The ‘Cats qb completed his first 17 passes, and was 18 of 21, for 198 yards, and a touchdown, at the break.

Foles and his wide receivers (including Juron Criner, who had a touchdown catch in his return after missing only 1 game after having an appendectomy) are about the only weapons Arizona has, however, and once the Stanford defense adjusted to them, and the loss of LB Shank Skov to an apparently potentially serious knee injury, the ‘Cats were done. Foles only completed 10 of 18 passes, for 84 more yards, in the second half, and Arizona managed only 51 total rushing yards against the physical Cardinals. 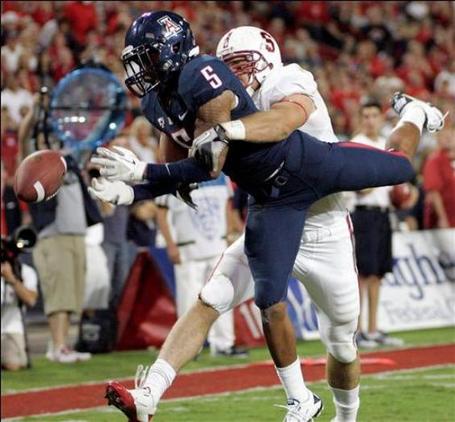 Meanwhile, Andrew Luck adjusted to the loss of TE Coby Fleener to a concussion, and WR Chris Owoso being temporarily knocked out of the game, due to a shoulder bruised on a kickoff return Owoso never should have brought out of the end zone. Luck completed 20 of 31 passes, for 325 yards, and 2 second half touchdowns, which gives him a career total of 53, and pushed him past Jim Plunkett into third place on Stanford's all-time quarterback touchdown list.

Luck also got a big assist from Stepfan Taylor, who romped for 149 yards on 22 carries, including a 49 yarder. In all, the Cardinal bludgeoned the once feared Wildcat Desert Swarm defense for 567 yards, and it could have been worse.

With Auburn's 38-24 loss at Clemson, Stanford now has the longest winning streak in the country, 11 games.

More definitive word on the severity of Skov's injury won't come until Stanford gets home, and doctors get a closer look at his left knee. But there was clearly a lot of pain involved, and Skov is the toughest hombre on the most physical team in the conference.

Stanford gets a bye, and it comes at a good time. Fleener and Owoso should bounce back with the extra time off after the hard hitting Arizona game (there doesn't seem to be any other kind in Tucson, where someone always seems to get hurt). But the Cardinal defense will need to use the time to develop a plan to go forward without their most dominant player.

Arizona could use a break too, having now lost 7 straight to FBS opponents. 5 of those losses have been by more than 2 touchdowns. Unfortunately for the ‘Cats, Oregon is coming to town next week, and then they have to visit USC. The worst could be yet to come.

Oregon spotted FCS Missouri St. a 7-0 lead, but then ran off 56 unanswered points in less than 33 minutes. The Ducks got touchdown runs of 90 and 50 yards from LaMichael James, who rolled up 204 of Oregon's 416 rushing yards, and 3 scores, in just 12 carries. 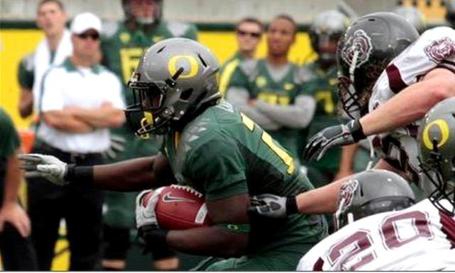 Darron Thomas completed 11 of 15 passes for 3 more touchdowns, and 206 yards, as the Ducks rolled up 681 yards on the over-matched Bears. And the Ducks did this despite Missouri St. keeping the ball away from them for almost 2/3 of the game.

Matt Barkley threw 5 touchdown passes as USC rolled up 501 yards in a 38-17 drubbing of Syracuse, one of two (Not so) Big East teams [along with Pittsburgh] freshly accepted into the ACC Saturday. It was by far the best the Trojans have shown on offense so far this season, while the USC defense, which has been solid all along, held the Orangemen to only 73 yards rushing. 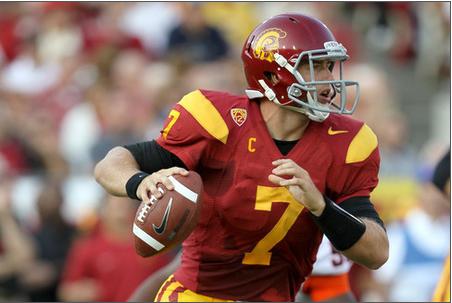 We'll learn a lot more about USC in the next month, as the Trojans, who haven't left the LA Coliseum yet this year, have 3 of their next 4 games on the road, and against teams that have actually won games against actual competition. But a sound defense and an increasingly balanced attack makes the Trojans the clear favorite in the Pac-12 Southern Division at this point, especially with the win in hand they have last week against Utah.

The Utes bounced back from their heartbreaking 23-14 loss to USC to destroy BYU. Utah was dominant, as they ran off 47 unanswered points to come from behind to blow out their rivals 54-10 in Provo in the Holy War. John White IV piled up 174 yards and 3 touchdowns, one a 62 yard romp, and another from 35 yards out, on 22 carries for Utah. It was the Ute's biggest win in the Holy War in 80 years. 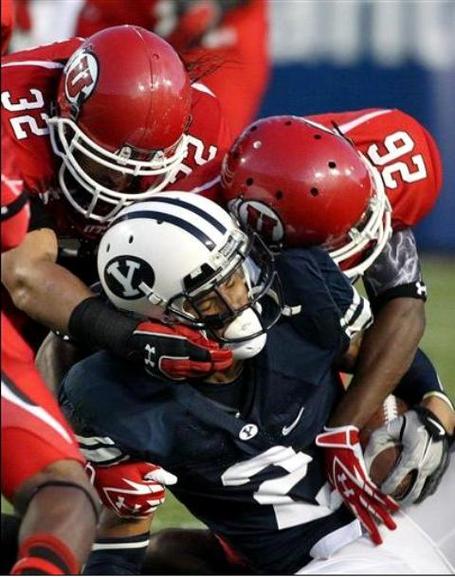 Utah was all over BYU in the Holy War.

6 Cougar fumbles, three of which led directly to Utah touchdowns, and an interception, contributed to the blowout, and largely eliminated any scouting value the game might have had for Oregon St. as they anticipate next month's visit from BYU. The Utes have demonstrated in back to back road games in the most difficult of environments that they too are going to be a force.

Colorado also fell behind Colorado St. early, as the Rams opened a 7-0 lead on the game's first drive, and made it hold up until almost halftime. But the Buffs' Tyler Hansen ran for the first of his two touchdowns on the ground, and threw for the first of his two threw the air 12 seconds before the break, and Colorado led the rest of the way, taking a 28-14 win in the Rocky Mountain Showdown in Denver. 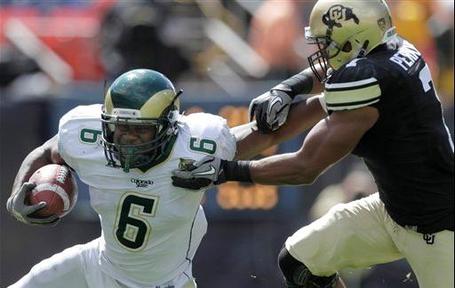 Colorado made things rough for the Rams in the Rock Mountain Showdown.

And the Golden Bears hosed Presbyterian.

The Cougars Couged it in their first road trip of the season, a 42-24 loss in San Diego that saw the Aztecs run off 28 unanswered points to overcome what had been a 10 point Washington St. lead after Marquees Wilson had caught his second touchdown pass of 78 or more yards from Marshall Lobbestael. With the win, San Diego St. is off to their first 3-0 start in 30 years.

Lobbestael did throw for 3 touchdowns, and 368 yards, but he also served up a pair of interceptions, and fumbled as well. San Diego St. held the ball for 11 ½ more minutes than Washington St., and used a balanced attack, with 273 passing yards and 227 yards rushing, 191 by Ronnie Hillman, below, (photo via Cougcenter.com) who scored on 4 of his 32 carries, to roll up 500 total yards on the Coug defense. 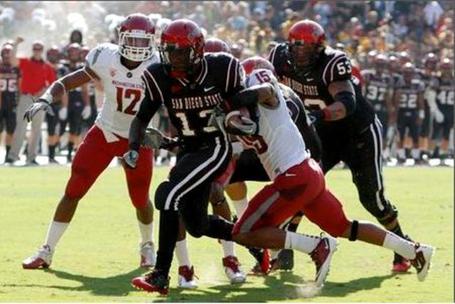 Washington experienced Big 10 officiating, which serves as a reminder that the Pac-12 does not have a corner on the market on unimaginable calls, but it was their continuing defensive challenges that really cost the Huskies the game. The Huskers ground game ground out 309 yards rushing, including 120 and 2 touchdowns by Rex Burkhead, below (photo via cornnation.com),and 83 more, plus another score, by Taylor Martinez, as Nebraska opened a 44-17 lead before claiming the rubber game of the 3 games series conducted by the teams over the last year 51-38. 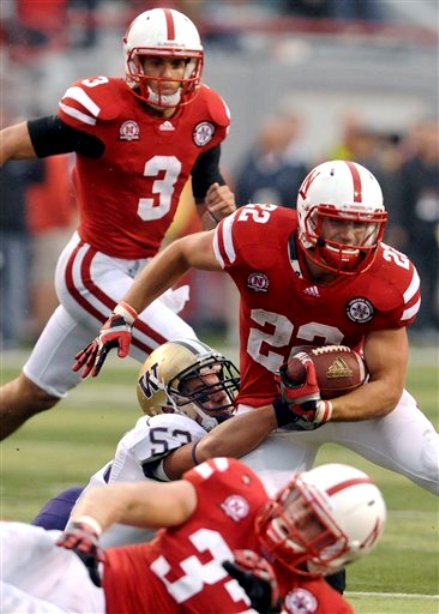 Chris Polk pounded out 130 yards and a touchdown on the ground himself, and Keith Price threw for 274 yards and 4 scores, though he also served up a pair of interceptions. James Johnson caught 6 of those passes, for 108 yards and 2 touchdowns, including a 52 yarder for one of the scores. And Kevin Smith had 111 yards, including a 64 yarder, on kickoff returns.

The Washington defense that had given up over 800 yards passing in their first two wins wasn't taxed in the air by Martinez, but got flat run over by the big red machine.

Arizona St. went into Champaign ranked #22 in the nation. But after allowing the Illini to sack quarterback Brock Osweiler 6 times, they left having lost 17-14, and having lost that ranking. 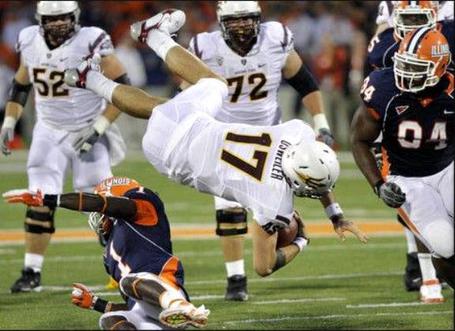 Osweiler accounted for both Arizona St. scores, throwing for one and running for the other, but also threw a pair of interceptions, and lost the fumble that led to Illinois' game winning touchdown in the fourth quarter. 8 penalties compounded the Sun Devils' struggles in their first venture out of Tempe this season as well. Arizona St. has now lost 11 of 14 games in the last 3 seasons they have been in that were decided by a touchdown or less.

And the Golden Bears hosed Presbyterian.

Having defeated San Jose St. by 10 points behind an performance by Richard Brehaut that was unspectacular, but one in which Brehaut did not turn the ball over, UCLA switched back to Kevin Prince, the Bruins oft-injured contribution to the health care crisis in America, who had missed the game. 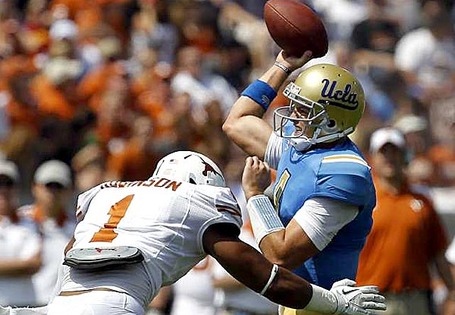 UCLA quarterback was pressured into throwing 3 interceptions in his first 7 throws against Texas.

Prince threw 3 interceptions in his first 7 throws, all of which Texas turned into touchdowns, and any chance of the Bruins reprising last year's 34-12 upset of the Longhorns in Austin was long gone. UCLA never got closer than 2 scores the rest of the day, and #23 Texas cruised to a 49-20 win.

Brehaut returned, but the Bruins were out-passed, out-rushed, out-possessed, out-penaltied, and beat on both 3rd and 4th down. The Longhorns piled up 284 yards and 4 touchdowns on 50 rushes, and also completed 80% of their passes.

The Golden Bears rolled up 581 total yards, and 63 points, while their defense pitched a shutout (the Blue Hosed's points came off a blocked field goal and a pick-6, the only thing Bears qb Zach Maynard did wrong all day), as California hosed Presbyterian 63-12 in their first home game at AT&T park.

The big mean Bears only let Presbyterian play with the ball for 40 plays in less than 20 minutes, and limited them to 48 total yards. The Blue Hosed' offense was about as balanced as Cal's, as Presbyterian ran for 20 yards and threw for 28. The Bears ran 52 times, for 285 yards, including 17 carries by Isi Sofele for 105 yards and 2 touchdowns, and threw 37 times, for another 296 yards. 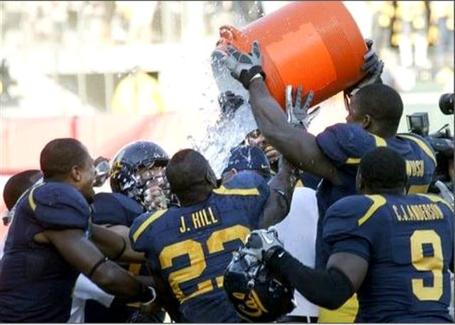 There was no water left in the hose after the Bears got done with Presbyterian, so they had

to dump the cooler on coach Jeff Tefford, who got a school record 75th win as a coach.

Maynard completed 15 of 25, for 3 scores and 215 yards, before Jeff Tedford, who became the winningest coach in Bears history, moved on to get the rest of his quarterbacks some stats as well.