Wide Receivers Go Round And Round, And More On The QB Shuffle

Share All sharing options for: Wide Receivers Go Round And Round, And More On The QB Shuffle

WR Marcus Wheaton returned to practice for Oregon St. today, after a few days rest for the ribs he bruised in the Wisconsin game, but Jordan Bishop, who practiced Tuesday, did not work today, resting his right ankle, sprained against the Badgers.

Also, an impatient James Rodgers inserted himself into drills with the first team today, and went full out.

"I still am not going to be definitive," head coach MIke Riley said of Rodgers, whom Riley admitted could play against UCLA on Sept. 24 if he practices the same way again tomorrow.

"I [still] haven’t had that talk with the doctor, and talked with James," Riley said. "We’ll have something by the first of the week for sure. If he does this again tomorrow, that will be good."

Riley has been rather busy with the radio talk show circuit since announcing that Sean Mannion will be the starting quarterback for the Beavers going forward, but it would seem finally getting around to Rodgers would be a priority.

Speaking of the quarterback controversy, upon listening to some of the day's discussion, it became clear that the degree of surprise over the demotion of Ryan Katz varied considerably.

While those following the situation closely could see the change was a predetermined move as far back as the Sacramento St. game, some of those who didn't see the opener (and there were many, given that the game wasn't televised) were still playing catch up.

Riley's move has been characterized by many as "out of character", and it generally is, as far as the demonstrated loyalty to veteran players in the program Riley generally has shown.

Mike Parker, voice of the Beavers, did remind listeners to the Joe Beaver show on KEJO radio that Jonathan Smith also ascended to the starting role after being the second guy in a quarterback rotation with Terrance Bryant back in 1998. Which happens to date to about the same time Oregon St. was last mired in as lengthy of a losing streak.

That was before a considerable number of current Beaver fans came back to, or climbed on board, the program.

Parker also noted that Bryant would get another chance in relief of Smith, leading a major rally against USC, which came up a score short when the clock ran out with the Beavers driving. The point was made in response to speculation by callers to the show about whether Katz's days might be numbered in Corvallis, and whether he might transfer.

Katz, by the way, has indicated that he does not have any such plans, at least at this point. It has been only one day, though.

Realistically, Oregon St. could well have to call on Katz again. Last year, 11 of the 12 teams in the Pac had to make an unplanned quarterback change under duress at some point, and its already happened to Washington St. and UCLA this year. Especially given that Mannion is not very mobile, and not very experienced, the odds are not in favor of his taking all the snaps the rest of the way.

The greater part of the discussion continued today to revolve around the surprise factor in Riley's decision, even over the bizarre nature of the play calling and quarterback substitution patter employed Saturday in Madison. Largely due to the off-season message emanating from the program about Katz being the team's glue, and moves like putting Katz on the ticket for opening day, and prominently in the media guide, most thought Katz, who had a pretty good first year, would be the guy, and without question. (Or was Riley foreshadowing by putting Katz on the BACK cover?)

To be fair, Riley did start dropping hints from about mid-camp onward about Mannion's progressing. When Cody Vaz, who was the #2 all last season, and took the lead in Katz's absence during spring ball, missed a week of fall camp, Mannion got all the work as the #2. And then there was the hot Saturday in late August when Katz rested his arm, a part of Riley's "pitch count" for the preseason designed to not wear out the starter, when Mannion took all the snaps with both the #1s and #2s. 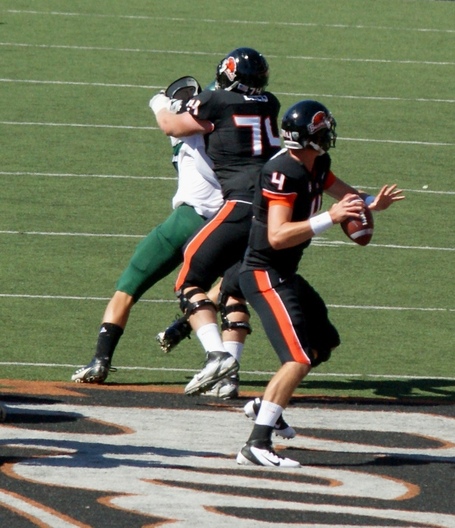 starter at quarterback in the second half of the Sacramento St. game.

In hindsight, that was the sign of things to come. Various writers covering the Beavers on a daily basis heard Riley's comments that week, and made mention to varying degrees of Mannion's work, and Riley's remarks. But no one anticipated the shakeup to come, and when the depth chart for the Sacramento St. game came out, Mannion was still listed third, behind both Katz and Vaz. (If you think Katz might be feeling disappointment and considering his options, imagine where Vaz's mind must be by now.)

Some have suggested some possibilities that Jon Warren summed up on today's Joe Beaver show as the possibility that maybe Mannion is just so good that the coaches feel they have to go with him. And Riley has said repeatedly that the change is not about anything Katz has done wrong, or can't do.

And that could be a reasonable hypothesis, at least to those who didn't have the opportunity to witness much if any of the Beavers' off-season and preseason workouts. But not to those who were there for a substantial number of them.

While no one saw as much practice and tape as Riley, the reason no one, Buildingthedam.com included, reported that based on RIley's comments at the time, the move to Mannion was imminent was that there was no apparent reason to believe that was the case.

I'll admit that when I heard Riley's glowing assessment after seeing the same scrimmage that led to those comments, I thought of it as Riley, who never had a bad word to say about anyone, trying to keep his red shirt freshman student's spirits up.

None of this is meant to declare that Mannion won't or can't succeed, and no one hopes for that outcome. Nor is the questioning of several of Riley's decisions (and he also clarified that it was he who went to offensive coordinator and quarterback coach Danny Langsdorf with the idea to elevate Mannion) intended to indicate any hope that things won't work out. Because if either Mannion or Riley do fail, it means the Beavers will fail.

The prospect of replacing Riley, who has been the best coach in the business to work with, as far as being open and honest, could lead to even less success, and more headaches in any event. No one wants to have the Pirate Mike Leach conversation.

But Riley sees something different than everyone else, including some of us with decades of looking at Pac-solve for x quarterbacks, has seen looking at the same thing. Hence the concern.

Until Oregon St. takes the field against the Bruins, we won't learn anything more about the quarterback situation. And even if Mannion lights up UCLA for a spectacular runaway win, we won't learn all that much until after the trip to Tempe the following week, and then a visit from those 'Cats from Tucson the week after, are completed, and there is enough evidence to see if any success can be sustained, much less built upon.

It does make the week's downward trend in secondary market prices for tickets for the games against UCLA and Arizona St., both teams with plenty of intrigue swirling about them as well, mystifying, however. Surely there are plenty of Oregon St. and Pac-12 fans that are going to be interested in how it all plays out, one way or the other.