Share All sharing options for: Pac-12 Week 2 A Wild One

If week 1 in the Pac-12 didn't hold college football fans attention too well, week 2 certainly did, and this on a weekend when nationally there were a number of other spectacular games.

#13 Oregon (1-1) got back into video game mode at Nevada's expense, rolling up a 69-20 win. Darron Thomas completed only 13 of 19 passes, but they went for 295 yards, and 6 of them were good for touchdowns, tieing a school record. 4 were in the second quarter, when the Ducks blew their first game of the season in Autzen stadium wide open.

La Michael James caught a touchdown pass, ran for another score, and after Oregon suffered uncharacteristic issues with their kick returns early in the year, took a turn on the punt return squad, and took one to the end zone. Oregon also got a pair of pick 6 interceptions from their defense.

The Wolfpack lost a lot more than just Colin Kappernick off last year's team, but there are still some remnants of a team that won 13 games, and the Ducks flat out drilled them.

Recent events have shown that there are a few teams that can give Oregon more than they can handle, but it is a very few teams. The Ducks are still ahead of the vast majority of teams.

#6 Stanford (2-0) put on a scoring show as well, as Andrew Luck fired 4 touchdown passes to his receivers, and one to a Duke defender, in the Cardinal's 44-14 road win over Duke. 10 different Cardinal receivers had a catch. Meanwhile, Stanford ran for 205 yards, while their defense was allowing Duke only 30 on the ground. 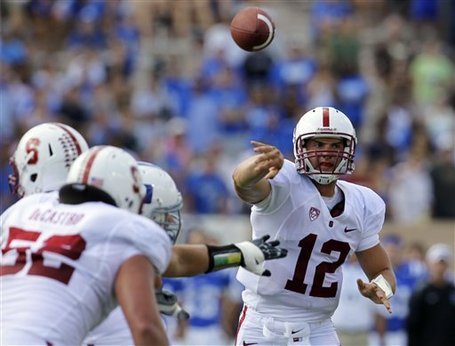 For the second week in a row, Luck, above (AP Photo) and the Cardinal had a couple of glitches, but really could have won by as much as they wanted. However, with a struggling teams in Arizona, UCLA, and Colorado up next, it could be quite a while before we get a true read on just how good Stanford is. 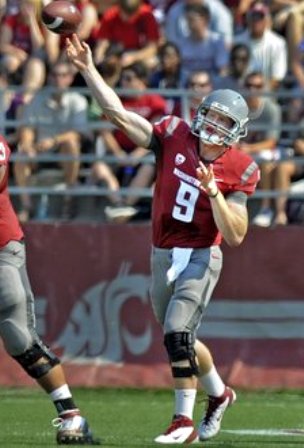 Washington St. (2-0) burned out some lights in their scoreboard as well, as Marshall Lobbestael, above (Spokane Spokesman-Review Photo) filled in nicely for the injured Jeff Tuel. Lobbestal completed 24 of 32 passes for 361 yards and 5 touchdowns to lead the Cougars to a 59-7 romp over UNLV. Connor Halliday came on in the 4th quarter and completed 5 of 6 passes for another 110 yards and 2 touchdowns. In all, the Cougars threw for 471 yards, and rolled up 610 yards on the Rebels.

Whether the Cougars can sustain the momentum they have generated in their two season opening blowouts should they encounter some actual opposition remains to be seen, just as the untelevised Cougars have been largely unseen, but so far, so good.

These wins were great compliments to Arizona St.'s 37-30 overtime win Friday night over #21 Missouri in Tempe. Brock Osweiler ran for the touchdown that gave the Sun Devils (2-0) a 2 touchdown lead early in the fourth quarter, but the Tigers' James Franklin threw a pair of scoring strikes to force overtime. Undaunted, Osweiler completed his third touchdown pass of the night, and the Arizona St. defense closed out the win.

Penalties and mistakes continue to hinder Arizona St., but Osweiler has demonstrated that he's up to the job of being a Pac-12 quarterback.

The Sun Devil's win was quite a contrast to another rough night for their rivals down the road. Despite having Nick Foles complete 37 passes (out of 51 attempts) for 398 yards, the Wildcats (1-1) suffered their 6th consecutive loss to FBS opponents. #9 Oklahoma St.'s Brandon Weeden completed 42 of 53 passes, for 397 yards and a pair of touchdowns, and Joseph Randall ran for 121 yards and another pair of scores, as the Cowboys routed Arizona 37-14 Thursday night in Stillwater in a rematch of last year's Alamo Bowl.

Arizona can't run the ball, or play defense, which means Foles essentially has no help. 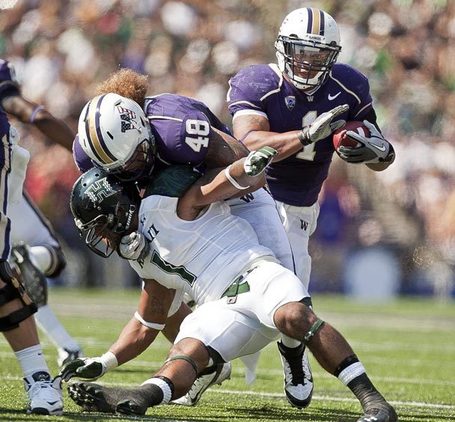 Washington's offense continued to roll, as the Huskies out-scored Hawaii 40-32. Keith Price threw for 315 yards and 4 touchdowns, and Chris Polk, above (Seattle Times photo by Dean Rutz) rambled for 107 yards and another score, and the Huskies, who unveiled special helmets to commerate 9/11, jumped out to a 21 point first quarter lead. They needed it all though, as the Rainbows' Bryant Moniz threw for 333 yards, and rallied Hawaii within one score. But an onside kick rolled about a inch short of the ten yards required for the Rainbow to be able to recover it, and Washington (2-0) held on for the win.

The Huskies still have some work to do defensively, but it looks like it will take a lot of points to hang with Washington this season.

California (2-0) found Colorado (0-2) a lot tougher than they were last year in a non-conference conference game, but the Golden Bears pulled out a 36-33 overtime win over the Buffs in Boulder.

Tyler Hansen completed 28 of 49 passes for 474 yards and 3 touchdowns, as Colorado rolled up 582 yards on the supposedly sturdy Bear defense. But 4 Buff drives ended in Will Oliver field goals instead of touchdowns, and that opened the door for Cal's Zach Maynard. Maynard, making his second start at quarterback for the Bears, again didn't complete a good percentage of his throws, but did throw for 4 touchdowns, including the game winner to Keenan Allen, below (Getty Images Photo) in overtime. 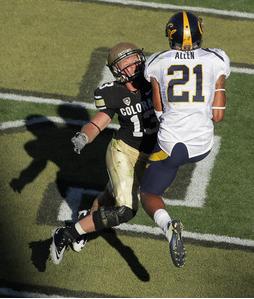 The Bears' defense hasn't been as good as advertised, though last week's win does look better in light of Fresno St. being within 2 points of Nebraska, Washington's next opponent, in the 4th. quarter, before the Cornhuskers pulled away. Maynard's accuracy hasn't been that good, but he does produce points.

The Buffs have got to find a way to hold opponents under 30 points if they hope to win many games. They are getting into firefights with a team better suited to play lower scoring games.

The first ever Pac-12 conference game was a low scoring affair, but USC's 23-14 win over Utah was anything but unexciting. Hard hitting defenses kept points at a premium, but it took a blocked kick on the final play of the game for the Trojans to keep the Utes from forcing overtime. A touchdown on the ensuing runback wasn't even credited until hours after the game.

Matt Barkley and Jordan Wynn had a pretty even duel, with Barkley completing 20 of 32 passes for 263 yards for the Trojans (2-0, 1-0), while Wynn connected on 23 of 46 passes, for 238 yards for the Utes (1-1, 0-1). Both had 1 touchdown toss. The difference was rushing, as Marc Tyler pounded out 113 yards and a touchdown on the ground for the Trojans, while John White missed a pair of series getting an IV, and though he also had a rushing touchdown, White only managed 57 yards, and USC held a 70 yard rushing advantage.

Robert Woods had another big night for USC, though not nearly as good as his first half last wekk against Minnesota, with 102 yards on 8 catches, and also 31 yards on kick returns. But Utah's DeVonte Christopher, below, catching a ball in front of USC's TJ McDonald (AP Photo by Mark Terrill), had the better night, catching 11 passes for 136 yards and a touchdown. 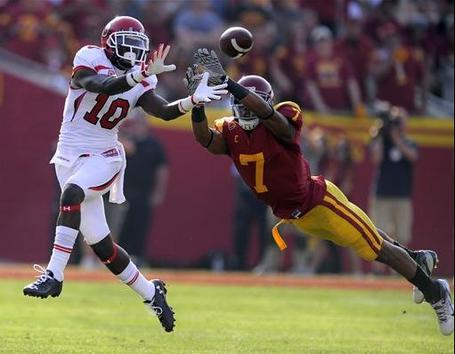 It was the second narrow home win for USC, both of which preserved with a big defensive play in the waning seconds. Barkley and company are going to have to step it up in the weeks to come, but the Trojan defense has been better than expected in the early going.

Utah proved they can play at the Pac-12 level, but the Utes also found out just how intense and hard hitting conference play is going to be, and that it only takes a couple of mistakes to lose a game at this level.

Oregon St. (0-2) made a lot of mistakes in their 35-0 loss to #8 Wisconsin. The Beavers' rushing game and run defense, solid in their loss to Sacramento St., fell apart against the Badgers. Without Malcolm Agnew, Oregon St. ran for only 21 yards. Meanwhile, though it took almost half the game for Wisconsin to get their running game going, Montee Ball ran for 118 yards and 2 touchdowns, and the Badgers rolled up 208 yards on the ground.

The Beavers' Sean Manion actually out threw the Badgers' Russell Wilson as far as total yardage goes, 244 yards to 189, but three of Wilson's passes went for touchdowns.

The Beavers have 2 weeks to get ready for UCLA, who improved to 1-1 on the season with a 27-17 win over San Jose St. in the last game of the night. Oregon St. will have to get healthy by then, but they will also need an actual effective offensive game plan in order to be competitive. The Beavers pass defense will have to improve as well, having given up 7 touchdowns already.

UCLA was able to run very well against the Spartans, as Derrick Coleman rolled up a game high 135 yards and a score, and Johnathan Franklin added 80 more, plus another score. Over 220 of the Bruins 268 rushing yards came in the second half.

Richard Brehaut threw for 140 yards and a touchdown, but UCLA will go as far as their running game will carry them.

The Bruin pass defense, lit up in their opener by Houston's Case Keenam, showed either improvement, or ineptness on San Jose St.'s part, giving up only 116 yards. But their rush defense was suspect, allowing 202 yards, and both of the Spartan's scores.