Share All sharing options for: Rodgers "Kills 'Em" In Drills 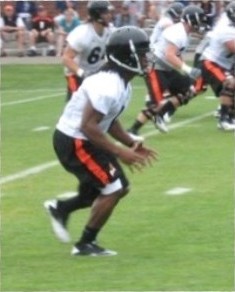 The weather cleared up on day two of Oregon St.'s fall football practice earlier than on opening day, and WR James Rodgers, right, turned up the throttle. The Beavers' leading offensive threat easily out-performed the competition in the cone drill, and looked faster in single passing routes than he had Monday.

Reserve receiver Kevin Cummings continued to make a case for some playing time this fall as well, with a couple of spectacular catches for the second day in a row.

No real contact has happened yet (the shoulder pads won't even go on until tomorrow), and head coach Mike Riley is clearly pleased with the overall work of the receiver group, even those well down on the depth chart, but its already apparent that Rodgers is not only ahead of schedule with his rehab, he's ahead of the rest of the group period.

"You know, I think he followed up a good day with another good day," Riley said. "He was awesome."

Riley also reiterated that Rodgers will begin wearing a custom brace as soon as it arrives, in order to get used to it.

Rodgers did switch from running mode to look and listen, and help coach the less experienced players, early in what was an even shorter practice for the starters than on opening day. But there was already nothing left to accomplish, given the day's practice plan.

Rodgers' performance almost seemed to be a quiet rebuttal to the Portland media, which seems to be united in calling for Rodgers to be held out until at least the UCLA game. Both papers' primary writers have said so, and on the Morning Sports Report on 750 the Game, host Chad Doing even went so far as to say Riley is crazy to let Rogers on the field without a knee brace, and would be equally off-balance were he to even consider using Rodgers in a kick return role.

Riley of course is being cautious after the two major surgeries it took to repair the damage Rodgers suffered just before halftime in last year's Arizona win. But sooner than later, it will be decision time, and unless there is a major setback once full action drills start that there currently is no reason apparent to expect, the question will be whether Riley plays his best players or not.

The same question will apply to H-Back Joe Halahuni, who also continues to show no signs of lingering affects from his shoulder surgery. We won't know more about Halahuni until he takes his first hit, which Riley has said won't be until week after next. There appears to be no reason to not find out then, though.

After a predictable day of sore muscles Monday, the second day of practice didn't produce any new injuries, and RB Malcolm Agnew returned to a full afternoon of action, showing no ill affects on the ankle he twisted in the first practice.

Terron Ward continues to look like the best of the new crop of backs, though Riley did note that Malcolm Marable does look a lot stronger than he was in the spring. Senior Ryan McCants continues to get the work as the #1, while Jordan Jenkins probably won't see contact until the third week of camp either. Riley did observe that Jenkins appears to be in great shape otherwise, so it will be interesting to see how things change by the end of week three.

The defensive secondary appears to be more coordinated as a group than has been the case in the recent past, an indication that the combining of the corners and the safeties under assistant coach Keith Heyward is already paying dividends.

After two days of helmets only, Oregon St. will work with shoulder pads on the next two afternoons, both days starting at 2 PM, and there will be some ramping up of the contact that has already been creeping into the line play, and every once in a while a linebacker can be seen unable to resist blowing up someone who dares to come across the middle, pads or no pads. But the really interesting session will come Saturday morning at 8:30, when the Beavers break out the full gear for the first time.