Share All sharing options for: Oregon St. Starts Fall Practice With Lots Looking On For Answers

While the skys were slow to clear on a day that felt more like early October than early August, it was quickly clear that coach Mike Riley isn't alone in looking for answers to a myriad of questions about his Beavers as Oregon St. began official preparations for the 2011 football season.

An unprecedented amount of media, including some long-time area scribes rarely seen around Oregon St., were on hand Monday. That's especially notable, considering it was also Media Day down the road for the two-time Pac-then-10 Champion Oregon Ducks, and "first brother-in-law" Craig Robinson received a visit from his sister Michelle Obama, who is in town with her mother and kids for a visit, today, both events that attracted considerable media attention as well.

Unlike around the Valley Football Center, where all day everyday is media all-access day, down at the Moshofsky Center, not just the message, but access to it, is very closely controlled, so access to practice, players, and even answers to questions for coaches made today a priority for the media. And the first lady being in town is good for some filler, and some traffic snarls.

But despite those events, there were plenty of eyes on the first day of fall camp, eager for clues about answers to what Riley has termed an unprecedented number of questions at the start of the season.

Several of the leading questions are about the health of the receiver group, and onlookers were quick to note that both wide receiver James Rodgers and H-back Joe Halahuni were running routes and catching balls with the first string right away. And Rodgers was without a knee brace, surprising many.

Riley explained "James' brace is coming," but stressed "it's for protection from over-extension in the event of contact. We cleared all that with the doctors, and so long as no contact is involved, its fine."

Rodgers, who was named today to the Paul Hornung Award (for college football's most versatile player) watch list, rotated out of some of the drills before some of the first and second stringers, to avoid over-doing it on the first day, and said after practice that there was no pain.

"James looked good today, ran well, made cuts," Riley said. "It looked like James Rodgers with the wrong number to me," referring to the fact that he will wear #1 this season, rather than the #8 he has previously worn at Oregon St.

One of the more telling things at practice comes after a couple of hours. Riley releases most of the first and second string players, who have had most of the work, and a lot of them headed for the ice tanks to soak sore muscles, while quarterback Ryan Katz, fresh off an exchange of trash talk with defensive lineman Kevin Frahm, talked to more media members than he probably realized existed. 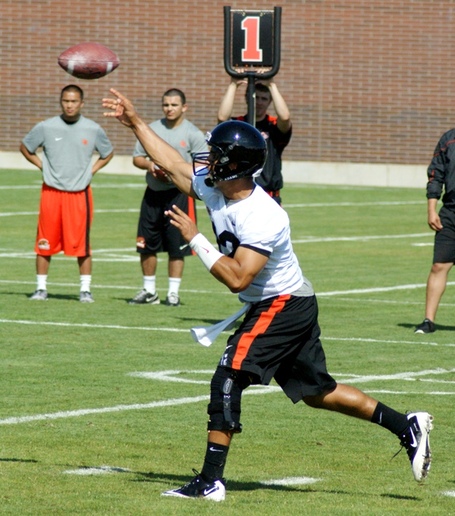 Ryan Katz was sharp with his passes and his tongue in Oregon St.'s opening practice.

But the work isn't done, and Riley and staff continue working with the rest of the squad, mostly players you need to consult the roster and depth chart to even figure out who your watching. Notably, Rodgers and Marcus Wheaton remained, as usual, with their eyes and ears open. Those who wonder why all-conference players would still be there working with the fifth string guys could get one of those clues to answers about why they are all-conference contenders. 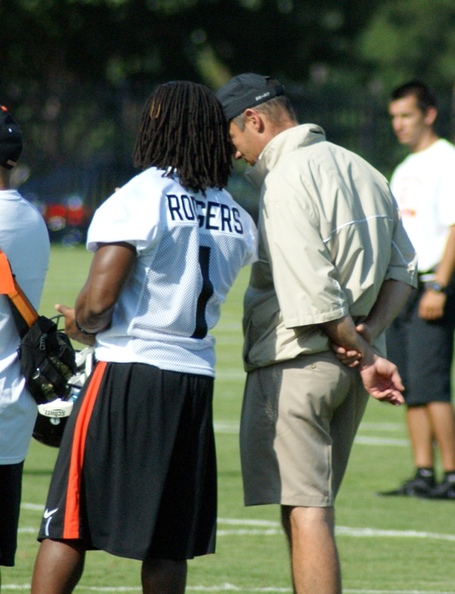 opening practice for the 2011 season.

In contrast to Rodgers, Jordan Bishop, recovering from a broken bone in his ankle suffered in a pick-up basketball game in January "Looked a little rusty" to Riley.

"Jordan looks like he's a little bit behind at this time, but he did run the routes and catch the balls," Riley said. "You can tell he hasn't had a ton of work lately."

Obum Gwachum also exhibited effects of cramping up in the course of the workout.

Speculation continues that neither Rodgers nor Halahuni may see the field until after the bye week, but their early involvement with route running does portend good things to come.

Riley did note that "Joe Halahuni looks great, but again there's some biology to this. It's going to heal only so fast. Joe is a good healer, but we have to keep him out for a while. Right now it's a couple weeks before contact."

If Rodgers and Halahuni continue to work as they did today, and Halahuni has two full weeks with contact, it will be interesting to see how Riley reins back two of his most enthusiastic, as well as best, players.

Another player still held out of contact is running back Jordan Jenkins, whose' not been cleared for contact yet after shoulder surgery following spring ball.

Oregon St. won't be in full gear until Friday, and so the early practices are no-contact anyway, perfect for getting Rodgers, Halahuni, Jenkins, and others some work. 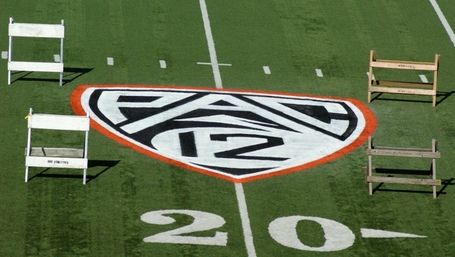 The paint isn't even dry yet on the new Pac-12 logo in Reser Stadium, but the

Beavers are already looking for a replacement at running back for Jacquizz Rodgers.

The running back spot is another of those questions, and Malcolm Agnew tweaking his left ankle wasn't what anyone was hoping for. It doesn't appear to be a serious issue though, as though Agnew was carrying his shoe for a while, he did return to the final sessions.

Some clues, and some clarity, came from the special teams session.

Rashad Reynolds spent much of the time working on punt returns, as Riley searches for an alternative that will allow him to avoid using not only Rodgers, but starting corner Jordan Poyer, off of at least some special teams duty. Whether it's a good idea to remove two of the team's best big play-makers from some of the best opportunities to make game changing plays is another question, though.

It looks more and more like Kevin "Feti" Unga may solidify the starting middle linebacker job though, based on his inactivity with the special teams.

Unga, a key player on these units his whole career, noted he had been "Kicked off special teams, because I'm a #1."

On defense, defensive tackle Dominic Glover practiced, but as Riley noted, "His situation is ongoing. We won't know his final situation until the end of this week or maybe early next week," when the second session of summer term is completed, and Glover gets his grades.

Glover can practice for now, but can't play, and would have to stop practicing, if his grades aren't in order, but can regain it all with some passing marks.

One player who didn't participate was another projected starting defensive tackle, Castro Masaniai, who has a court date Thursday, in connection with the incident in May with his girlfriend, after which Masaniai landed in jail briefly.

"The decision about Masaniai is still up in the air,'' Riley said, noting "What happens in court is obviously a major factor in this.''

Finally, backup linebacker Charlie Gilmour was at practice, but will be out of action indefinitely, with his right foot in a boot, and Colin Lyons, formerly an offensive lineman, until suffering a freak head injury, was on hand in his new role, with the Oregon St. video group.

Opening day concluded with what Riley termed as "A huge rock, paper, scissors competition in the team meeting."

The Beavers will continue to practice daily, starting at 2 PM, the rest of the week, and will have double sessions Saturday and Monday, at 8:30 AM in full gear, and a second session at 6:30. All practices are open to the public.