Oregon St. head coach Mike Riley announced the Beavers will make program history Saturday, when they kick off the 2011 season at 1 PM against Sacramento St., looking for their 9th. straight win in home openers.

True freshman RB Malcolm Agnew was named the starter this morning at the Valley Football Center, joining freshman WR Brandin Cooks, who will get the start in the absence of James Rodgers, in the lineup. It's the first time a true freshman has ever started the first game of the season for Oregon St. at either position.

Here's Agnew and Cooks talking about their opportunities.

A third true freshman, PK Trevor Romaine, will also start. In all, Riley said 10 true freshmen will play significant roles for Oregon St. this season, though OLB DJ Welch, who is one of that group, won't this week. Welch is out short-term with an elbow injury.

With both Jovan Stevenson and Jordan Jenkins, who was cleared for contact starting last Friday, and will play on special teams as well, anticipated to be in the mix at RB, it means Storm Woods will probably red shirt. Riley will preserve Woods initially, though a rash of injuries could change plans later.

Ryan McCants' role at RB remains to be seen, but McCants will see action on special teams in any event.

Riley also announced that he won't administer any of the pending suspensions this week, due to the impact on the rest of the team and program it would have.

With Joe Halahuni out until after the bye in week 3, and Tyler Perry out for about 3 weeks, TE would be down to just Colby Prince without Connor Hamlett, who will have to take a weekend off for the MIP party after the first week of camp. Perry had surgery on Monday to clean up meniscus damage to his knee, similar to the procedure DT Kevin Frahm had.

With Frahm also out at least until next week against Wisconsin, DT Castro Masaniai will start, and also have his weekend off later in the campaign. Riley expects Dominic Glover to start at the other DT spot, based on his expectation that Glover's academic status will be resolved by then.

Riley received several questions at Tuesday's press conference, and has been questioned in the national media, about his decisions about when to administer the outstanding suspensions, but he has maintained that there comes a point when the rest of the team and program could be excessively harmed due to the actions of a few, and doesn't intend to let that happen.

"You just have to think of the rest of the team,'' Riley said.

It's also notable that being suspended for a televised game, against a higher profile opponent, would actually be a more stern penalty than missing a game no one will see on tv.

Riley said he anticipates several starters who have missed multiple practices recently, including S Lance Mitchell, WR Marcus Wheaton, above, and OLB Cameron Collins, will be ready to go Saturday, though there maybe more practice sessions they only watch and walk thru in order to facilitate that. Wheaton is the most questionable of the group, and if he can't go, or can't finish, due to a hip flexor, red-shirt freshman Obum Gwacham will get the start in his first ever game.

"It’s a concern,’’ Riley said about Wheaton's status. "I’d be kidding if I didn’t say that, because any time a receiver has gone all through camp, and then all of a sudden he can’t run, that’s not a good thing.’’

Even if Wheaton doesn't miss the start, Oregon St. will have over a dozen first time starters against Sacramento St.

LG Josh Andrews is also on track to be back by the time the Hornets buzz into Reser for the second time ever. (Riley's first game back at Corvallis in his second stint, in 2003, a 49-10 Beaver win, is the only other meeting between these teams.) 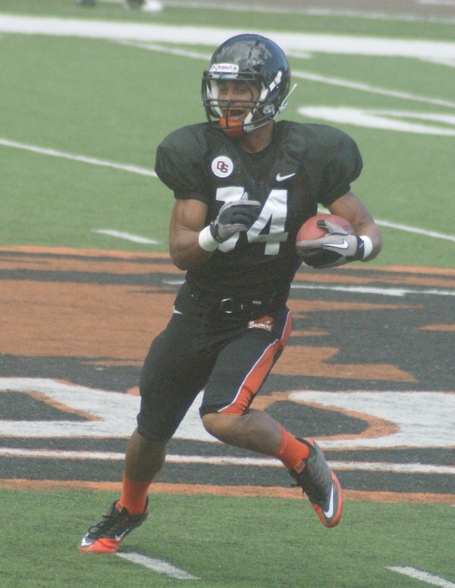 Riley also said CB Jordan Poyer, above, will return punts, with sophomore Rashaad Reynolds, who is also getting the start at RCB in place of Brandon Hardin, filling in for Rodgers on the kickoff return unit. Ward, red-shirt freshman Malcolm Marable, or Poyer will join Reynolds, probably depending on the severity of the situation.

Notably, the absence of Rodgers, Hardin, Frahm, and Halahuni have a combined 65 starts for Oregon St.

Oregon St. is down to about 2,200 tickets left to sell for the non-televised game, only the second game in the last 44 that has no television availability, due to the bad expiring Pac-10(now 12) tv contract, and a weak marketing effort that couldn't come up with even a third tier regional option.

25.036 season tickets have been sold so far, second most in Oregon St. history, behind only to the 26,900 sold last year, which was a Civil War season.