Share All sharing options for: Cooks Coming On Strong

Oregon St. held their second scrimmage of the 2011 pre-season Tuesday afternoon, and while a number of players missed or were held out of the action, freshman Brandin Cooks continued to capitalize on the opportunity to ensure he will not only play as a true freshman, he's likely to be a key contributor for the Beavers.

Cooks showed no ill effects of last week's sprained ankle, and hauled in 4 catches for 90 yards on a hot and humid afternoon that saw some big plays, primarily by the defense, as Coach Mike Riley gathered some more data before he has to make some decisions about who will redshirt, who will play a lot, and who will stand on the sidelines a lot this season.

"I didn't feel the ankle," Cooks said after practice. "It was 'go' time. The adrenalin took me through it."

Riley has been as impressed as the rest of the on-lookers with what Cooks has done.

"This is not overwhelming to him,’’ Riley said about Cooks.  "He’s poised, he’s intelligent, he’s a polished runner. And he 'gets' it.’’

Cooks also had 21 yards rushing on a pair of fly sweeps.

Riley held Marcus Wheaton out of the scrimmage, not for any physical reason, a real concern this fall, but because he wanted to see more about other players.

"We pretty much know what we will get from Wheaton," Riley said in the understatement of the week.

Unfortunately, several members of the defense sat out, but not by design. OLB Cameron Collins had planed to participate, but pain in his surgically repaired abdomen flared up after Monday's practice, and forced Collins back to the sidelines. Back pain put OLB Rueben Robinson right beside him, and DT Dominic Glover also watched, after sustaining a concussion Monday. And WR James Rodgers, TE Joe Halahuni, and RB Jordan Jenkins were all limited to only the pre-scrimmage drills, as Riley continues to be conservative with Rodgers, and Halahuni and Jenkins are still not cleared for full contact. 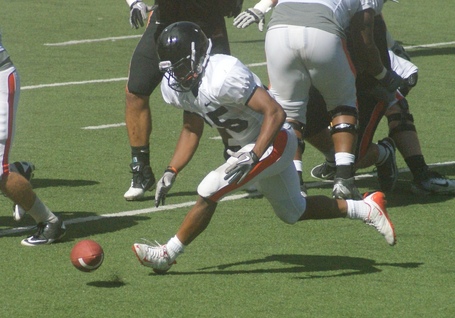 Four fumbles, including the one above by Malcolm Agnew, and a pair of interceptions, both in the end zone, by Ryan Murphy and Lance Mitchell, repeatedly derailed the offense, and Feti Unga showed some speed, scooping up one of the dropped footballs, by Cody Vaz, and taking it the distance, below. 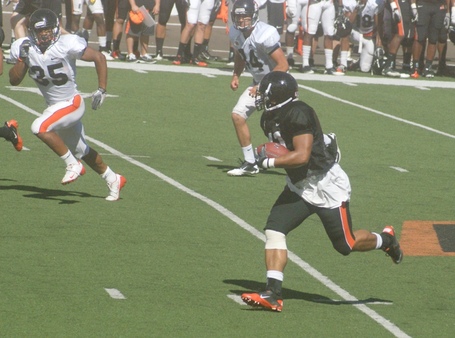 "I loved the big plays,'' Riley said about the defense. "Those interceptions were all athletic looking. Ryan just continues to do that, and that's exciting.'' 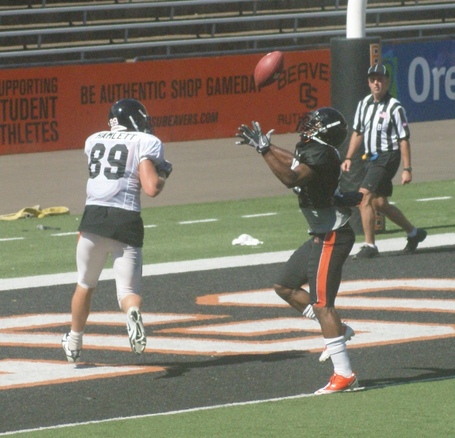 Ryan Murphy picks off a Cody Vaz pass intended for Connor Hamlett that was under thrown.

Freshman RB Agnew ran the plays with the #1 skill player group, with redshirt freshman Terron Ward the apparent #2, while senior Ryan McCants, who had only 2 carries, appears to have dropped to #3 on the depth chart.

When asked if Beaver watchers could read anything into Agnew working with the #1, Riley said "You can, but its not a done deal yet. You can certainly read into it that he's doing real well, and impressed everybody." 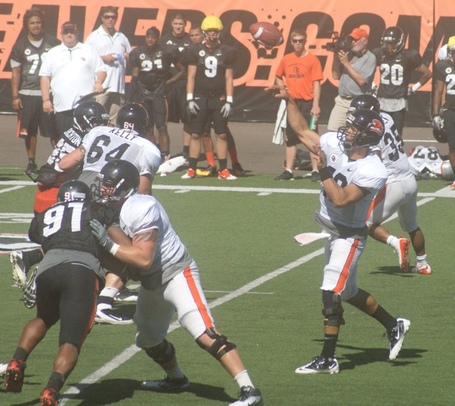 QB Ryan Katz, above, completed 6 of 8 passes in the scrimmage, for 73 yards and a touchdown to Obum Gwacham, below, but threw one of the interceptions. Gwacham's catch over Rashaad Reynolds, who has taken over for Brandon Hardin at CB, demonstrated the problems the massive "Boom" can create. 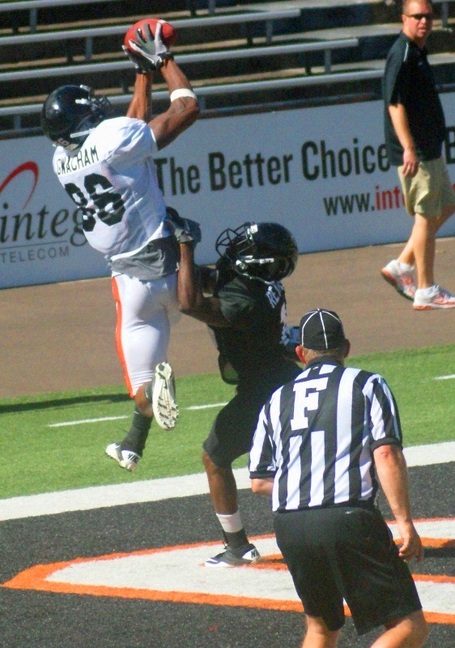 Vaz completed 5 of 12 passes, for 102 yards, including a 59 yard toss to Cooks that wowed the fans. It should be noted, however, that the pass never would have gotten thrown had not an onrushing Beaver defensive lineman not veered off.

Which underscores why its important to not read too much into stats from these scrimmages. Overall, the Oregon St. offense has been able to run the ball rather consistently, if not spectacularly, but the o-line has had persisting problems with the pass rush. No one posted impressive rushing numbers today, but nearly all the runs were obvious situations, where the defense knew what was probably coming.

While many teams have or are about to close practice, Oregon St. continues to effectively hide in plain sight. The numerous injuries have out of necessity mixed up the rotations pretty extensively, but Riley took it a step further. Not only did the #1s usually work against the #3's (so we learned today that the Beaver starters on both sides of the ball can generally beat the third string), the staff also mixed groups within units. The #1 skill players on offense ran some series with the #2 linemen, while the reserves worked behind the starting line. And the starting secondary (minus Jordan Poyer, another starter where the Beaver coaches know what they have) had a variety of personnel groups in front of them.

One piece of good news, especially given that the offense stalled on several occasions, was that freshman kicker Trevor Romaine had easily his best day since stepping onto campus. Max Johnson actually took the first field goal attempt, but missed wide right from 23 yards. Romaine, below, made every attempt, connecting from 39, 34, 43, and again from 34 yards out. 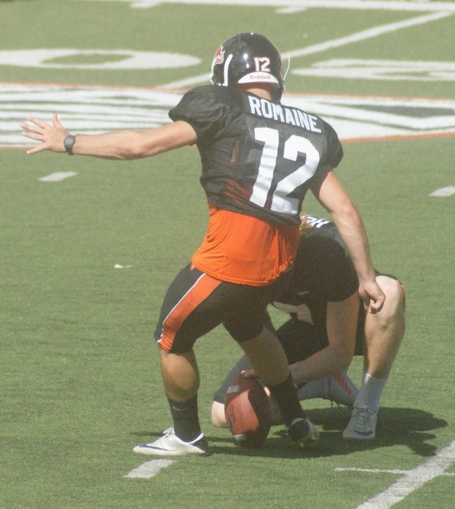 But as with most days, for each piece of good news, there has been some bad. Today, it was freshman TE Kellen Clute, who went down late in the scrimmage with what appeared to be serious right knee injury. Clute had to be helped off the field, leaving a dis-believing Riley to admit he may need to reassign a defensive lineman to the position.

With both Connor Hamlett and Tyler Perry having one game suspensions to serve at some point, and Halahuni probably being unavailable until at least the UCLA game, Riley has some decisions to make.

"I don't know what I'm going to do right now. I've got to do that right," Riley said about deciding on the tight end situation going into the first games. "They certainly deserve to serve their suspensions, but you've got to kind of protect our team too, and spread that out."

It's a dilema coaches face when deciding how to avoid punishing an entire program for the acts of a few.

On the pre-existing injury front, DT Kevin Frahm returned to practice as a spectator after surgery Monday to clean up a torn meniscus in his left knee. Frahm said he will miss 2 weeks of drills, and the season opener against Sacramento St., but intends to play at Wisconsin on Sept. 10. Frahm has family that lives nearby to Madison, as his father, who is one of eight brothers, was born in Athens, WI, and he intends to play in front of them.

Hardin was also at practice, after getting a second opinion on his injured shoulder. Hardin will have surgery Friday, and could be out for anywhere from 6 weeks to the rest of the season.

"The doctors will know more once they actually go into the shoulder,'' Hardin said. "The best timetable is six weeks. The worst, possibly the season. There’s a break, and there could be some other damage, but they won’t know the full extent of it until they actually go in with the scope, and then we’ll find out,'' Hardin explained. "They have all looked at the MRI, and they all have said basically the same thing: You will need surgery, and you will need a screw in it. I obviously want to get it fixed to come back this season, but am also concerned for the future.''

Hardin, who has already used his red shirt season, hopes to be back during the home stand in October, when the Beavers play Arizona on the 8th., or against BYU on the 15th.

Oregon St. has a 9:30 AM practice in full gear tomorrow, followed by a second session, in helmets and shoulder pads only, tomorrow evening at 6:30 PM.