Oregon St. has 2 weeks in the books in their preparations for the 2011 season, halfway to the opener against Sacramento St. on Saturday, Sept. 3 at 1 PM in Reser Stadium. As we set here, with the two hottest days of the year comprising the weekend, it doesn't really feel like it's that close to the start of football.

Given all the injuries that have complicated trying to find answers to one of the longest lists of questions head coach Mike Riley and the Beavers have faced entering a season, Riley probably wishes there was more time left as well.

An intentionally slow and cautious approach to the rehab of not only WR/KR James Rodgers, but also TE Joe Halahuni, OLB Cameron Collins, S Lance Mitchell, and RB Jordan Jenkins, meant Oregon St. fans wouldn't have a lot of those answers yet anyway. Rodgers hasn't been allowed full contact yet, and Halahuni is hoping to get that clearance the first of the week.

That said, the first couple of weeks of camp is about figuring out who will be the key players where that's not a known, a question that doesn't apply to Rodgers or Halahuni, or Collins or Mitchell either, for that matter. The next two weeks are when preparation for the season gradually gives way to preparation for specific games.

But both parts of the camp suffer when there are as large a number of missed sessions as a number of players will experience this summer, especially DT Kevin Frahm, scheduled to have a torn meniscus in his left knee cleaned up tomorrow, and CB/Special Teams player Brandon Hardin, who could be out until October with a chipped bone in his shoulder.

Hardin's injury qualifies as the biggest disappointment of camp so far, edging out Frahm's plight due to the longer duration of his absence. Both are contributing, along with a rash of other issues Beaver Believers are tired of reading about, to the biggest concern early on, which is the establishment of continuity on defense.

Oregon St. has athletes to fill in gaps, and it looks as though Safety Anthony Watkins and LB Reuben Robinson are going to be able to help as much as hoped. Also, the climate of this group is such that the oft discussed element of chemistry isn't a problem either. But the difference between contending for a top finish in the first year of the Pac-12 North and struggling to even get back to a bowl game isn't very large. A revolving door at numerous positions prevents reaching that point where the unit functions as one, rather than a group of individuals.

However, the defense also has the teams's biggest positive surprise as well. Freshman DE Scott Crichton, below, has emerged as the apparent day one starter, and looks like one of those players who could be one of those rare players that starts every game of his career. 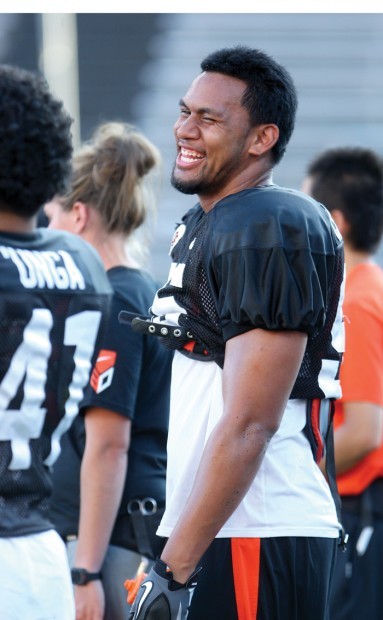 Freshman Scott Crichton has seized the opportunity at DE for Oregon St.

With the number of JC transfers Oregon St. brought in, is seemed a good possibility before camp started that Crichton would be best served by red-shirting. At the very best, most expected him to be an "in the mix" player, one who would only emerge as the second half of the season rolled around.

If Crichton is as impressive over the next month as he has been in the last two weeks, it could be a game changer for the Beavers. 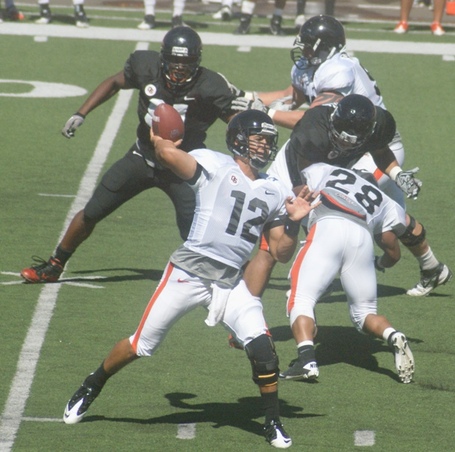 QB Ryan Katz in the single most important piece of the puzzle for Oregon St.

And if Crichton is the best news to come on the defensive side of the ball, WR Marcus Wheaton, below, is the biggest cause for optimism on offense. Junior QB Ryan Katz, above, expected to make great strides in terms of consistency and decision making in his second season, is the most important piece in the puzzle, but Wheaton is a close second. Especially given that he is not only the best receiver the Beavers have exclusive of a healthy Rodgers, but also the player that has had to pick up the slack as the guy who runs the fly sweep in Rodgers' absence. 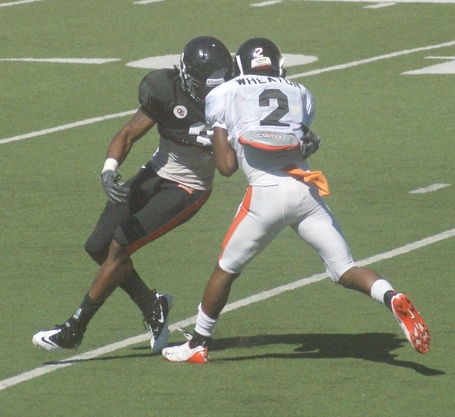 Marcus Wheaton (2) pulls in a pass in front of Safety Anthony Watkins in practice.

But instead of just being that, which wouldn't be bad, Wheaton has improved his overall game. Wheaton's initial strong suit was speed, but he's demonstrated already in fall practice that he has improved his ability to extend his body and arms under control, and make catches of balls that are a stretch to get to. This is and has been WR Jordan Bishop's strength since he was giving high school defensive coordinators head aches while playing for West Salem. But this fall, Wheaton has out-Bishoped Bishop.

And he's stayed healthy, an increasingly important trait as it has become an uncommon one in Corvallis. While the talk about receivers around the Pac-12 has rightly been about Arizona's Juron Criner, USC's Robert Woods, and Washington St.'s Marquess Wilson, Wheaton looks like he could be headed for an all-Pac-12 kind of season as well.

Replacing Jacquizz Rodgers at running back after Rodgers elected to move on to the NFL, and the Atlanta Falcons, instead of returning for his senior season, was the biggest challenge facing Riley and the Beavers through spring ball and fall camp, and this with a reshuffling of the offensive line, the nearly complete rebuilding of the defensive front 7, and the need to replace kicker Justin Kahut (something it was hoped freshman Trevor Romaine would do, but has so far not accomplished) also on the agenda.

The good news is that while senior Ryan McCants, known as the antithesis of ‘Quizz due to his size and bruising running style, is still likely to get the start against the Hornets, it appears that Malcolm Agnew will be the newcomer that gives Oregon St. the balance in their running game that is necessary for Katz and the passing game, clearly the strength of the squad, to succeed. 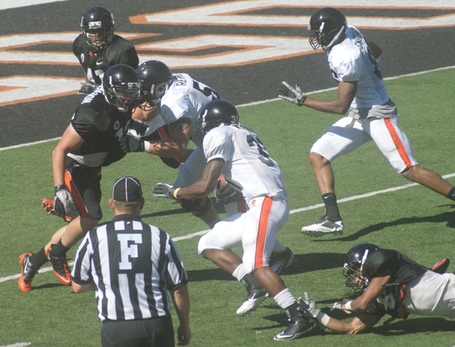 Malcolm Agnew (35) is emerging in Oregon St.'s search for a running back.

Agnew, above, is the son of an 11 year NFL veteran, and looks like you would expect someone of his pedigree to look. He runs hard, but is still fast, mostly keeps his mouth shut, and does his job. And has emerged from the group of a half dozen that was vying two weeks ago for the playing time ‘Quizz vacated.

Three years ago, McCants was also Oregon St.'s starting tailback, the Beavers were also looking at a road game in week 2 to a Big-10 team that was favored to earn a trip to a BCS bowl, and at that time, no one had ever heard of ‘Quizz. And while it's unlikely Agnew will be the rockstar ‘Quizz was a month later, it is likely he will be solidly established in the Beavers' backfield for quite a while to come.

Fortunately for Beaver Believers, the biggest reason to remain patient is that there are still 5 weeks before a lot of those answers absolutely have to have been found, when UCLA comes to town for the Pac-12 opener.

It would be nice if things were coming together in 3 weeks when Oregon St. visits Wisconsin, and though the Beavers had better not take Sacramento St., who are ranked 24th. in the FCS preseason poll, but the reality is a 1-1 start was the most likely outcome when the schedule was first announced, and that hasn't changed.

Even if the Beavers haven't found consistency amongst their remaining healthy players, unless they completely overlook the Hornets, they should get the season opening win over a Big Sky opponent.

By the same token, even if they were completely healthy, and ‘Quizz had stayed around, Oregon St. would be a decided underdog facing a Badger team that is coming off a Rose Bowl appearance, is ranked #10 in the nation in the pre-season USA Today Coaches' Poll, and #11 by the AP writers, is a good bet to advance to the Big-10 Championship Game, and is playing at home, at Camp Randall, one of the toughest venues for visiting teams in the country.

Like most teams in the country, the Beavers could play really well and still lose this one.

While no one is suggesting Riley won't still try to win the breakfast hour game (kickoff is 9 AM PDT), there's little reason to expect Oregon St. will reverse their well-established pattern of poor results in early season road games under Riley's command. Since his arrival in Corvallis, Oregon St. is 1-14 in road games before October, and even that 23-21 win 2 seasons ago over UNLV on a hot, windy night in Las Vegas nearly got away. A pattern that has three times cost the Beavers a bowl game, including last season, and even once a Rose Bowl trip.

Beaver Nation must be prepared to consider this trip to Madison the price to be paid for having Wisconsin come west next year.

With a bye following the Wisconsin trip, watch the next 5 weeks from the perspective of determining whether Riley has found enough more answers to be ready to avenge last year's 17-14 disappointment against the Bruins.