The Beavers ran through their first nearly full contact scrimmage of the 2011 fall camp, with referees, and all aspects of game situations, but without a number of players, who were watching with various injuries.

From amongst the freshmen running backs, it's Malcolm Agnew who appears to be the one emerging, with Terron Ward also getting a lot of work with the "1s". Agnew had 8 carries for 65 yards, including a 25 yard touchdown run off left tackle, and another 18 yard carry.

"For my first scrimmage, I was happy. But I'm never satisfied,'' Agnew told the press after practice. "It was pretty good, but I've still got a lot of stuff to work on.''

"You saw some really good runs by Malcolm today,'' Riley added. "I thought he really stayed on his feet when he was hit. It was impressive.'' 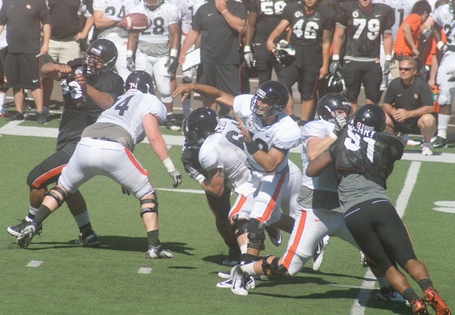 Quarterback Ryan Katz, above throwing in traffic, was moderately sharp, completing 10 of 17 passes for 125 yards, with 5 going to a very sharp Marcus Wheaton, below, catching a pass in front of CB Jordan Poyer, for 80 yards. Katz missed Wheaton deep once though, and also had a couple of passes deflected at the line of scrimmage. 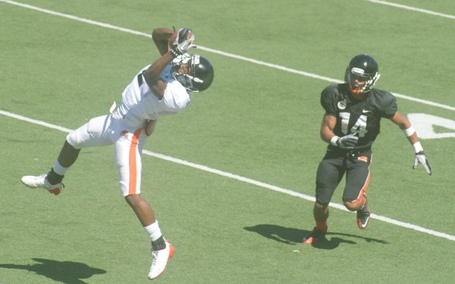 The offense worked without WR James Rodgers, TE Joe Halahuni, and RB Jordan Jenkens, none of whom are cleared for full contact yet in the rehab of their knee (Rodgers) and shoulder (Halahuni and Jenkens) surgeries. Right tackle Michael Phillip also sat out the action with a sore knee.

Third string QB Sean Manion got all the reps with the second string, as Cody Vaz didn't participate for the second day in a row with back spasms.

WR Daryl Catchings was back in action after missing time recently with a knee problem, but could be in danger of dropping a spot on the depth chart, even with freshman Brandon Cooks out for about a week, according to Riley, after spraining his ankle yesterday. Mitch Singler had 5 catches for 95 yards and a touchdown, and looks like he should be working with a higher group on the depth chart.

Cooks, who had been challenging for a spot in the regular rotation before landing awkwardly after catching a deep pass yesterday, doesn't look like he will be out long, as he was walking without any limp. Don't be surprised if he's back in action ahead of schedule, by the first of the week.

The defense was without both DT Kevin Frahm, who strained his knee in a pile up two days ago, and also worked without CB Brandon Hardin, who sat out with a shoulder problem. Frahm finally had his MRI, and indicated it looks like a possibly torn meniscus in his right knee. He said he will get a second opinion, but wants to get it worked on as early as the first of the week if necessary, and intends to be ready by the Wisconsin game in week two. That seems like a stretch if even minor surgery is needed, but Frahm is tougher than the average bear (or beaver), and one should never rule anything out with this guy. Frahm was walking without the crutches he had had.

Speaking of defensive linemen with knee problems, DE Blake Harrah is not officially out of action until after the opener against Sacramento St., with Jeff Bedbury moving up the chart to take his spot.

Despite the injuries, most assessed the defensive performance as not being a "total mess", and there was good pressure at times on quarterbacks. Some running plays were stuffed, while others seemed to find pretty good seams.

Despite all the talk of newcomers on kick returns, it was Jordan Poyer and Jovan Stevenson back for all the kickoffs, and Poyer handled the punts. Don't expect Riley to really take chances with inexperience here. 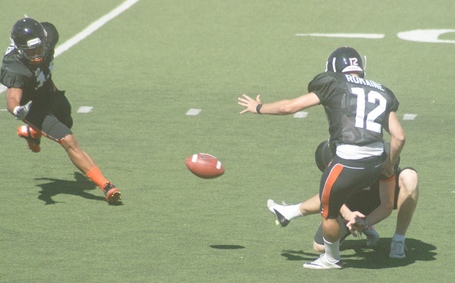 Trevor Romaine has been a concern taking over the place kicking duties for graduated Justin Kahut, and those concerns persisted. Kickoffs weren't as deep as would be helpful, and Romaine also missed a 35 yard field goal wide. He did connect on one from 39 yards, above. Max Johnson made an extra point, and also a field goal from about 34 yards, below. 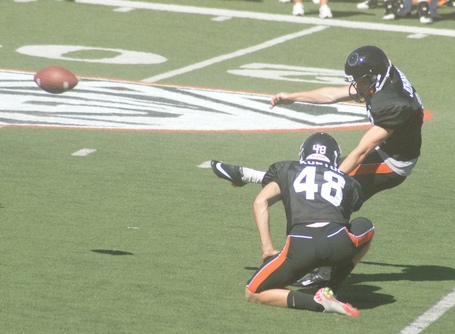 Riley it appears is getting some of the decisions made, such as about Agnew apparently being in the mix at running back. And who is (at least) a "2", vs. the 3

's and 4's seems generally to be shaken out pretty well except where the rash of camp injuries has forced a change, but Riley is still taking a look at a lot of people in some cases, before making his mind up over the next week. He has said he wouldn't make the serious decisions about sorting out the running back situation until after the 10 day mark.

"No need to make any choices right now," Riley commented.

Besides the need to determine how to proceed in the aftermath of Jacquizz Rodgers at running back, there are a couple of scholarship players being pushed hard by walk-ons, and a lot of speed to evaluate on the defensive side of the ball.

The Beavers take the field for a pair of practices tomorrow, at 8:30 AM in full gear, and again at 6:30 in the evening, for a helmets and shoulder pads only session. They have only a single session over the weekend, in full gear at 2 PM Saturday, before taking a day off to heal up some of the bumps and bruises, but hopefully not have a repeat of the hearty partying that punctuated last weekend.