Day 5 Brings Out The Pads

Share All sharing options for: Day 5 Brings Out The Pads

Oregon St. practiced in full pads for the first time in the 2011 camp Friday, as the pace of practice slowly picks up pace.

And the receivers, including Marcus Wheaton, left, continue to appear ready to be the difference makers for the Beavers this season. Quarterback Ryan Katz, who has never been short on velocity, continues to show both accuracy and touch as well in camp.

After the high degree of focus in the morning on the verdict on DT Castro Masaniai, practice was relatively uneventful, though spirited and fast paced.

"That was a fast practice, as far as speed on the field," coach Mike Riley commented. "I was impressed. We certainly aren't ready to play a game, but the effort was good. Now we've got to combine it with the execution."

Masaniai participated in his first practice since separating his shoulder last season, but was limited in what he can do, still needing the NCAA mandated acclimation practices that the rest of the team spent in helmets only, and then with only shoulder pads, earlier in the week.

The larger than usual turnout that was on hand in anticipation of the bar-be-que to follow, and made security personnel strangely over-anxious, were looking forward to seeing James Rodgers work in full gear for the first time, and he did not disappoint. 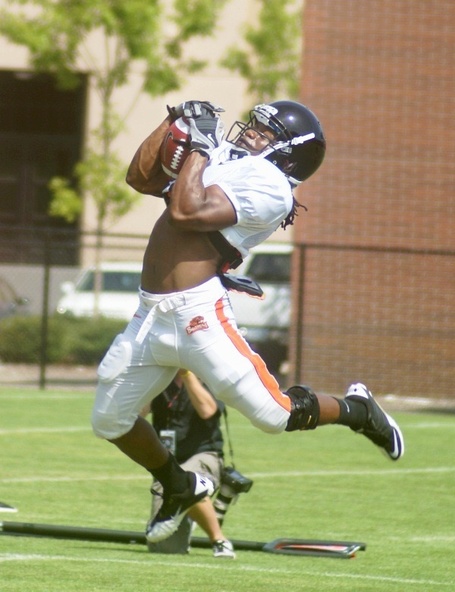 Rodgers, above, continues to do a more limited number of repetitions in most drills than the other receivers, and Riley is having him avoid contact. But he continues to demonstrate that he's ready for each new step along the way. Rodgers' left knee has shown no ill effects from agility and speed work, and today demonstrated that his leaping ability is fine as well. 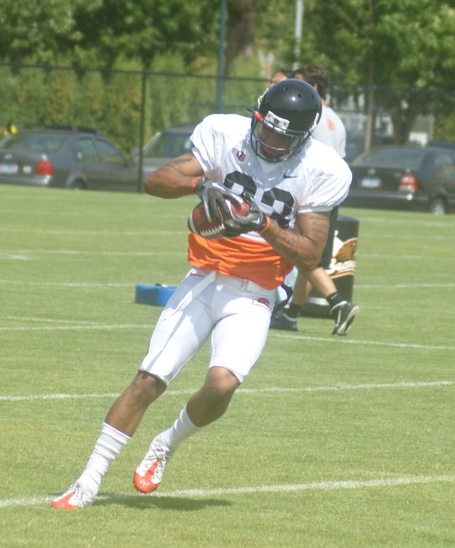 Jordan Bishop, above, continued to round into shape with additional repetitions as well. And TE Joe Halahuni, below, continues to show no lingering effects from his shoulder surgery at the end of spring ball. 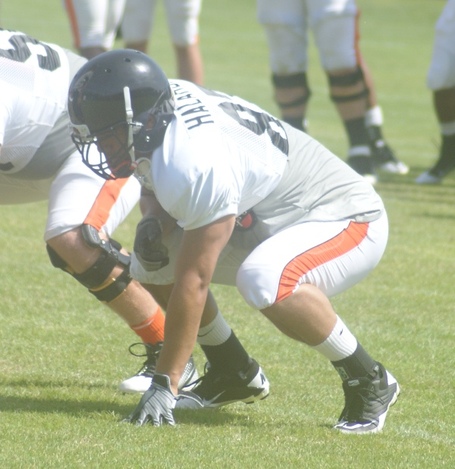 And it isn't just the starters that are making an impression, as true freshman Brandin Cooks and red shirt junior Danny Evans both continue to make impressive plays that might force the Oregon St. coaching staff to find a way to get them some touches in games.

With Halahuni progressing, the tight end group that initially had Riley worried may prove to be one of the best to come along at Oregon St. Freshman Connor Hamlett continues to look like trouble for a secondary to handle, and Colby Prince, below, is showing sure hands in passing drills. 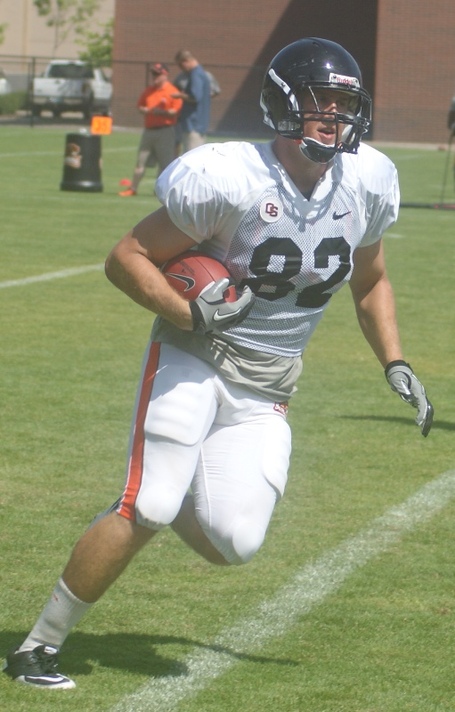 Defensive tackle Michael Doctor, who sat out Thursday's practice with cramps and the affects of dehydration, was back up to speed Friday, but wide receiver Mitch Singler was a spectator for the second consecutive day, after suffering back spasms. CB Ryan Hanford returned to action after missing yesterday due to an eye exam, but CB Brian Watkins took the day off with a sore shoulder.

The Beavers also added another new player besides Masaniai, as walk-on safety Micah Audiss from Roseburg joined the team.

Saturday will be the first day of doubles, with a full-pads practice at 8:30 AM, and a helmet and shoulder pads only session at 6:30 PM.