The Pads (Start to) Go On, And The Hitting Starts

Share All sharing options for: The Pads (Start to) Go On, And The Hitting Starts

Oregon St.'s football players added shoulder pads for the first time Wednesday, and while not operating with a full green light for contact, the hitting began as the Beavers continued to prepare for the 2011 season.

"It was lots of fun to hear the pads pop!" head coach Mike Riley said.

It was also the best look yet at the rebuilt defensive front going against the reshuffled offensive line, and it seemed the front 7 had the better of it, or could have had they not peeled off whenever they got close to either Ryan Katz or Cody Vaz.

Run stopping was another matter, though, as Ryan McCants, Jovan Stevenson and Terron Ward all found seams to cut through on several occasions. The defensive front, quick enough to escape blocks on the pass rush, has some work to do to move larger linemen in order to collapse rushing lanes. None of this was a surprise.

What was a bit disconcerting was the trouble the linebackers and secondary had at times with routes run underneath. That was partially the effectiveness of Katz and the receivers and backs, especially freshman TE Connor Hamlett, who at 6'7" and 260 lbs. is going to be a load to handle for many secondaries.

There will be no quotes to share from defensive coordinator Mark Banker. (He had some, but the would just have to be redacted if printed.)

McCants in particular may have made more quality cuts in one day than in all of some prior seasons, something that he will need to add to his game if he is to hold on to his #1 spot in the running back competition. 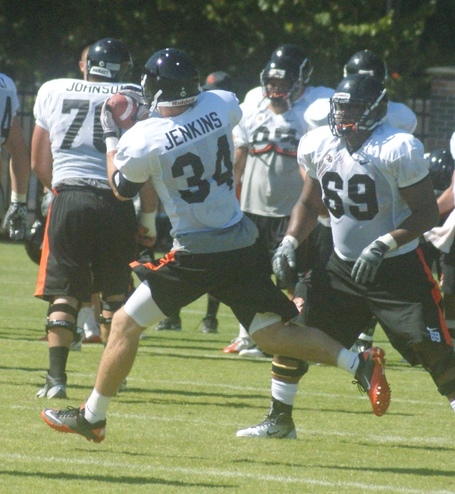 Jordan Jenkins, above, seems to be doing well rehabbing after shoulder surgery. Jenkins had his shoulder pads on, and looked good running pass routes out of the backfield. 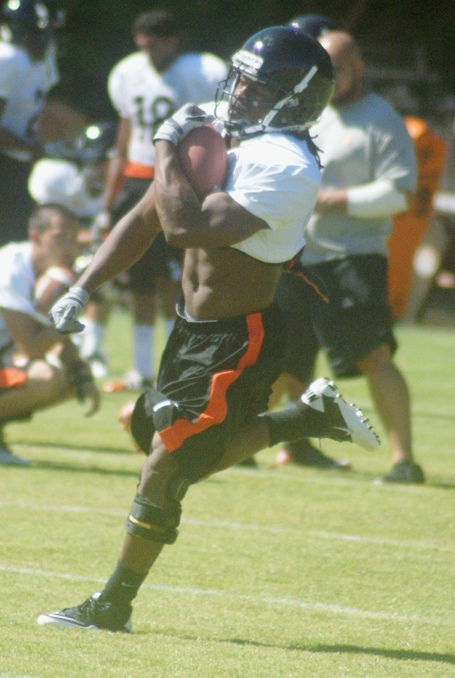 "The brace" made its' first appearance on James Rodgers' knee as well, and seemed to be no hindrance. Rodgers was a spectator when the offense and defense worked against each other with more than hand contact authorized, but ran pass routes, and had the longest route catch of the day. 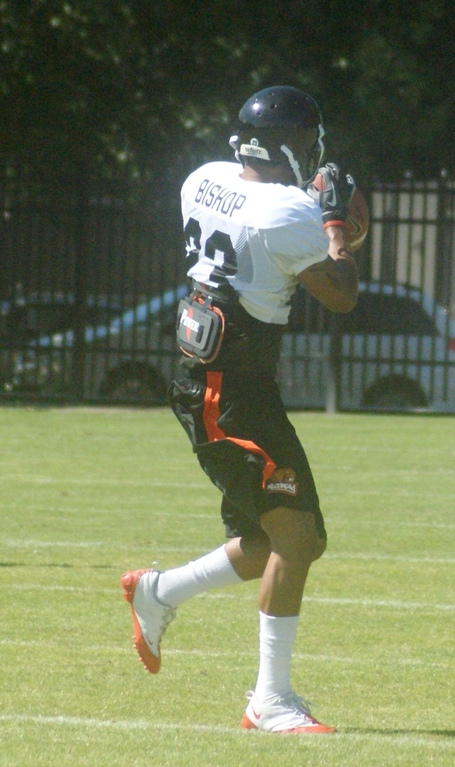 Jordan Bishop, above, seemed to be shaking off some of the rust Riley noted earlier in the week, if ever so slowly. Bishop's hand work was solid, something a couple of other wideouts wished they could say.

Based on a variety of routes ran out of the backfield, it appears that Katz could be throwing to backs more this year than Oregon St. has featured in recent years as well. Ward, below, looks like he could be a good primary option on plays disguised to make it look like a check down. 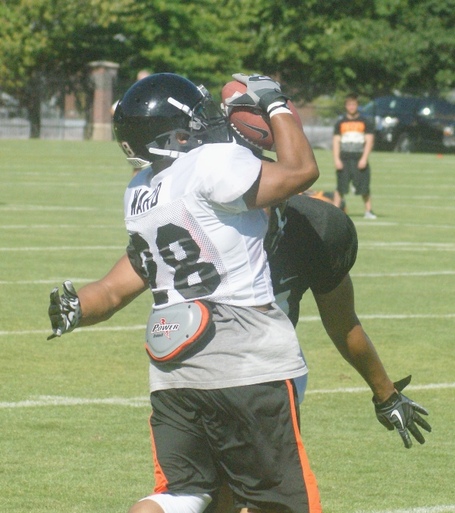 One player who didn't have his shoulder pads on was safety Lance Mitchell, but it was just a planned light day to not over-tax his groin and a tight hamstring, which has been a re-occurring issue.

"We are just being smart about things, not overdoing it," Mitchell confirmed.

A couple of reserves, unfortunately, took their gear off early, and possibly for much of the season, though. Sophomore WR Micah Hatfield, who has already missed one season with a broken leg, suffered a broken bone in his hand, after jamming his thumb catching a pass on a curl route.

"We don’t know if he’s going to have to have surgery, yet," Riley said, "but he has a broken bone in his thumb. He’s out for at least six weeks."

Freshman CB Larry Scott was on crutches Wednesday, with his knee in a brace as well. Scott had limped off the practice field during Tuesday's practice, and has a possibly serious knee injury.

"We won’t have any final word until tomorrow at the earliest," Riley said. "He'll have an MRI for tonight or tomorrow morning, and I’m worried about how bad it might be."

On a lighter note, the day concluded with the annual tennis ball home run derby in Reser Stadium.

"I think we got some tennis balls in the President's Suite," Riley said.

The Beavers will practice in shoulder pads again Thursday, starting at 2 PM, before breaking out the full gear for the first time Friday afternoon. Saturday will be the first doubles day, with a full pad practice at 8:30 AM, and then back to just helmets and shoulder pads at 6:30.

All practices are open to the public.