USC's Prospects Of Meeting Their Challenges

Share All sharing options for: USC's Prospects Of Meeting Their Challenges

Remarkably, USC seems to be becoming the forgotten, or at least the discounted, program in the Pac-12. Quite a change from the recent days of "USC and the Other 9". Pete Carroll's departure and sanctions that include scholarship reductions and two years ineligibility for the post season, which concluded this year, have led many to rightfully attempt to seize on the opportunity, and others to dismiss the challenges facing Heritage Hall as too much to overcome, at least in the short term.

Coach Lane Kiffin's polarizing history hasn't exactly helped the matter either. But the fact is the Trojans still routinely pull in more marquis recruits than any other program in the west, and few nationwide are on their level in terms of the quality of their top talent.

Kiffin is also under scrutiny for USC falling to 8-5 last year, but the Trojans were 2 field goals and a touchdown from being 11-2, and beating a BCS team (Stanford). The recruiting sanctions have hurt their depth, but reports of the Trojans' demise do appear to be more a matter of hope than fact, and somewhat exaggerated.

Good reason #1 to have faith in USC of course is third year starter junior quarterback Matt Barkley. Barkley has been through both the good times and bad, and improved on and off the field along the way, to the point where its likely that he won't be back once the Trojans become post-season eligible, having already moved on to the NFL. Given any reasonable amount of help, having an experienced, pro-quality quarterback has usually a recipe for a good season in the Pac-8/10/12.

So the question is how much help does Barkley have?

At receiver, quite a lot. Sophomore Robert Woods is being talked about as a potential All-American,and incoming freshman George Farmer and redshirt freshman Kyle Prater are also projected to be stars. USC also has experienced receivers in Brandon Carswell and Brice Butler. Tight end is also a "Great Shape" position as described by ESPN's Ted Miller. In a year where there are a lot of question marks and new faces in conference secondaries, Barkley could rival Stanford's Andrew Luck when it comes to passing numbers.

What could temper that are problems with the offensive line, where tackle Matt Kalil and guard Khaled Holmes are the typical NFL players in training, but the rest of the starters in 2010 have left. And the injury bug in spring ball combined with the beginning of the impact of sanctions on the roster to leave the Trojans very thin.

The balance from the rushing game could be compromised by the offensive line as well, not to mention off-field fiascos, such as the one that has already cost Marc Tyler his opportunity to play in the Trojans' season opener against Minnesota. 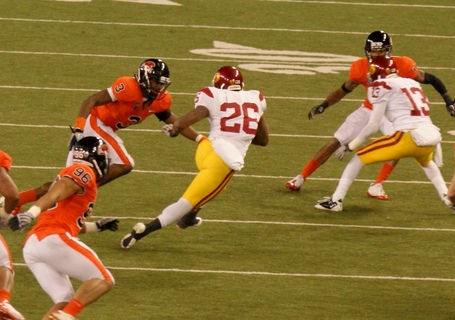 Marc Tyler (26 above), USC's starting tailback, will miss the season opener against

Minnesota, as a result of comments he made during the off-season.

There is seemingly always endless depth at USC at tailback, though, and having to turn to Dillon Baxter isn't exactly a problem for Kiffen and Barkley.

The defensive line is deep, and Miller rates USC as being in "Great Shape" at both DE and DT. Chris Galippo, 54 below, will contend for first team all-conference honors at middle linebacker, and T.J. McDonald will do the same at free safety. 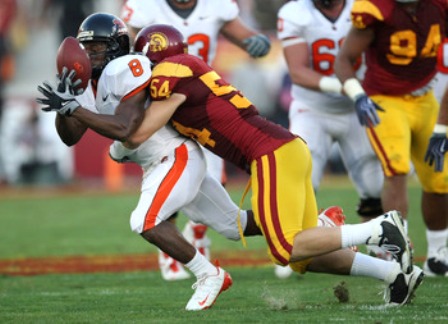 If defensive guru Monte Kiffin can get his NFL-experienced message across to at least some of the new-comers in the back 7, the Trojans could and should improve over last year.

The Schedule Is Managable

USC also has a schedule that is fairly favorable as far as finishing high in the Pac-12 South as well.

The Trojans open with three home games, and have 7 total, with 5 of their Pac-12 games in the LA Coliseum.

Non-conference games against the Gophers and Syracuse, both very winnable, will help with the attitude of the team, which is one of Kiffin's biggest concerns, given that the Pac-12 Championship game and any bowl game are both off the table. If many losses pile up, the Trojans could tank mentally, but wins will foster enthusiasm.

USC also gets 4 of their toughest tests, against Utah, Arizona, Stanford, and Washington all in the Coliseum. Stanford has won the last two meetings in Los Angeles, the last two games in the series, and three of the last four overall from the Trojans. Washington has beaten USC on dramatic last second scores two years in a row, including in the Coliseum last season.

That kind of success against USC, especially in the Coliseum, is very unusual, and also hard to sustain. At some point, the Trojans are going to put a stop to those streaks. The odds are at least one of them this season.

USC misses Washington St., a team they frequently flog, but also won't have to face Oregon St. When that matchup has happened in Reser Stadium, its the Beavers who have won the last three times out.

The Trojans do have tough visits to Arizona St., Notre Dame, and Oregon. USC is riding an 11 game winning streak against Arizona St., and while the odds are really overdue for that run to end, the run has been so long that it's clear that USC has the Sun Devils' number.

The Notre Dame game won't matter in the Pac-12 South standings, but the game comes a week before Stanford. A win over the Irish will instill confidence against Luck and the Cardinal, and a loss will leave Kiffin and crew in a mood to make amends. Either way, it increases the odds of an upset win.

The Trojans also face Cal on the road, but the game will be in the San Francisco Giants' AT&T park across the bay, where USC was a winner the last time they played their in the 2009 Emerald (Now Kraft Fight Hunger) Bowl. And the Golden Bears won't be quite as impressive of a home crowd.

Oregon will be a brutal challenge in Autzen stadium, and USC hasn't won in the Willamette Valley since 2005. But if the Trojans can handle Utah and keep their streak against Arizona St. intact, the chances of claiming the initial Pac-12 South title are pretty good.