Utah Can Make A Splash In The Pac-12 South

Share All sharing options for: Utah Can Make A Splash In The Pac-12 South

Utah has a good opportunity to make an immediate splash in their first year in the Pac-12. The Utes are making a big step up in competition from the Mt. West, at least in terms of the teams that fill out the bottom half of the two conferences' standings in most years. But Utah has won double digit games the last 3 years, and 5 of the last 8, all winning seasons, including a pair of perfect seasons, capped by BCS bowl wins over Pittsburgh and Alabama.

Coaching has had a lot to do with that, with the run beginning under Urban Meyer, and continuing the last 6 years with Kyle Whittingham at the helm. Whittingham is 57-20 since taking over for Meyer, is 12-5 against BCS schools, and 4-3 against Pac-10 teams. Whittingham has been on the Utah staff since 1994, and was Meyer's defensive coordinator.

The Utes won 10 consecutive bowls before they dropped last years' Maaco Las Vegas Bowl 26-3 to Boise St., who should probably have been in a BCS bowl. This while playing minus quarterback Jordan Wynn. So Utah has demonstrated that they can play with the best teams regardless of where they hail from. 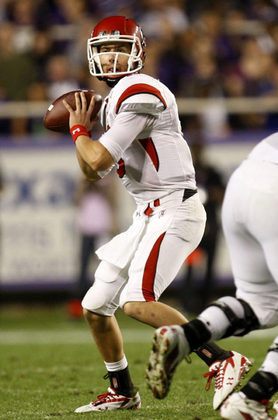 Wynn is healthy again, and has won 11 of the 15 games he has started, giving the Utes one of the prerequisites for success in the Pac-10/12, a reliable, quality quarterback. And Wynn has 3 returning starters in front of him on the line, including both tackles.

Defensively, the Utes have most of the personnel back on the line and at linebacker that ranked 11th in the country against the rush last year.

The problems for Utah increase the further you move away from the line of scrimmage, though. Their top three running backs all have moved on, leaving the run support for Wynn a "We'll see" proposition.

On defense, all the starters in the secondary are gone, and as Beaver fans are well aware, breaking in a green cover group in a conference where future NFL quarterbacks abound can be a painful process.

As we have seen all week, the schedule you play in the Pac-12 is going to be as critical to your team's success as your talent is. And Utah has caught several breaks in their first season in the Conference. The two teams the Utes will miss from the Northern Division in their first two years are two time defending Pac-10 Champion Oregon and Stanford, the two teams that went to BCS bowls last year, and are widely considered to be the top teams again, both featuring Heisman hopefuls with great supporting casts. How well, and how fast, Whittingham can reload at these positions will largely determine how well the Utes will do.

The Schedule Is Favorable

Everyone knows Utah can play with the best teams in the country, they have proven that already. But the legitimate question that remains is whether they can do it week after week, with few breaks where they get relatively weak opponents. The back to back lopsided losses the Utes suffered late last season to TCU and Notre Dame support this theory. And tough non-conference trips this season to BYU and Pittsburgh won't help.

However, one of the Utes biggest games, and one of the games that could determine the winner of the Pac-12 South, is the trip to the Los Angeles Coliseum in the second week of the season to take on USC. The Utes are making this a campaign kind of game, taking the band and everything.

And Utah opens early, against Montana St. on Thursday, Sept. 1, so the Utes will have extra time to rest and prepare for the Trojans. The wear and tear of the Pac-10 grind might become an issue later in the season, but it won't be a factor here.

Utah also gets both Washington and Arizona St. in Salt Lake City, and they have a week off to prepare for the Huskies. The Utes also get Oregon St. at home, and while California is a road game, it will be at AT&T park while the Golden Bears' Memorial Stadium is being rebuilt. This could blunt the Bears' home field advantage

Utah does have to go to Tucson, but in November, when the heat will have subsided, and after the 'Cats will have already faced a gauntlet of a schedule that includes consecutive games against Oklahoma St., Stanford, Oregon, USC, and Oregon St., and also a trip to Seattle to face the Huskies the week before. Much more than Utah, it is Arizona, who happen to have essentially no experience entering the season on their offensive line, that may be unable to withstand the grind.

The Utes also finish with two of three at home, with visits from UCLA and Colorado wrapped around a trip to the Palouse to take on Washington St. All three of these opponents are more likely than not to finish in the lower half if their divisions, so just when Utah might be wearing down is when they potentially get some of their easier games.

The breaks of the schedule gives Utah the opportunity to contend for one of the top couple of positions in the Pac-12 South. And since USC isn't eligible for the post season, it could be that the Utes do get to meet Oregon or Stanford. In the first ever Pac-12 Championship game.