Can Arizona St. Find The Consistency To Climb In The Pac-12 South?

Share All sharing options for: Can Arizona St. Find The Consistency To Climb In The Pac-12 South?

Arizona St. is a popular pick to contend for the first ever Pac-12 South Division Championship, or at least reach the inaugural Pac-12 Championship Game, which they could do with a second place finish if USC, who is ineligible for post-season play for one more year, finishes on top. Most polls have the Sun Devils in or close to being in the top 25 nationally going into the season.

Can Arizona St. find the consistency to climb that high? Will they at least get back to a bowl game for the first time since 2007?

The same question about finding consistency also applies to linebacker Vontaze Burfict. Burfict established himself as a major force to be reckoned with last season, but has sometimes struggled with getting carried away on the field. When senior cornerback Omar Bolden, widely considered to be the leader of the defense, went down in April with a torn ACL, Burfict's importance only increased.

In order to reach a bowl game, and probably save coach Dennis Erickson's job, Arizona St.'s defense needs to avoid the breakdowns that kept them home for the Holidays last year. The group gave up 14 or fewer points three times, but also allowed 42, 31, 50, and 34 points in four of their losses.

Brock Osweiler takes over as the clear number one at quarterback this year, after Steven Threet, the starter much of last year, was forced to retire after a reoccurring series of concussions. Osweiler has a stable of receivers, led by Gerell Robinson, below, whose' spring suggests he's headed for a big season. 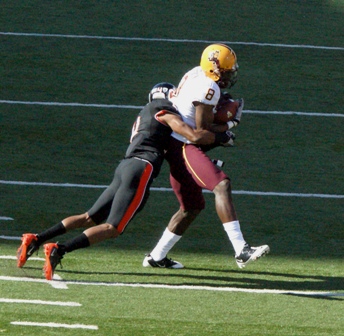 Having Mike Willie, Aaron Pflugrad, and Jamal Miles, all of whom caught at least 25 passes last year, makes the loss of T.J. Simpson to a knee injury not that concerning.

Most expect the offense to respond, and the big reason is the Sun Devils have 11 of their top 12 from the 2010 team back, including center Garth Gerhart and tackle Evan Finkenberg. Contrast this with Arizona's having to start the season with 1 total start on the offensive line to the entire team's credit.

A good offensive line tends to solve a lot of problems.

Which is something Erickson will need to do, or the heat will really increase in the always toasty Valley of the Sun. 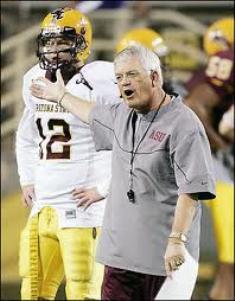 Erickson is the 12th. winningest coach in FBS amongst coaches with 10 or more years of experience (not counting his two stints as an NFL head coach), with a .660 winning percentage, and a record of 173-59-1. But after going 10-3 and going to the Holiday Bowl in 2007, his first year at Arizona St., the floor fell out from under the former Oregon St. coach, who had only had 3 losing seasons in his 20 years as a college head coach.

The last 3 seasons have produced 5-7, 4-8, and 6-6 campaigns, and because the Sun Devils were forced to play two FCS opponents in order to complete their schedule last year, that mark didn't make them bowl eligible for the third year in a row. Failing to make it to a bowl this year could end the stay in Tempe of a coach with a National Championship on his resume.

The schedule does afford a chance to get that required bowl berth, but contending for the Pac-12 South will be tough.

The preseason features visits from UC-Davis and a tough Missouri Tigers team, and a trip to Illinois. A sweep would help, but going 2-1 is almost mandatory heading into the Pac.

The Sun Devils open conference play with a pair of home games, but they are against USC and Oregon St., two teams who seem to have their number. The Trojans have beaten Arizona St. 11 straight times, and the Beavers have won 3 straight, and 4 of 5. After that, its back to back trips to Utah and Oregon. Erickson and crew could turn in 4 very good games and still most if not all of those games.

Arizona St. does get a break from the schedule, missing Pac-12 North and BCS contender Stanford, and Andrew Luck, though the Sun Devils played the Cardinal closer than most last year, falling 17-13 in Palo Alto. They also miss Washington, a team they beat 24-14 last year.

After a bye, a the Sun Devils embark on a critical stretch, starting with a visit from Colorado, followed by trips to UCLA and Washington St. Multiple wins would be a big help heading into the final home stand, which, oddly, starts with the Territorial Cup against Arizona, and finishes with a visit from California.

There's enough talent on the ASU roster to win a fair share of games this season, but there's been enough inconsistency in the past to expect some of it to repeat itself, and a couple of losses will probably drop the Sun Devils down a couple of spots in the final Pac-12 South standings.