Share All sharing options for: Reasons why Arizona is apt to struggle in the Pac-12 South

Arizona St., Utah, and USC are some good reasons, and we'll look at them in more detail in the days to come. But there are also some areas of concern more focused on the 'Cats as well.

With quarterback Nick Foles, running back Keola Antolin, and it now appears wide receiver Juron Criner, the best returning receiver in the Pac-12 whom it was briefly feared would be hampered  this season due to family and non-football issues, all apparently at full speed, optimism for at least a fourth consecutive bowl game, and contending for the first Pac-12 South Division championship extends well beyond just the Wildcat faithful.

Certainly the always entertaining coach Mike Stoops and his 'Cats probably will probably start and end the season well, opening against FCS Northern Arizona out of the Big Sky, and closing with the Sun Belt Louisiana-Lafayette Ragin Cajuns (who went 3-9 last year), both in the friendly confines of Arizona Stadium in toasty Tucson.

But getting even 4 more wins in the middle 10 games of what is a pretty brutal schedule will be a challenge.

And that was a fair prognosis before safety Adam Hall and linebacker Jake Fischer both went down with knee injuries.

The Arizona "Bear Down" desert swarm defense had already sent bookend defensive ends Ricky Elmore and Brooks Reed to the NFL, as well as relief DE D'Aundre Reed, so the loss of a couple more key players will make it difficult for the 'Cats to duplicate last year's defensive quality, good for third in the Pac-10 and #33 nationally in total defense.

This puts added onus on Foles and Antolin to produce, and on a substantial level, regularly. Which they have demonstrated they are capable of. But only if they are actually upright. Which could be a challenge. 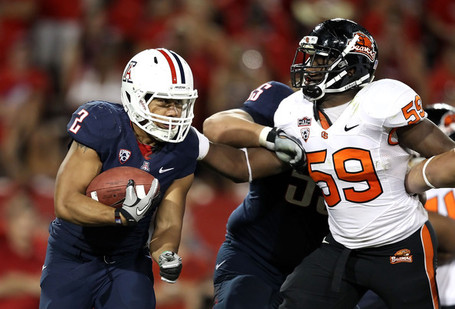 Keola Antolin will have to carry the rushing load for the 'Cats in 2011.

Arizona graduated their entire offensive line, and entering the Northern Arizona game, the entire 'Cats program has exactly ONE prior start on the offensive line.

Arizona faces Oklahoma St. in Stillwater, Stanford, Oregon, and then USC in the Coliseum. These teams provided 4 of the 5 consecutive losses the 'Cats suffered at the end of last season. Then comes a trip to Reser. That might not immediately resonate quite like the prior 4 teams, but remember, the Beaver defense knocked 3 opposing Pac-10 quarterbacks out of the game last year in games in Corvallis.

After that gauntlet, Arizona will probably need a bye, and a Thursday night game against UCLA, which will in turn give the 'Cats another longer week of preparation. A good thing looking at the stretch run they face in the Pac-12. 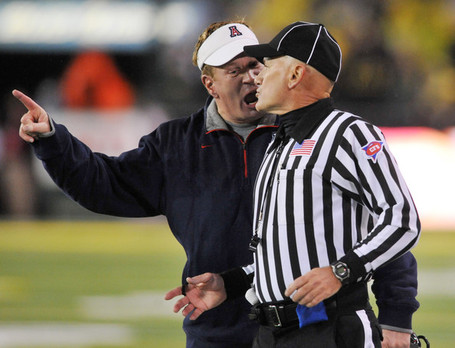 Pac-12 officials on a regular basis this fall.

With Washington St. and California, the teams many see as the contenders for the bottom two spots in the Pac-12 North being the teams the 'Cats miss in the first two years of divisional play, it means Arizona has a trip to Husky Stadium to face Washington, a visit from Utah, and then a trip in mid-November to Boulder to take on the Buffs as their next assignments. For a desert team, simulating what early winter could be like in Colorado isn't possible, so this contest could take on a whole different look than if it were in late September, or in Tucson.

And then there is the Territorial Cup, which will be in Tempe. Arizona St. was that fifth team that contributed to the collapse of Arizona last season.

Unlike in recent seasons, when the 'Cats also had Nic Grigsby along side Antolin, there's little help this time if Antolin goes down, since yet another knee injury has already eliminated Greg Nwoko from the equation. And though Foles has one of the better backups in the Pac-12 in Matt Scott, Arizona's hopes clearly ride on Foles.

Pac-10/12 quarterbacks more often than not don't go the season without going down. Of the 12 members or the Pac, no one but Stanford and Andrew Luck managed to not have one (or more) starting quarterback(s) get knocked out of a game, Arizona and Foles included. And none of them started last year with as inexperienced of a group as the 'Cats will have on the offensive line.

If you are betting, don't count on Foles being the last man standing every week. Or on the 'Cats not dropping a few games going through the gauntlet they face, and dropping into the lower half of the Pac-12 South.