Here Comes Colorado; Can They Climb The Ladder In The Pac-12 South?

Share All sharing options for: Here Comes Colorado; Can They Climb The Ladder In The Pac-12 South?

Colorado joins the new South Division of the expanded Pac-12 this year, and they are going to make a splash, one way or the other.

The Buffs have what is generally considered the toughest schedule in the FBS this year, and will play at least 13 straight weeks. With a season opening trip to Hawaii, NCAA rules allow Colorado to schedule one additional game, and so both their preseason schedule includes not only their annual in-state rivalry contest with Colorado St. in Invesco Field in Denver, but also a trip to Ohio St.

And the Buffs manage to play 10 of their new conference rivals, missing only Oregon St. Their home opener game with California won't count in the Pac-12 South standings, however, as it is a previously scheduled completion of a home and home series with the Golden Bears. The game not counting in the Pac might be a good thing, considering the Buff were beaten 52-7 last year in Berkeley.

After 5 consecutive losing seasons, the once powerful Buffs sent Dan Hawkins packing before last year's campaign was actually completed, after Colorado allowed Kansas to run off 35 unanswered points in less than 11 minutes to claim a 52-45 win, and brought back a couple of alums in new head coach Jon Embree, and former Colorado great Eric Bieniemy, the school's all-time leading rusher, as offensive coordinator.

The Buffs bounced back to win two in a row before Big 12/10ths bound Nebraska knocked them out of a bowl berth on the last installment of their made for ABC rivalry. It's also worth noting that Colorado beat Hawaii, a 10 win team, and also Georgia and Kansas St., all three bowl teams. At 5-7 against a schedule that featured 8 bowl teams, they weren't exactly terrible, though they were weak against the pass (110th out of 120 FBS teams), and this with an NFL first round pick defensive back in Jimmy Smith in the secondary. That's a disconcerting thing heading into the Pac, the conference of quarterbacks.

Colorado has a good candidate for the weapon of choice in the Pac, though, in Tyler Hansen, below (AP photo), who has 15 starts under his belt, and completed nearly 70% of his passes last season before getting hurt in the seventh game. 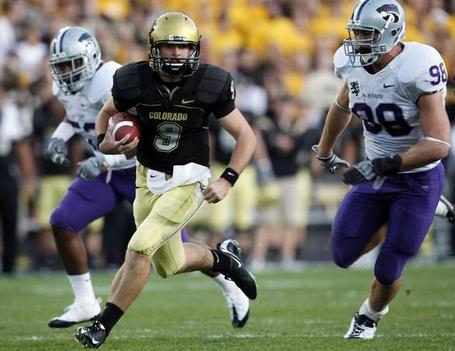 The Buffs also have a solid back in Rodney Stewart, who piled up 1,318 yards and 10 touchdowns last year.

Three starters return on the offensive line as well. A balanced offense that can move the ball in the air and on the ground is generally very helpful in the Pac, and helps shield a vulnerable defense as well.

The Buffs better be able to maintain that balance, as the middle of their schedule is brutal, with back to back trips to Stanford and Washington, followed by a visit from two time defending Pac-1o Champion Oregon, the pick to win the Pac-12 Northern Division. Right after that is a trip to Tempe, and a date with the Arizona St. Sun Devils.

Ralphie and company do get USC and Arizona both in Boulder, though, and in November. The Trojans will get a taste of night time winter at 5,440 feet elevation in the Colorado Rockies, as kickoff is set for 7 PM on November 4th.

For teams from Los Angeles and Tucson, the location for these games is no small detail, and the conditions they encounter are not something they can simulate.

While the schedule concludes with a very tough trip to Utah to renew a once active rivalry with the Utes, the week before is a trip to the Rose Bowl. The game against the Bruins could, if things go well, be instrumental in the Buffs earning a bowl berth. At worst, it could be Colorado's bowl game (they do need 7 wins, not 6, in order to earn a 14th. game).

Either way, it will be a nice reward for a team used to trips to Lincoln in late November. And a win over a Bruin team likely again suffering from the inconsistency that has plagued them in recent years could certainly decide who isn't bound for the Pac-12 South basement.

The difficult schedule makes it unlikely that a team breaking in a new coach can climb that far up the ladder, but those relegating the Buffs to the basement of the Pac-12 South due to unfamiliarity with them are likely due for a surprise.