Will Neuheisel Lead The Bruins Back? Or will UCLA hit bottom?

Share All sharing options for: Will Neuheisel Lead The Bruins Back? Or will UCLA hit bottom?

One of the questions the first season of the Pac-12 will provide the answer to seems to be whether coach Rick Neuheisel will be able to lead the Bruins back into at least the post-season, or will UCLA instead hit bottom? In order to prepare the preseason Pac-12 Media Poll picks, its necessary to crystal ball that answer.

Neuheisel knows this as well as anyone, and that makes him and his Bruins, like any cornered major predator, dangerous. And, being a UCLA alum, he understands why Bruin Nation, as well as Bruins Nation, are holding him accountable for what has been the latest in a series of disappointing runs for UCLA football.

The Bruins fired another popular alum, Karl Dorrell, for being merely a middle of the pack kind of guy, bringing in another of their own, Neuheisel, who led UCLA to victory in the 1984 Rose Bowl as a quarterback. And he had 7 winning seasons, and 7 bowl games, in 8 years as a head coach at Colorado and Washington. Two 4-8 seasons and just one at large bowl berth was far short of what was anticipated when the Golden Boy was brought home.

To make sure he either at least wins enough to keep his job, or loses it on his own, not because of others' decisions, Neuheisel essentially convinced his administration to pay former offensive coordinator Norm Chow a half million dollars to go coach at Utah. Neuheisel, long thought of as much as anything as a quarterback coach and an offensive mind (and he's certainly been thought of as a lot of things in his colorful career), will take the reins of the UCLA offense this season, and attempt to hit enough home runs to produce some more of the wins that have shown Bruin Nation that they aren't crazy in their expectations for big things. Wins like last year's 34-12 lassoing of the Longhorns in Austin.

Trouble is, there have been many more disasters, like the 59-0 loss at BYU in 2008, or last year's series, where Neuheisel's guys lost to the two Bay Area teams, Stanford and California, by a combined 70-7 score. And 4 straight losses dating to the Dorrell era to cross-town rival USC is simply intolerable to many UCLA backers.

Many in Bruins Nation won't even be happy with a .500 record, or a Kraft Hungry for a Win Bowl berth, but I suspect that will be enough to earn Neuheisel another year (assuming no unexpected USC-esq NCAA inquiry arises in the meantime). UCLA Athletic Director Dan Guerrero will probably be unwilling to pay both a deposed Neuheisel and the type of high profile coach many Bruin followers would clamor for (i.e. Nick Saban) if he has had a trip to a bowl game.

But is even that realistic?

To be sure, Neuheisel's focus, creativity, and energy, and maybe even a favorable clock or replay official (that wouldn't happen in the Larry Scott run Pac-12, would it?), combined with a considerable amount of individual talent distributed around the roster, will probably produce a surprise win or two somewhere along the schedule.

The Bruins do have a legitimate 1,000 rusher in Jonathan Franklin, and a true Pac-12 star receiving talent in Nelson Rosario. And a healthy Patrick Larimore at linebacker will help a lot on the defensive side of the ball.

But exclusive of those lightning strikes, does the schedule hold enough wins for those to put UCLA in at least the middle of the Pac-12 South pack? Or will they result in another 4-8 record, like the upset wins over Houston, Texas, and Oregon St. did last year?

The non-conference slate is critical to Neuheisel and the Bruins, because while it won't directly have anything to do with where they place in the division, they do count equally in the overall record, and for bowl eligibility.

After a trip to Houston, the Bruins host San Jose St. and Texas. 2-1 is almost the minimum that UCLA can accept heading into the conference race, which starts with trips to Oregon St. and Stanford. The Beavers haven't forgotten about the end of the game last year in the Rose Bowl, and the Cardinal haven't forgotten how much fun going to a BCS bowl was.

UCLA does miss both Oregon and Washington in the expanded Pac-12 divisional schedule rotation, both teams that took them to the woodshed in 2010, but the Bruins also have to go to Tucson, and then Salt Lake City in November, as well as visiting the Coliseum this year.

UCLA gets Arizona St. in the Rose Bowl, but the Sun Devils torched the Bruins for 55 points last year.

If the Bruins don't sweep games against Washington St. and California, by the time Colorado comes to the Rose Bowl in late November, for the game that could well determine 5th. and 6th. in the Pac-12 South, a bowl game and saving Neuheisel's job could already be effectively out of reach.

Why would that be, given the obvious focus the program, never mind the coach, will have this season?

Problems on both offense and defense, that's why. 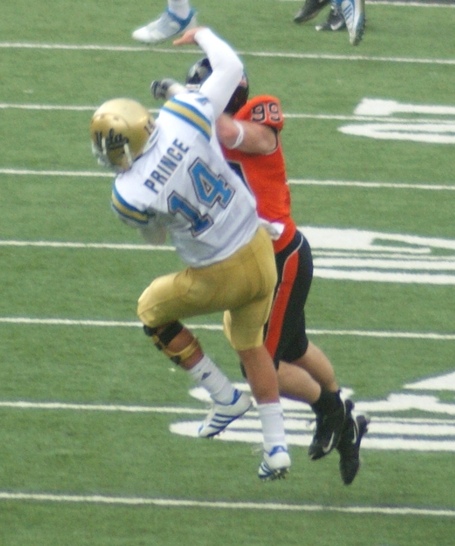 Kevin Prince has struggled all career long with injuries and inconsistent performances, due to injuries and inconsistent play by his offensive line that has allowed all too many shots like the one above. Prince missed all of spring ball this year as well, and his line struggled again this spring due to injuries, compounded by a lack of depth. Richard Brehaut hasn't fared that much better in relief of Prince.

This is going to put pressure on the UCLA defense, which is going to have to keep games from getting out of reach. Problem is, the Bruins lost their best players, linebacker Akeem Ayers and safety Rahim Moore, and they were a weak defense to begin with. Last year, UCLA ranked #53 against the pass, in large part because opponents often ran the ball so effectively against them that they wound up #108 (out of 120) in the nation against the run.

Why are they ranked so low given the athletic talent they have, and the strong performances they turned in against Houston, Texas, and Oregon St.? One factor is that very athletic talent. UCLA has played a defensive style that capitalizes on one on one play, and when the matchups are favorable, their individual talent can dominate. But defense is a team game, and when it goes wrong for the Bruins, it tends to go very wrong.

I find it hard to pick Neuheisel to finish last in a make or break season with the individual talent he has recruited to Westwood, but those major questions marks at quarterback and on defense look like the season will be lost by mid-November. Colorado is also in for a tough season, thanks to the toughest schedule in the country, but the trip to the Rose Bowl could be their bowl game.

Had the Bruins and the Buffs met earlier in the year, that could have been a difference maker for UCLA's season. But on the late date they meet, new Buffs coach Jon Embree will likely still have his team playing hungry, while Neuheisel may be faced with players having already packed it in for the season, and a fan base that has turned on him.

In 2010, the same problems at quarterback and with their defense caused the Bruins to lose their last 3 games, and 6 of their final 7, 5 by substantial margins, with only the 17-14 time management event that produced the upset of an unprepared Oregon St. breaking up what was otherwise a disastrous last couple of months. Unfortunately for Neuheisel, much history looks like it could repeat itself in the latter part of this year's campaign.