Just How High Will Oregon Go?

Share All sharing options for: Just How High Will Oregon Go?

The two-time defending Pac-10 Champion Oregon Ducks are the preseason pick to win the first ever Pac-12 Northern Division, despite what will be a difficult start to the month of November. The real question is whether another trip to the BCS National Championship is a possibility? Or will it be another Rose Bowl season?

Certainly, several other teams will have something to say about it, but the Ducks are better bets than anyone else to not only win the Pac-12 North, and advance to the first ever Pac-12 Championship Game, probably as the host.

The reasons why third year coach Chip Kelly will overcome the challenges of Stanford, Washington, Oregon St., and others, not to mention various distractions and the need to replace standouts from the 2010 team, are the ones that usually translate into a top team. A solid quarterback in the experienced Daron Thomas, and a superb rushing game behind the one-two punch of La Michael James and Kenjon Barner.

James, a Heisman Trophy contender, is a big enough challenge, but coupled with Barner, who would start for 10 teams in the conference, it gives Oregon the best tandem in the conference, possibly the country. And Barner's kick return capabilities makes the temporary absence of Cliff Harris due to his off-field antics of little concern. 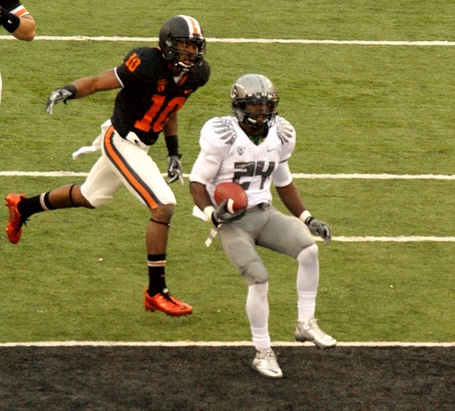 Oregon has some work to do to reload on the offensive line, at wide receiver, after the departure of Jeff Maehl, and on defense, with Brandon Bair also gone. But the large quantity of blow-out wins Oregon has been posting has allowed Kelly to continually play reserves extended minutes, making them game ready when it comes time to plug and play them into the starting lineup.

David Paulson leads a trio of quality tight ends, Lavasier Tuinei and Josh Huff give Thomas options to toss to in the Oregon spread, and tackle Mark Asper and guard Carson York return to anchor the offensive line. Oregon has plans to rotate 5 players at defensive tackle, with Terrell Turner and Dion Jordan at the ends.

If Harris can't stay on the field, the Ducks still have John Boyette and Eddie Pleasant in the secondary. Josh Kadu is on the Butkus award watch list at LB, making the Kiko Alonso affair a lot less of a factor.

And Rob Beard returns as the kicker.

The Ducks are sufficiently loaded to avoid having any area of great weakness to be easily exploited, though there continues to be no depth behind Thomas, and as history has shown, an injury there could bring things collapsing down around Kelly much quicker than anything the NCAA might do ever could.

The worst case scenarios surrounding allegations about the Ducks possible purchase of Lache Seastrunk are at this point just that, worst case scenarios. And even if the worst happens, it probably won't until well after the season is over. So there's no reason to downgrade the immediate expectations in Eugene.

If Oregon manages to defeat LSU in their opener in this year's edition of the made-for-ESPN spectacular in Cowboys Stadium that Oregon St. participated in last year, the Ducks will be an early favorite to return to the BCS National Championship game, and playing as they were last year to solidify their standing nationally. If the Tigers take the game, Oregon could still fight their way back to the title game, or at the very least be very testy the rest of the year.

Despite some difficult stretches, including a conference season opening trip to Tucson, and back to back road games at Stanford, again the biggest challengers to Oregon, and arch rival Washington, for the final game in Husky Stadium as we have known it, before the renovation, to start November, the schedule is nevertheless fairly favorable.

Oregon misses Utah, a contender for the Pac-12 South, and gets both Arizona St. and USC, two other contenders for the top spot in the south, at home in the noisy surroundings of Autzen Stadium. The Civil War is in Autzen this year too.

So if Oregon can overcome the slow surface that is Stanford, and the sure to be hostile Husky crowd, who would love nothing more than to knock off Oregon to close the door on their grand old stadium, the Ducks will be in great position to host the first ever Pac-12 Championship Game. That could even eclipse the ear-ringing Civil War for the Roses in 2009, and the Halloween night win over USC, for wildest, loudest, and biggest game in Autzen History.