Share All sharing options for: Luck A Factor In Stanford Being Picked Second In Pac-12 North

Stanford being picked to finish second in the first season of the Pac-12 is mostly a matter or Luck. And luck. And with a bit of luck, they could well content for the top spot.

We are of course talking first and foremost of course about quarterback Andrew Luck, who would have been the first pick in the NFL draft had the senior to be not put off a pro career to complete his degree, plus be a primary candidate for both the Heisman and Davey O'Brien awards. And try for another BCS Bowl appearance.

The Cardinal aren't just about Luck either, with a pair of all-Pac-10 offensive linemen in Jonathan Martin and guard David DeCastro back as well. Luck will have a good group of wide receivers and the best collection of tight end talent in the conference to throw to, and also an 1,100+ rusher in Stepfan Taylor to hand the ball to. Shayne Skov and Delano Howell lead what should be a solid defense as well.

In fact, with the showdown with Oregon in Palo Alto this year, there's a chance Stanford would have been the preseason pick to unseat the two time defending Pac-10 Champion Ducks had Jim Harbaugh not opted to move up the street to coach the San Francisco 49ers, and taken some of his assistants with him.

Stanford promoted David Shaw, a Stanford grad and Harbaugh assistant to take over, but no coach without any head coaching experience at any level is going to be the pre-season pick to win a Pac-12 division, the spectacular performance of Chip Kelly in his first two seasons at Oregon not withstanding.

But we are also talking about the luck of the schedule. In addition to getting Oregon at home, on the slow turf that is Stanford Stadium, the Cardinal have 5 of 9 conference games, including the "Big Game" against rival Cal, the game with North division up and comer Washington, and 7 of 12 contests at home, including their last 3 games.

Other than slowing down speed (spelled "O-r-e-g-o-n"), Stanford is generally the least significant home field advantage in the conference, as demonstrated below by their turnout for last year's BCS bowl bound squad. But playing in Palo Alto means not playing in the highly hostile confines of Autzen Stadium and Husky Stadium. 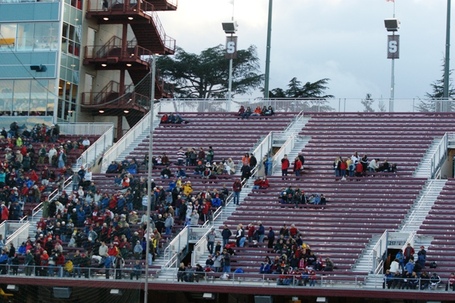 The Cardinal also get a big break in the teams they won't face, at least during the inaugural season of the Pac-12, where the larger membership means Stanford missing 2 teams from the Southern Division not located in Los Angeles each season. This fall, it is Arizona St. and Utah, two top contenders to win the Southern division that the Cardinal don't have to deal with.

And while Stanford does have to go to the LA Coliseum, USC hasn't been the challenge for the Cardinal that the Trojans normally represent, at least under Harbaugh. Stanford has not only defeated USC twice in a row, the Cardinal have won three of four from the Trojans, including their last two trips to the Coliseum. Whether Shaw can continue Harbaugh's deal remains to be seen, but Stanford's current players and staff do not see USC at home to be an insurmountable obstacle.