Tangible and Intangible Reasons Why Oregon St. Can Be Third In The Pac-12 North

Share All sharing options for: Tangible and Intangible Reasons Why Oregon St. Can Be Third In The Pac-12 North

Having discussed the reasons for Washington to appear in 4th. place in the pre-season predictions for the finish of the first season of the Pac-12 Northern Division, including the potentially decisive one being that the late November showdown between the Huskies and the Beavers will be in a rocking Reser Stadium, its now time to examine why Oregon St. can be in position to claim third with a win that day.

Just as Washington won't concede the division until actually eliminated, neither will the Beavers. Given that Stanford also visits Reser this season, and Oregon St. has played two time defending Pac-10 Champion Oregon tough in the last two Civil Wars, there's no reason that they should. The Cardinal have taken two of three recent games from the Beavers, but struggled when not playing on the slow track that is Stanford Stadium. And the Ducks' current three game winning streak in the Civil War is the longest by either team since Riley first took over on the Beavers' sideline.

But with an unsettled rushing attack behind an offensive line that has been inconsistent, lingering injury rehab issues for four of their best offensive players, and uncertainty all over the defense, realistically the Beavers, coming off their first losing season since 2005, and more loses, 7, than they have suffered in any season since coach Mike Riley's first season in his first stint with Oregon St. in 1997, and with as few returning starters as anyone in the Pac-12, being in the hunt for third place in the division is about as good as can be expected going into the season. But is even that too much to expect? Or will the Beavers in fact bounce back?

One reason Oregon St. should be back in familiar territory, fighting for a bowl berth, is that they are not one of those teams with a "We'll see" situation at quarterback. Last year, Ryan Katz was the most inexperienced starter in the Pac-10, and regardless of a multitude of other issues, the fact is that in the last 50 years or so of the PCC/Pac-8/10, experience at quarterback is usually what results in wins. This year, instead of being a target for the rest of the conference, Katz leads the Beavers on a schedule that favorably provides games against all three teams with question marks for quarterbacks.

With the advent of divisional play in the Pac-12, teams miss two opponents from the opposite division, so with only two teams in the quarterback question mark category in the northern division, it could be good fortune that Oregon St. also gets UCLA, who could still be trying to sort out Kevin Prince, Richard Brehaut, and true freshman Brett Hundley on Sept. 24, and in Reser Stadium.

With the departure of Jacquizz Rodgers after his junior season for the NFL, Oregon St. will need Katz to have a breakout season, and Katz will in turn need help from the receiving corps. That wouldn't have been a question had James Rodgers not found it slow going recovering from a major knee injury last year in Tucson, and WR Jordan Bishop not broken his ankle in the winter playing in a pickup basketball game. And if H-Back Joe Halahuni hadn't had to have shoulder surgery at the end of spring ball that will probably delay his return to the field into the season, possibly a month or more. And if Katz hadn't broken a bone in his wrist in the 2010 Civil War.

But all of those things did happen. Rodgers' return remains the media's favorite subject to have doubts about. Halahuni didn't get surgery until months after the season ended. 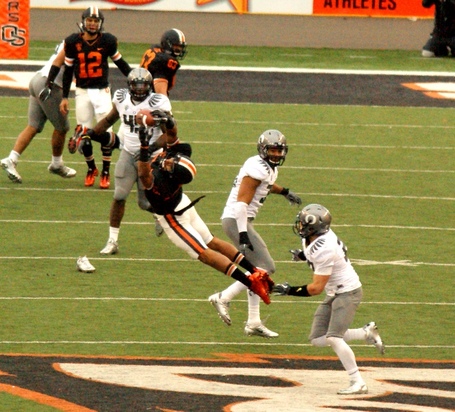 Bishop, above, capable of spectacular catches few receivers can hope to make, missed spring ball with his foot in a walking cast, and therefore the reps in the offense that might have led to more catches this season. And Katz, originally expected to be cleared sometime during spring practice, was never released to take direct snaps until into the summer.

The events were the final straws that led Riley to fire the team's head trainer. 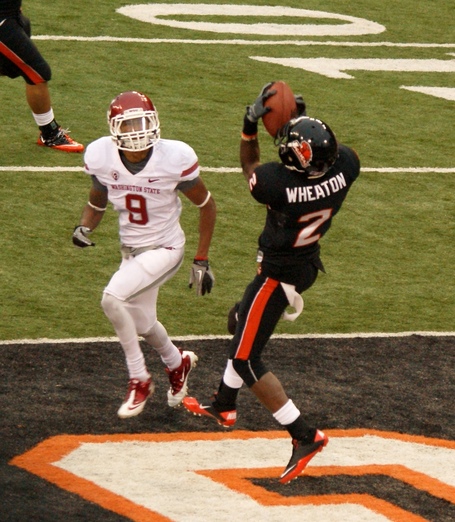 Fortunately, Marcus Wheaton, above, who was second on the team in rushing yardage, after taking over for Rodgers in running the fly sweep, as well as the teams' leading receiver, with 55 catches, stayed healthy through it all. Bishop is back on track, and while Halahuni has a lot of rehab left ahead, by the time the Pac-12 race comes down the stretch, don't bet against "The Tank" being back in action.

Beaver backers, and BTD writers, might be guilty of optimism when it comes to James Rodgers' ability to bounce back, compared to Husky Honks, Quacker Backers, and others around the conference. But those around Corvallis also have the advantage of having watched the elder Rodgers' work ethic in effect. 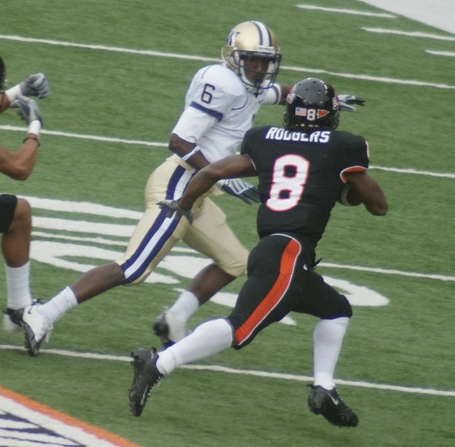 Is it really wise to bet against this guy?

There's recent precedent for an Oregon St. receiver capitalizing on an extra season as well. Sammie Stroughter became a game changer when he received one last chance, and Rodgers could do the same.

Katz has had the benefit of up close looks at the likes of Andy Dalton, Kellen Moore, Andrew Luck, Nick Foles, and Jake Locker, and that experience will be invaluable.

And speaking of recent precedent, there has been a pattern of Oregon St. quarterbacks progressing significantly in their second season, most of whom had lesser physical tools and fewer quality receivers than Katz is working with.

But as discussed with regard to why Washington, California, and Washington St. were picked to populate the bottom half of the Pac-12 North, the schedule can be as big a factor as the roster is when handicapping the competitive conference race.

While Oregon St. gets only 4 home games, they get two of their conference road games at alternate sites that will diminish their opponents' home field advantage. California will host Oregon St. at AT&T Park where the Giants play baseball while Memorial Stadium undergoes reconstruction. This will curb the effects of the Cal crowd, not known for having an affinity for crossing the bay, something they be tasked with regularly this coming season.

Oregon St. won the then Emerald (now Kraft Fight Hunger) Bowl in 2007 in the same stadium, and the Beavers own the Bears of late as well, having taken 4 straight games, the last three in dominating fashion, by margins of 13, 27, and 28 points.

And the Washington St. game will be played at Century Link Field in Seattle, home of the Seahawks. The Cougs, at least the east side ones, will have a longer, more difficult trip to make than Beaver Nation, and so an Oregon St. squad intent on atoning for last season's disaster against the Cougars will have a lot of friendly fans on hand, maybe almost as many as Washington St. will put in the stands.

Another favor the schedule provides, especially relative to Washington, is no game in Los Angeles, where the Beavers haven't beaten the Trojans since 1960. The Huskies, on the other hand, will be trying to beat USC on the Coliseum for the second season in a row.

And there is one more big intangible in the schedule. Oregon St., and Riley, will be looking to get even with not only Washington and Washington St., but also both Utah and BYU, as well as UCLA, all of whom beat the Beavers the last time they encountered them. Riley is too much a gentleman and a sportsman to ever admit to any desire to "get even."

But he is also too much of a competitor to not look to make up for those miscues, all but the one in Salt Lake City having been a surprise and an upset. And after a decline in the record 3 of the last 4 seasons, the need for a season of improvement is as urgent as has been since the beginning of RIley's first stint. Player motivation often starts with coach motivation.