Oregon St. And Washington On Another Collision Course?

Share All sharing options for: Oregon St. And Washington On Another Collision Course?

Last year, a one point, double overtime win by Washington over Oregon St. in Seattle was a major determining factor in which team went to the Holiday Bowl, and which one wound up a win short of going anywhere for the holidays.

This year it looks like another close battle is in store between the historic northwest rivals in the middle of the initial Pac-12 North race. While neither the Beavers nor the Huskies are going to concede anything to Oregon and Stanford, and a case can actually be made for an upset of one of the big two in each of the four games involving the Ducks and the Cardinal against their closest pursuers, depth and experience suggests that over the long haul, Oregon and Stanford will rise to the top in the North.

Washington has made great strides in the last two years under Steve Sarkisian and his coaching staff, one that has brought tremendous continuity to Montlake, with nary a change since the former USC assistant took over. However, simply staying in place despite continued improvement in depth could be at once disappointing to Husky fans hungry to improve on last year's Holiday Bowl upset of Nebraska, and still be a good piece of work by the Washington crew.

The reason of course is the loss of graduating senior quarterback Jake Locker, leaving Washington in the dreaded "We'll see" category of ESPN's Ted Miller's 2011 quarterback assessment. Keith Price takes over at quarterback for the Huskies, and has one career start to his credit. Should Price falter, physically or otherwise, its freshman Nick Montana who will step in.

Price showed well in the spring, and got good marks considering the circumstances despite a 37 point loss in Autzen in his sole start, and Montana obviously has the pedigree to be a PCC/Pac-8/10/12 quarterback, one of the toughest tasks in college football for generations. But an inexperienced quarterback, as Oregon St. fans found out again last year, is bound to have a disappointing outing or two somewhere along the line in the Pac. And in the deep and difficult North, that's all it takes to relegate even a good team to the middle of the pack.

Fortunately for Harry Husky, Price, and Husky fans everywhere, Washington has Chris Polk, who would be getting nationwide notice as the best back in the Pac-12 were it not for Oregon's LaMichael James, a Heisman Trophy contender himself. Polk leads a deep stable of running backs that will take some of the pressure off Price, and that gets Washington in position to compete. 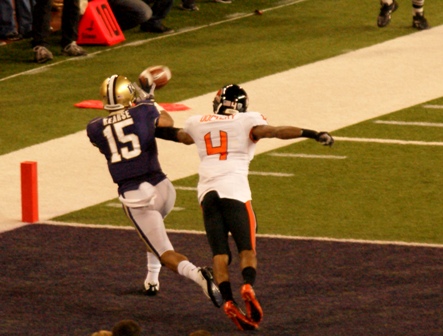 And once Price (or Montana) settles in, Washington also has a dangerous set of receivers, led by Jermaine Kearse (above), so by the latter part of the season, the Husky passing game could well be a lot better than their cumulative numbers will lead a lot of people to believe.

Defensive coordinator Nick Holt has to get continued improvement out of his charges as well in order to allow an initially run oriented offense with an inexperienced quarterback to have room to operate. This Husky team is not one built to win 52-48 shootouts. And there's good reason to believe Holt will have his guys continuing to improve. 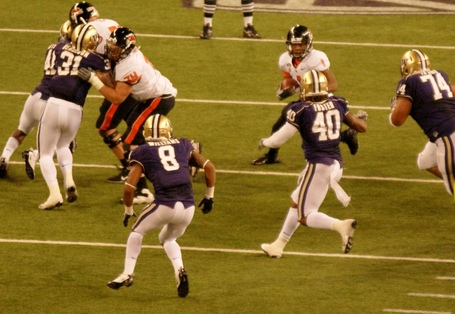 Washington will need to have their defense hem in opponents as they did above against Oregon St.'s Jacquizz Rodgers. However, the Huskies have another large set of shoes to fill, one possibly even larger than Locker's. Mason Foster (40, above) was right in the middle of the Husky defense's efforts his whole career, and he too has graduated.  Replacing your best linebacker as well as your quarterback leaves as huge of an experience and leadership gulf as the talent gap created by Foster and Locker taking their services to the NFL did.

So how will that play out as Washington navigates the Pac-12? It means an early trip to Utah, and a mid-season sojourn to Stanford, are going to be very difficult games to get wins in, and even a split will be a big accomplishment.

After that, the last two games to be played in Husky Stadium for 22 months, until after the renovation is completed, will unfold. Arizona opens the home stand, and it is a must win game for Washington. The Wildcats aren't the best matchup for the Huskies, and its worth recalling they blasted Washington 44-14 last year in Tucson, starting a three game run of blowout losses that also included a 41-0 loss in Husky Stadium to the Cardinal.

The goodbye to the grand old stadium the next week won't probably be a happy ending either, as arch rival Oregon, the two time defending conference champions that pinned a 53-16 loss on Price in his only start, comes to Montlake to start November.

With the advent of the Pac-12 divisional schedule, teams miss two opponents from the opposite division every season, and Washington does get a break here, as Arizona St., one of the contenders for the Pac-12 South, is one of the teams the Huskies don't face. A good thing, considering that the Sun Devils have downed Washington 7 times in a row, dating back a decade.

However, the other team the Huskies miss out on is UCLA, a popular choice to contend for the cellar in the Pac-12 south.

So November will be critical for the Huskies, and after the Oregon game, next up is USC. The Huskies have upset the Trojans in dramatic, last second fashion the last two years, and both wins have been cornerstones to Sarkisian's rebuilding of the program.

And what is the Huskies' reward for beating the Trojans in the Coliseum last year? Another trip to Los Angeles!

Other than former Stanford coach Jim Harbaugh's deal, not many teams beat USC twice in a row in the Coliseum, or three times in a row anywhere.

So it seems that the following week when Washington comes to Corvallis, the Huskies and Beavers could well be both battling for bowl eligibility again.

After last year's disappointment on the lake, look for the chain saws to be fired up at Reser for the Beavers' final home game of the year. And just as the Dawg Pound was a factor, so too will be the Beaver Dam. Third place, and maybe a bowl game, could come down to a late game decision, and this time it will be the Huskies who will have to execute without being able to hear each other.

After two very inhospitable games, the Apple Cup won't be the home field advantage it usually is either, as the game will be played downtown at the Seahawks' Century Link Stadium, Washington St.'s home away from home. And the Cougars will have a game of experience there already, making the Apple Cup a wide open affair.

And the last of many reasons Washington is the pick for fourth place in the initial Pac-12 North race.