Considering Why Cal Could Struggle

Share All sharing options for: Considering Why Cal Could Struggle

Conner has California pegged to finish fifth in the initial Pac-12 North Division race, and I have to agree with that assessment.

There are a couple of big factors that tend to override everything else that the Bears will have to handle, and they aren't ones easily or often overcome.

First and foremost, the Pac is a quarterback league, and that's been true since the days of the Pacific Coast Conference, never mind the Pac-8, 10, and now 12. And as ESPN's Ted Miller so eloquently noted, the Bears are one of just three teams with a "We'll See" situation at quarterback. And one of those, Washington, happens to have the second best running back in the Pac in Chris Polk.

The Bears don't have that luxury, and they do have a trip to Husky Stadium on the schedule.

California underachieved last season, finishing 5-7, and 3-6 in the Pac-10, and inconsistency at and in front of their various quarterbacks was one of the big reasons why. This season, the Bears will open with Zach Maynard, a dual threat type of quarterback who transferred from Buffalo. Maynard put up less than spectacular stats for the Bulls, and that was in the Mac, not the Pac. Two years ago.

Behind Maynard are the unproven pair of Brock Mansion and Allan Bridgford, neither of whom could beat out the transfer, despite having experience in California Coach Jeff Tedford's system. And considering that durability of quarterbacks is often a problem in the Pac, and that Tedford has had a somewhat revolving door approach with his qbs in recent years, its a good bet Mansion will take some snaps with the game (hopefully) still contested this season as well. Bridgford too.

That's not a good sign for the Bears' season, as teams that have experienced quarterbacks usually have some success in the Pac, and those that don't typically struggle. Beaver fans only have to reflect back to last year, when every other team on the Oregon St. schedule started the season with a quarterback with more experience than anyone on the OSU depth chart. And a .500 season proved to be beyond their reach.

It's not all gloom and doom for the Bears though, as Tedford has indicated he will take a more active role in coaching the Cal QBs this season. Tedford is the best coach in modern Golden Bear history, but one of his biggest criticisms has been that he has stepped back from the level of direct involvement he once had earlier in his career  with the position, such as when now Green Bay Packer Aaron Rodgers was under his tutelage. Tedford's re-dedication to quarterback development should help.

But the fact remains that the relatively shaky situation behind center usually results in an unfortunate loss at some point. And with the Bear's schedule, that's doubly likely. 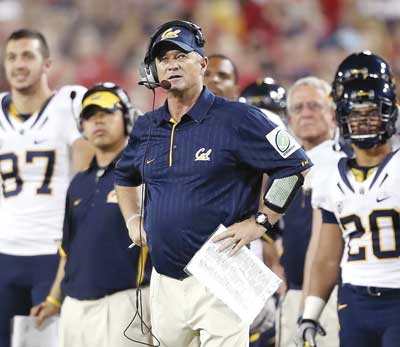 California coach Jeff Tedford could be in for frustration in 2011, despite

his taking an increased roll in coaching his quarterbacks.

The Bears were brutal on the road last season, winning only once, and usually losing by large margins. Most of the time out of town, the Bears were beat by the time the halftime break rolled around. And this year, Cal is effectively homeless.

Reconstruction of Memorial Stadium sends the Bears across the Bay Bridge a lot, with the Fresno St. game at Candlestick Park, and the rest of their "home" games at the Giants' AT&T park. The Stanford game is across the bay as well, and while we are talking about trips that are only a few miles, it might as well be halfway across the conference as far as the impact on their fan support goes.

And as we discussed with reference to Washington St., in the Pac, it matters when and where you play, and now, with two missed teams in the conference schedule rotation, who you play, and don't play.

And Cal gets no break here. The Bears actually only miss one conference opponent, Arizona, but their game against Colorado is the conclusion of a home and home non-conference series with the erstwhile Big XII member Buffs. California clobbered Colorado 52-7 last year, and the Bears will be favored to beat the Buffs again when they meet in Boulder, due in large part to the fact that Colorado is breaking in a new coaching staff. But while Cal can count that win for bowl eligibility, they can't count it in the conference standings.

California, which lost three straight at home to end the season last year, open the Pac-12 schedule with back to back road games against Pac-12 North foes Washington and Oregon, sending the bad news Bears to the two toughest stadiums in the conference to play in.

The Bears then return to their home away from home, and will have to face USC and Utah. The Trojans have taken the Bears down 7 consecutive times, and the last time Cal faced Utah, it resulted in a double digit loss in the 2009 Poinsettia Bowl.

California does get Washington St. in the Bay Area instead of the Palouse, which is why they are picked to finish above the Cougars, and Oregon St., but the Beavers have had the Bears' number like no one except USC, having won 4 straight, the last 3 by increasingly large double digit margins.

The Bears have also had a habit of struggling down the stretch the last couple of years, and the schedule this year makes that a likely outcome again. After the "Big Game" in Palo Alto, California finishes up with a trip to Tempe. Depending on what happened there the week before in the Territorial Cup, two very probable scenarios are that the Sun Devils could be playing for a berth in the inaugural Pac-12 Championship Game, or scrambling to get bowl eligible, and possibly save coach Dennis Erickson's job. In either case, it will be a highly motivated Sun Devil team that lines up against the Bears.

And remember, the Sun Devils, who came up a win short of going to a bowl last year, suffered a 50-17 rout in Berkeley. Getting a win to close out the season is going to be tough at best for the Bears.