Breaking Down Why Washington St. Will Break Down

Share All sharing options for: Breaking Down Why Washington St. Will Break Down

Early results in the BTD poll for who will finish in last place in the first ever Pac-12 Northern Division show a strong sense that Washington St. will be the unfortunate ones. Is that really reasonable though? After all, a handful of voters have two time defending Pac-10 Champion Oregon in last place, this despite the Ducks having a returning Heisman Trophy contender. So the general public might be somewhat suspect in this analysis.

Taking a closer look uncovers some valid reasons for Cougar fans to be concerned, though.

Almost everyone at some level hopes Washington St. coach Paul Wulff, a Cougar alum and a nice guy, finds some success; just not against them. Astute observers also recognize that the Cougs have a legitimate threat at quarterback in Jeff Tuel. And Tuel has a legitimate target in Jared Karstetter. So the prospect of Washington St. making some headway this season has pretty widespread support.

Yet the road to more than a couple of victories is going to be a rocky one, especially since as Conner notes, the Cougs only have a couple of seniors on defense, the group that is going to have to look like they did in Corvallis last year a lot if Washington St. is to take many more steps down that road, and take a couple more wins. Because while the Cougars will go as far as Tuel can carry them, he can't be counted on to turn in 35+ point games every week.

Especially on the very rocky road the Cougars face this season.

Success in the cut-throat Pac-10 has often depended heavily on when and where you play your biggest games. And now, with the advent of the Pac-12 divisional alignment, where each team will miss a pair of teams from the other division each season, success will now, as has been the case in most other conferences, depend also on who you play.

There is one bit of good news for Washington St. in the schedule, in that the Cougars miss USC. The Trojans dominate Washington St. down through history, and are a contender to win the Pac-12 South, so no one in Pullman will miss this matchup.

But while the game the Cougars won't play will help, the games they will play comprise a brutal schedule.

And that one game in Pullman probably won't be a respite, as it is against Stanford. After trips to San Diego St., and after their bye week, the Cougars travel to Colorado and UCLA before the Cardinal, and probable pending NFL top pick Andrew Luck, come to town.

Immediately after that, the Cougars have a "home" game at Century Link Field in Seattle against Oregon St. The Beavers will be looking to atone for last year's embarrassing loss to the Cougars, and the double overtime loss in their last trip to Seattle, and with it being a shorter and easier trip for Oregon St. than it will be for Wazzu fans, at least east side ones, Oregon St. may put almost as many fans in the stands as Washington St. So much for home field advantage on that one. 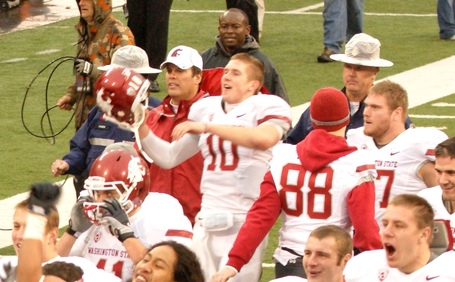 Washington St. will have to be true road warriors in order to succeed

against the schedule they will face in 2011.

Next, the Cougars travel to Autzen Stadium to face Oregon, then travel yet again, this time to San Francisco. Washington St.'s game against California could be to decide who escapes the Pac-12 North cellar, and while the Bears will be playing the season across the bay, AT&T Park, home of the San Francisco Giants, it will still be a very pro-Cal atmosphere.

The season ends on the road as well, with a second trip to Seattle. The Apple Cup will also be at Century Link, and not Husky Stadium, as the rebuild gets underway, but its still smack in the middle of Washington's home city. And there is a great chance the Huskies will be playing for a bowl berth, or an upgraded one.

Washington St. Athletic Director Bill Moos may not want Wulff to fail, but he sure didn't put together a schedule that will make any other outcome easy to come by.