Osich Out; Maybe It's A Good Thing?

Share All sharing options for: Osich Out; Maybe It's A Good Thing?

Oregon St.'s usual #2 starter Josh Osich is now officially out for the weekend in Nashville, where the Beavers will face Vanderbilt in the NCAA Baseball Super Regionals starting Friday night.

Coach Pat Casey confirmed that Osich, bothered by both a stiff back and tendinitis in his left shoulder, won't be available after practice today.

"It’s extremely disappointing that you’ve got your No. 2 starter, who I think at times as been as good as anybody, out" Casey said. "I feel bad for Josh. It’s a bad break for him, a bad break for us."

Given that Osich hasn't won since his no-hit shutout of UCLA, and especially that he only went one inning plus in his last outing against Georgia, maybe it's a good thing knowing that Osich won't be able to pitch, as it will eliminate one element of uncertainty (and there has been plenty of uncertainty when Osich has thrown of late) going into the weekend.

And it won't be the first time some one else has had to come through in the absence of others for the Beavers.

Carter Bell notes that if anything, it puts more pressure on the Commodores in their role as favorites.

"It’s perfect. There’s no expectations so we can just come out relaxed," Bell explained. "The pressure is all on Vanderbilt. They’re in their yard, and they’re expected to win … but the Beavers aren’t going to just roll over this weekend."

Casey also moved closer to confirming that Sam Gaviglio (12-2, 1.87 ERA) will go Friday night, not Saturday, which, if nothing else, will give Casey 24 hours to figure out who to throw second, never mind in a possible Sunday series deciding game. 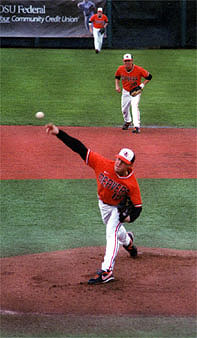 Based on his win in the Corvallis Regional against Arkansas-Little Rock, James Nygren, above (photo by RVM), (8-3, 3.47 ERA) seems like a good bet for Saturday's start, but all plans will depend on how close Gaviglio can come to turning in another complete game. In the humid heat of the south (temperatures during the time frame of Friday and Saturday's games on Thurday progressed down from the low 80s into the high 70s, with humidity in the 70+% range), it will be more difficult to get extended inning efforts out of any of the Oregon St. pitchers than it was in cool and comfortable Corvallis.

Gaviglio even acknowledged that "the heat will probably take a little more energy out of me."

Bell noted Oregon St. has played well in warm weather on the road this season, though the humidity was much lower in Tucson, and the weather more tolerable in Los Angeles. And the opposition wasn't quite as good either.

Casey says Vanderbilt might be the best team in the country.

"Vandy is the best statistical club in the country," Casey noted. "I think if you look at them, they should win the national championship with what they have. They are just  loaded. There is nobody in the country that we’ve seen on tape, or that we’ve seen play in person, that is more talented than Vanderbilt."

Some said as much about Arizona St. before they paid a visit to Corvallis, though.

Bell concluded the post practice interview by noting "We’ve been going all season just thinking about who’s on the field, not who’s off of it."