When And Where Should Riley Run Risks In 2011?

Share All sharing options for: When And Where Should Riley Run Risks In 2011?

In 2011, some risks are already on the books, with yet another trip to a potential BCS bowl team in the preseason on the schedule. Wisconsin will at least be making a return visit to Corvallis as a part of the deal, and the Badgers were booked before their BCS bowl chances were enhanced by Ohio St.'s recent attempts at imploding.

But it probably means a good chance that there are 3 BCS bowl opponents on the schedule, two on the road. This in a year where a Beaver team widely anticipated to finish around fourth in the Pac-12 North will need to win 7 of their other 9 games in order to even entertain thoughts of the New Mexico or Las Vegas Bowls.

The good news is there is a good chance of a season opening win against Sacramento St. And there is also no trip to the house of horrors and losses that is the LA Coliseum, a place Oregon St. hasn't won at since 1960, thanks to the Pac-12 schedule rotation. Something Riley was actually initially displeased about.

The Beavers also no longer have a first year quarterback. This is a big factor, as there is not just a precedent, but a pattern, of Oregon St. quarterbacks making significant progress in their second season as a starter. And Ryan Katz has a better tool set to work with than most of his recent predecessors who all won some significant games under similar circumstances. 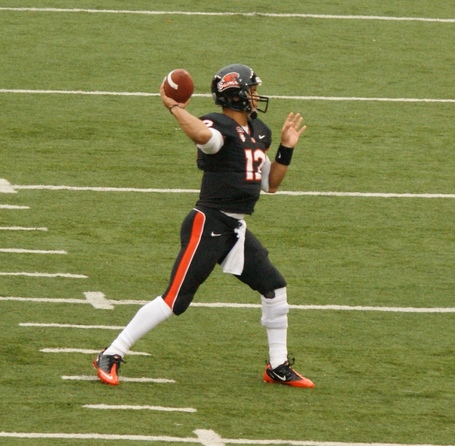 Toss in the best set of receivers to toss the ball to the Beavers have ever fielded and Oregon St. could be in a position to take some chances where the margin of error might not be so massive.

But even that is an unknown, given the uncertain knee injury recovery progress of WR/KR James Rodgers, the prospect of TE Joe Halahuni not being back on the field before October at the earliest after shoulder surgery, and questions about how quick Jordan Bishop will be back to full speed after an ankle injury.

Which suggests that risk taking should be deferred until far enough into the season to be able to actually assess what the margin for success, and error, actually is.

That said, the risk has already been taken at Camp Randall. So if there is a chance at an upset of the Badgers late in the morning, a reasonable risk would be well worth taking. A win when an L was already preprinted on most pocket schedules would make another chance later in the season much more affordable.

Especially after another of Oregon St.'s poorly prepared for performances last year, the UCLA game is a must win this year, in an early opener to the Pac-12 season, and coming off a bye to put lessons learned in Madison in place. If risk taking becomes necessary against the Bruins, then it could be a serious sign of more trouble to come.

Tempe has been another terrible destination for Oregon St. until a win two years ago broke a long losing streak in the dessert. This time down there, the Sun Devils will be the favorite to win not only the game, but a berth in the Pac-12 Championship game. And it would be tough to see the law of averages not catching up with Riley, who has defeated Dennis Erickson three years in a row.

So this too is a time when a bold move might make sense, in the sense that there may be little to lose anyway, yet an actual chance to be successful.

A two game home stand against Arizona, who won in somewhat shocking manner the last time they came to Corvallis, and BYU follows. Being a league game, against the team that Oregon St. saw Rodgers go down for the season against last year, the Wildcat game is a true wildcard in the risk/reward game.

A win would be huge in the drive for a bowl bid, being a Pac-12 game, and a feel-good win for Beaver nation, and certain players, who have plenty of unpleasant memories against Mike Stoops and company. A loss might be a morale buster, and much more so than some other games, something Riley should consider when that late fourth quarter key decision comes up.

The call will have to be a game time decision, based on the circumstances at the time.

BYU offers as much of an upside for being bold, with possibly less consequence for failure, in that it isn't a conference game. But while conference finish affects the order of selection for Pac-12 bowls, all wins and losses count equally in becoming bowl eligible, and in relative attractiveness for marketing purposes in terms of w-l record.

Put taking a big risk here dependent on having succeeded in an earlier "risk" game.

The trip to Seattle this year is to take on the Cougars, not the Huskies, and it has to be a win, or Riley will have a lot of hard questions to answer. Trouble is, the same thing can be said for Washington St. coach Paul Wulff, who is squarely on the hot seat in Pullman, and may pull out all the stops in this one, especially if it appears this could be the chance to get out of the Pac-12 North cellar at the Beavers' expense.

Expect the trip to Century Link (formerly Qwest field) to start the second half of the season to be pivotal in every sense of the word. And a game Riley would be better served to have the Beavers sufficiently prepared for that taking a big risk doesn't become necessary.

The trip to Utah is another chance to make up for a past missed opportunity. The last time the Beavers were in Salt Lake City, in 2008, a late touchdown on a play where the defense got caught mis-matched cost Oregon St. an excellent chance to spoil what turned out to be an un-beaten BCS bowl winning season for the Utes.

It was a bitter disappointment coming only a week after the emergence of Jacquizz Rodgers as one of the nation's premier backs, and the stunning upset of USC. It wasn't, however, that much due to risk taking, and as it turned out, Utah was the better of the two opponents.

This time around, it's the first league game against the Utes, who could well displace Arizona St. as the favorite to earn the Pac-12 South's berth in the Conference Championship game, given USC is ineligible, and the Sun Devils will have already paid a visit to Rice-Eccles. How that turned out will be a big factor in the risk/reward decision process for both teams, based on how their respective seasons are going come the end of October.

Oregon St. might desperately need a win, with potentially only two more win opportunities left on the schedule if Stanford and Oregon are in fact performing up to expectations. Making going for the win, like happened at Washington in 2010, seem attractive to Riley, whereas staying alive as long as possible is the better percentage play. How freshman kicker Trevor Romaine has progressed by then could be a career changing factor for a lot of folks. (NO pressure kid.)

November is when seasons are made or broken, and in 2011 it starts with a visit from Stanford. The Cardinal will be coming off games against Washington and USC, and looking ahead to a visit from Oregon. It is the classic definition of a trap road game, being Homecoming for Oregon St.

Will first year coach David Shaw have seamlessly kept the Andrew Luck led Cardinal looking like the squad that steamrolled Oregon St. 38-0 in one of their most complete losses in Riley's career (below)? Or will it be the day Luck has as much trouble in Corvallis as he struggled through in the Beavers' 38-28 win in 2009? 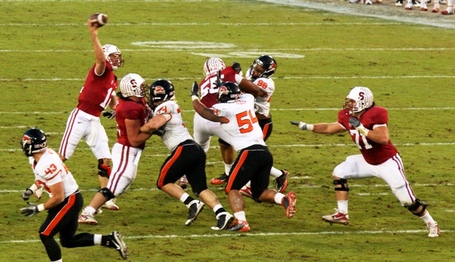 Either way, it's unlikely this game is one that a big risk late by Riley will be a game determiner. If anything, the onus will more likely be on Shaw to make a sound decision.

A trip to another opponent's home away from home, and the Beavers' last trip out of state of the regular season is up next. AT&T park, that wonderful baseball stadium that could well be Oregon St.'s post season destination, for the Kraft Go Hungry (or something like that) Bowl, will see the Beavers attempt to continue their recent domination of the Golden Bears. 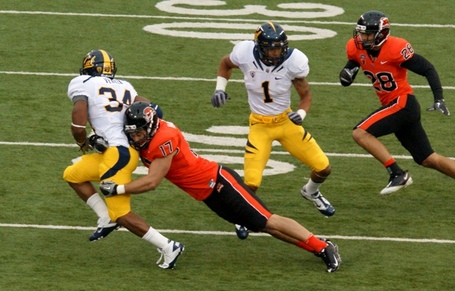 Oregon St. has looked dominant in recent outings against California.

California has lost 4 in a row against Oregon St., the last 3 by double digits, and the fourth an upset of the pending top ranked team in the country, complete with the famous Jeff Tedford clipboard throwing incident. They are some of the games that have shown Beaver Nation what their team is capable of, making the disappointing conclusions to the last two seasons especially frustrating.

Can Oregon St. possibly make it 5 in a row? Given the Bears might still have serious quarterback problems, and Katz and his receiving corps could be completely in a groove by then, it's certainly a possibility, and one that might see some of the Bears not make it back across the bridge afterwards, opting to jump instead.

Would the prospect prompt Riley into another high risk attempt at a knockout punch? Beaver fans better be prepared for it, one way or the other.

Washington comes to town for Dad's day, and Senior Day, and neither of those went any better last year than the Beavers' visit to the Huskies that night that ended in double overtime did. And it could again very possibly be a bowl elimination game for both teams.

If that happens, look for both Riley and Husky coach Steve Sarkisian, and their defensive coordinators Mark Banker and Nick Holt, to roll the dice a lot. Serious heat will ensue to whoever loses this one; will it result in bold moves, or reckless ones? It could literally be a million dollar question.

The last regular season chance for risk taking will come in Autzen Stadium, where Oregon could well be tuning up for an already assured berth as the host the following week of the Pac-12 title game, especially if they are successful in their trek to Stanford Stadium earlier in the month. A place they didn't conquer despite being favored in Chip Kelly's first year.

Or, it could be a game the Ducks have to have to get to that first ever conference title game.

Oregon St. might be playing for bowl eligibility, or bowl seeding.

All are situations similar to scenarios the Beavers have faced in recent Civil Wars. One thing that's been consistent however in the last 3 years, including Kelly's second as a coordinator, is that he has had Riley's number in terms of a better scheme, and as a result, a better outcome.

If Riley can get within a shot of an upset, bet the farm on his trying for it. Just don't bet on the gamble succeeding. Kelly isn't winning by being lucky, or surviving opponent's risk taking behavior; he's winning by avoiding situations that are left to luck, or opponent's luck.

If the Beavers find themselves in a bowl game, the heat will be off of Riley. And if even a single bold gamble that worked is what got Oregon St. there, hero status will be restored. Making it the perfect opportunity to take another bold risk.

If Beaver Nation watches a second consecutive bowl season, the next bold move might have to come from Athletic Director Bob De Carolis instead.