Should Coach Riley Take Some Risks? Or Has He Already Taken Enough?

Share All sharing options for: Should Coach Riley Take Some Risks? Or Has He Already Taken Enough?

Some were taken off the field, in deciding who to play on the field, like trading an almost sure win over Eastern Washington for the arduous task of taking on TCU.

Some were well off the field, like releasing long time linebacker coach Greg Newhouse this past off-season, and putting defensive coordinator Mark Banker in charge of the linebacking group. We'll find out this fall how that pans out.

By his own admission, Riley likes to play the big games, and he enjoys shocking the world when he does so.

Which comes at quite the contrast from the day to day, and possession to possession, Riley, who has eschewed the flavor of the week offenses for the most part, sticking mostly to a conservative pro-style offense.

Recently, the formula hasn't been working, as the Beavers have slipped backwards in terms of wins and losses in 3 of 4 seasons since that gamble in El Paso netted not only a 39-38 win over Missouri, after Yvenson Bernard's pleas to not take the game to overtime, but the best year in Riley's coaching career, a 10-4 season that featured wins over both eventual Pac-10 and Rose Bowl champion USC, and also arch-rival Oregon.

Interestingly, both of those wins were 2 point victories, involving some risk/reward themselves. The Beavers beat the Trojans after Jeff Van Orsow batted down USC QB John David Booty's pass on a two point conversion attempt, though there wasn't really any risk taken on Pete Carroll's part, as kicking the extra point would have had the same result as the failed two point conversion, specifically needing to recover an on-side kick with 7 seconds left to have a chance.

The win over the Ducks was preserved by blocking a field goal, but the height of risk there was the specific rush alignment used, as neither team did anything that qualified as a low chance of success vs. high reward if it worked.

But coupled with a 3 point win in Hawaii over a Rainbow team that finished with 11 wins, the 4 close wins created a confidence within Riley and the program that the "bold" formula was the way to go. And remember, that best ever for Riley season came after a road trip to Boise in the second week of the season, where the Broncos, who would eventually go undefeated, and win a BCS bowl, roared to a 42-14 rout of the Beavers. So the pattern of playing nearly impossible to win games against some of the toughest teams in the country, mostly on the road, in the early going even fit the formula of how to have a successful season.

Both 2007 and 2008 were similar, in that they again featured blowout road losses in the second game of the season to teams headed for double digit win seasons, and yet were only 4 loss campaigns, ending with a bowl victory that capped winning 7 of 8 down the stretch each season.

2008 even had two road game losses to eventual BCS bowl teams, which might have contributed to the thinking that the TCU/Boise St. duo in 2010 might not be the season derailer that it turned out to be.

2009 was only a touch worse, and two losses to BCS bowl teams were again a factor in a season that only slipped to 8-5 when Riley didn't get his team ready for their bowl game for the first time, and BYU (who happen to be headed for Corvallis this October) embarrassed the Beavers in the season salvaging fall-back plan that is the Las Vegas Bowl.

Yet the criticism wasn't that Riley was taking too many risks, other than continually over-scheduling. Rather, it was that his game plans, both offensively and defensively, weren't bold enough, that they were getting too conservative, and too predictable. If coach would just open things up a little, surely the "bold" formula would start to work again, right?

Or maybe there can be too much of a good thing.

Oregon St. entered 2010 with a ranked team, but an inexperienced quarterback, after having their top three QBs all leave. So Riley immediately agrees to a fourth game against a BCS quality team, three on the road.

Yes, Boise St. didn't actually go to a BCS bowl, due to not one but two missed chip shot field goals, against another team in Nevada that was a controversial deflection from being in a BCS bowl themselves. There's no doubt the Broncos should have been in the Sugar Bowl instead of Arkansas, if quality of the team was the primary criteria. And Boise St. had already demonstrated themselves to be a better team than Virginia Tech, and was a cut above UConn too.

The Beavers would have only 2 games of leeway to work with unless they could upset a top 5 team.

With half the chance for that already gone, and the best weapon to do it with in WR/KR James Rodgers also gone, what would become a Holiday Bowl berth deciding decision for both teams arose late on a Saturday night on Montlake.

Having rallied from an unprepared start that produced an early three touchdown deficit, the Beavers found themselves a point behind in the second overtime against the Huskies. And Riley decided to gamble again. With that still [relatively] inexperienced quarterback.

Leaving Justin Kahut on the sideline, Oregon St. opted for the much lower percentage of success two point conversion attempt. Going directly into the teeth of the Dawg Pound, just feet from the end line on the east end of Husky Stadium.

Oregon St. would have had to go for two starting with the third overtime anyway, but would have been operating on the opposite end, with the Oregon St. fan section not only encouraging them, but providing a disruption for Washington when it was their turn. 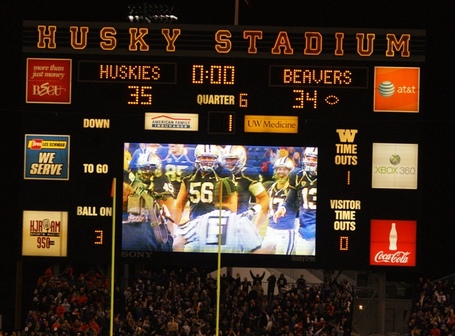 The play went awry, the air raid siren sounded, and when the Beavers came out unprepared again against Washington St., in a must win game (how often has anyone had a "must win" game against the Cougars in recent years, much less lost it?), it meant Oregon St. would be home for the holidays for the first time since '05. Suddenly, another trip to the Las Vegas Bowl, for yet another shot at BYU, was an un-attainable fall back plan for the season's end.

Clearly, the law of averages, and the glut of chances taken, had caught up with Riley, who had overlooked the difference between taking a bold gamble when he had a) the tools to make it work, and b) a margin for error to still have a successful season, and last year, when neither were the case.

It wasn't trading a probable win against Eastern Washington for a trip to Dallas to start Ryan Katz's career that ruined the year. Nor was it a reckless call against Washington. It was doing both when you knew Boise St., Stanford, and Oregon were all on the schedule, and it wasn't the right time to do either.

Risk taking is something best done not only in moderation, but at the right time, with consideration of the surrounding circumstances. Not a decision made in isolation.

Next, we will look ahead at the 2011 season, and analyze where the best opportunities, and worst ones, for Riley to take a bold risk may lay. Because if Oregon St. fans have learned anything, its that Riley will gamble again.