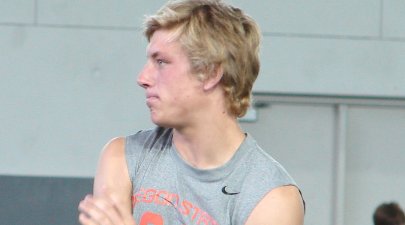 The Premier Performance Camp that concluded over the weekend at Oregon St. has produced another commit for the 2012 season. Brent Vanderveen, a 6'5", 203 lb. QB from Arroyo Grande High School in Arroyo Grande, CA, rated the 9th. best QB prospect nationally by Rivals.com, has verbally committed to the Beavers following his time at the camp.

Vanderveen threw for 1,402 yards, and 11 TDs against 5 interceptions last year in his junior season, and also rushed for 578 yards and 8 TDs

Vanderveen also had an offer from Arkansas after visiting the Razorbacks, as well as offers from Oklahoma St. and Arkansas St.

Rivals shows Vanderveen as a 3 star prospect, while Scout.com has him at 2 stars.