Oregon State and Oregon meet at 2:00 PM west coast time today to continue the three game series between the Beavers and Ducks. After today's game, the two teams will meet again at 1:00 PM tomorrow for the series finale.

The Beavers are currently on a three game losing streak after back-to-back losses against USC and a loss to rival Oregon last night. The Beavers fell by a score of 8-3 on Saturday and 4-3 on Sunday, and last night it was a 4-1 victory for Oregon. The Ducks would jump out to a 2-0 lead against the Beavers and never look back on a chilly night at PK Park in Eugene.

The Beavers came into this week ranked 7th in the Perfect Game USA Top 25.

The Ducks come into the game with a record of 31-26, 9-16 in the Pac-10. The Ducks are currently on a two game winning streak after defeating Portland on Tuesday and the Beavers last night.

After last weekend's series loss against Washington State, there is no way for the Ducks to make the NCAA Tournament. Of course, though, that doesn't mean Oregon wouldn't love to spoil Oregon State's party and keep them out of contention for a national seed.

Aaron Jones and KC Serna led Oregon at the plate in last night's 4-1 victory by picking up 2 RBI's each. These will be the final games of Oregon's 2011 season. 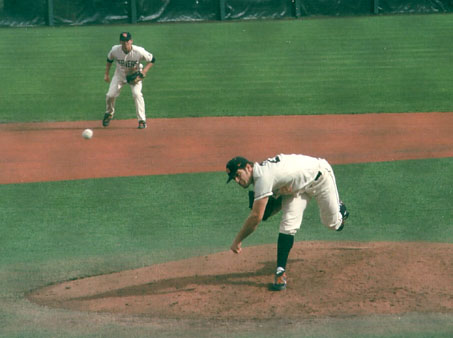 Osich, above, will look to shut down Oregon at the plate and lead the Beavers to a much needed victory in game two of this huge Pac-10 series. (Photo by RVM)

For tomorrow's game, Oregon State's starter is listed as TBA, but Oregon will send out Alex Keudell (6-3, 3.20).