Oregon State and Oregon meet at 7:00 PM west coast time tonight to begin the three game series between the Beavers and Ducks. After tonight's game, the two teams will meet again at 2:00 PM tomorrow.

The Beavers are currently on a two game losing streak after back-to-back losses against USC. On Saturday, the Beavers gave up eight runs in the first inning and would eventually lose the game 8-3. On Sunday, the Trojans spoiled Oregon State's Senior Day by defeating Oregon State 4-3. It was Oregon State's first series loss of the season.

The Beavers dropped to #7 in the Perfect Game Top 25 after the pair of losses.

The Ducks come into the game with a record of 30-26, 8-16 in the Pac-10. The Ducks are currently on a one game winning streak after defeating Portland on Tuesday.

After last weekend's series loss against Washington State, there is no way for the Ducks to make the NCAA Tournament. Of course, though, that doesn't mean Oregon wouldn't love to spoil Oregon State's party and keep them out of contention for a national seed.

On Tuesday in Portland, Oregon, the Ducks jumped on Portland early and often in their 7-2 victory. These will be the final games of Oregon's 2011 season. 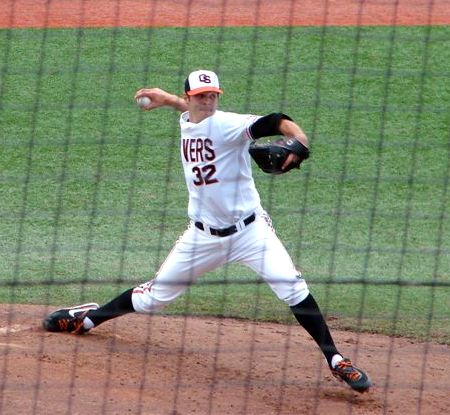 Gaviglio, above, needs 4 strikeouts to become the 10th. Beaver pitcher in history to strike out 100 batters in a season.

For tomorrow's game, both starters are listed as TBA, though Josh Osich (6-3, 3.44) is probable for the second game of the series for the Beavers.