Beavers Win Game One Easily, Give Away Game Two in Seattle

Share All sharing options for: Beavers Win Game One Easily, Give Away Game Two in Seattle

I don't think there has been another day in history when Beaver fans have felt this awful about winning a series. Oregon State (37-12, 16-5) clinched the series against the host Washington Huskies (14-33, 5-16) with a 9-3 victory in Game One on Saturday afternoon, but the Beavers gave away a 6-0 lead in the second game and eventually lost 7-6.

The good news is, that no matter what happens today in Los Angeles, the Beavers will remain in 1st Place going into next weekend's series against the USC Trojans.

The Beavers hit four home runs en route to their 9-3 victory, the most in one game for Oregon State since a 2004 game against Portland.

The Beavers got the party started with a two out-RBI double by Kavin Keyes, and Andrew Susac brought him home with the first Oregon State home run of the day. Up 3-0, Ryan Dunn blasted a hanging fastball to left field, and just like that, the Beavers led 4-0.

The Huskies got one of the runs back in the bottom half of the fourth inning on an RBI double play groundout, but the Beavers gladly took the two outs, because Washington had loaded the bases with nobody out before that.

Washington wouldn't go away though, getting right back in it in the next inning. One again, the Dawgs loaded the bases with no outs, and once again, Oregon State turned a double play. This time, no Huskies would score on the double play-ball, but B.K. Santy would change that when he stepped up to the plate. Santy ripped a 2-RBI Double into right-center field, and just like that, the Beaver lead was trimmed to one.

But just as quick as the Huskies came back, the Beavers would build their lead right back up. After intentionally walking Jared Norris to put runners on 1st and 2nd, Jake Rodriguez blasted a ball to left field for a three-run homer.

The final runs of the game came in the seventh inning, when Kavin Keyes hit the Beavers last home run of the game to right-center field. The two-run shot gave Oregon State a 9-3 lead, and the score remained that for the rest of the game.

Sam Gaviglio (10-1) got the win for the Beavers, while Jeff Brigham (3-1) took the loss for the Huskies.

Game Two recap after the break

Once again, the Beavers got off to a strong start in this one. Danny Hayes started the scoring with a two-run Homer in the Top of the 1st, and it looked like the Beavers would cruise to a sweep from there.

The Beavers added to their lead with a run in the second frame and three more in the third. Brian Stamps got a groundout RBI in the second to give the Beavers a 3-0 advantage, and Andrew Susac got the scoring started in the third with a 2-RBI Triple. Susac would then come home on a Carter Bell single, and the Beavers led it 6-0.

The Huskies would begin to wittle away the deficit in the sixth inning on a Joe Meggs RBI Double. Meggs would come around to score on a Troy Scott Single, and the lead was then only 6-2.

The Huskies would tie the game in the seventh inning with four runs, beginning with a Ryan Wiggins home run to make the score 6-3. Chase Anslement then got aboard with a Double, and Anslement scored on a Reggie Jones RBI Double. One batter later, Will Sparks would score Jones and Ty Afenir, who had been hit by a pitch, on a 2-RBI Single, and just like that, the game was tied.

The game would remained tied until the bottom of the ninth. Sparks led off the inning with a dobule, and Joe Meggs got aboard on a Bunt Single. The Beavers then chose to load the bases by intentionally walking Jacob Lamb, and Pat Casey chose to bring an extra infielder into the game to have a better shot of getting a Double Play at the plate.

The move ended up pointless as Tony Bryant walked in the game-winning run anyway, giving Washington the 7-6 comeback win. 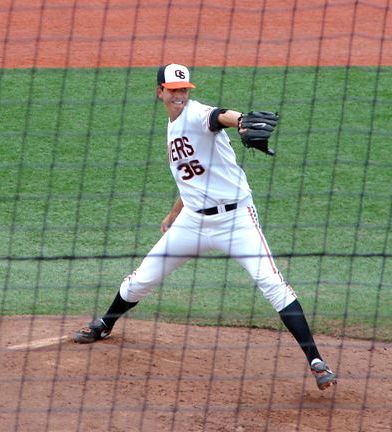 Oregon State reliever Tony Bryant walked in the game-winning run in Game 2 of the Doubleheader.

(Photo by So. Oregon Beaver Fan)