Beavers Take Care of Business on the Bluff

Share All sharing options for: Beavers Take Care of Business on the Bluff 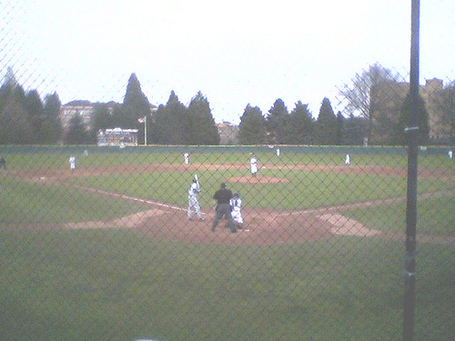 What I Saw At Joe Etzel Field

Coming into Tuesday, I dreamed of a game between two in-state rivals that went 20 innings and had a packed house at Joe Etzel Field on the edge of their seats for every pitch. Instead, Portland starter Brent Miller hit the first batter he faced and walked the next three, and by the time the Top of the 1st was over, Oregon State had a 4-0 lead. That meant that the game was all but over, but hey, Oregon State was ahead, so I can't complain.

After going ahead 4-0 in the first, Parker Berberet left no doubt about the outcome in the second frame. On a 3-2 count with two Beavers on the bases, Berberet jumped on a pitch and lifted it to left field. At first glance, it didn't look like the ball would get over the fence, but sure enough it did to give Oregon State a 7-0 lead.

For the next three innings, the scoring quieted down, but the Beavers got rolling once again in the sixth. Danny Hayes started the scoring with a 2 RBI Double, and Jared Norris capped the inning with an RBI Single to give Oregon State a 10-0 lead. The Pilots scored their only run in the bottom half of the seventh, much to the delight of the small gathering of Portland fans.

After a 1 Out Kramer Scott double for the Pilots, Scott moved to 3rd on a Sacrifice Groundout. Scott then crossed the plate on a Sam Westendorf single to left field to give Portland thier first, and only, run of the game.

More notes after the break

Overall, this was a solid win for the Beavers. It's important to win these types of games, especially against teams like Portland. The Pilots aren't great, but they certainly aren't bad either. They already have wins over Oregon and Hawaii (Twice) to their credit.