I Wish We Had Three More Weeks!

Share All sharing options for: I Wish We Had Three More Weeks!

Oregon St. coach Mike Riley liked some of what he saw Saturday, but repeated his position from earlier in the week, noting he would like to have three more weeks of spring football.

Hard to argue with the coach on that one.

The spring "game" (practice), 2011 edition, lacked game flow, as Riley opted to run a given scenario several times over before moving on, using the first string offense against the first string for a series of 10 snaps all from a given spot on the field before alternating to the second string against the second string for 10 more snaps, though an occasional kicking game play would be interjected.

The format was partially in response to the absence of several key players, mostly on offense, as QB Ryan Katz (not taking snaps with a still recovering broken wrist), WR/KR James Rodgers (not yet running as he recovers from knee surgery), WR Jordan Bishop (left ankle is still in a boot), and TE Joe Halahuni (shoulder injury), all were spectators.

The resulting uncertain mix of plays and players, along with a lot of shuffling on defense, leaves the team struggling to find consistency, and some more time, especially with some offensive players back in action, would be helpful.

Several things still stood out though, some positive, some not so much.

Katz has been running 7 on 7 passing drills during spring practice, has looked good without a pass rush to contend with. But Riley, who originally was hoping for a couple of weeks of more extensive work for Katz, is being cautious with Katz's non throwing wrist, holding him not only out of contact, but also from taking the jarring of direct snaps. 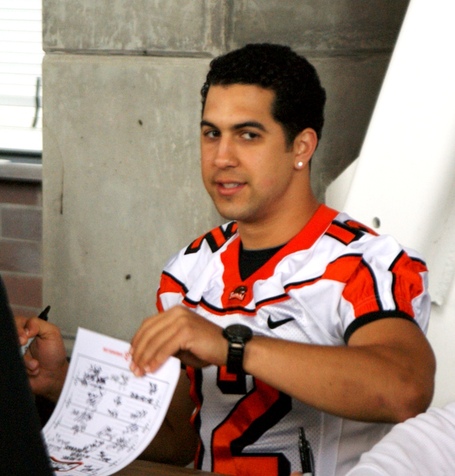 The only action Ryan Katz saw was signing autographs at fan fest.

In the meantime, Cody Vaz has clearly claimed the #2 spot on the depth char, and threw well Saturday. Good thing, because Sean Mannion isn't ready for Pac-10 second teams, much less starters. 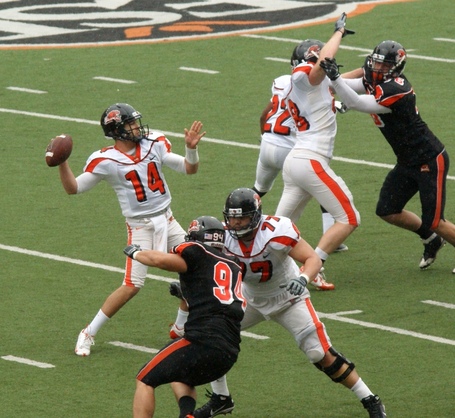 Cody Vaz (14) showed good pocket presence, and completed a majority of his passes.

As Riley noted, Mannion made a few good throws midway through the scrimmage, but overall, struggled with his accuracy, repeatedly missing open receivers.

The receiving corp was regarded as the strength of the squad, but that's assuming its healthy. Marcus Wheaton is currently the only healthy starter though, and while Wheaton is almost uncoverable, the rest of the wide-out group still hasn't found consistency. That does raise the concern about what will happen when another WR of similar abilities turns up with an opposing team, say Arizona's Juron Criner. 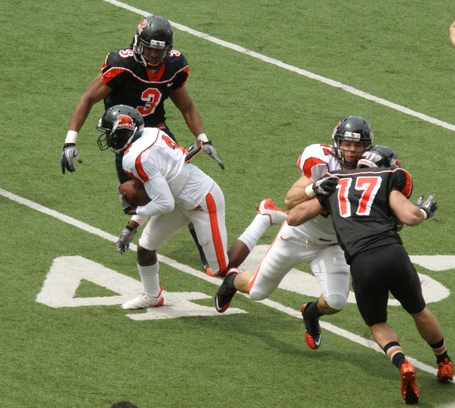 Marcus Wheaton (2) only unveiled the fly sweep a couple of times, but was effective. 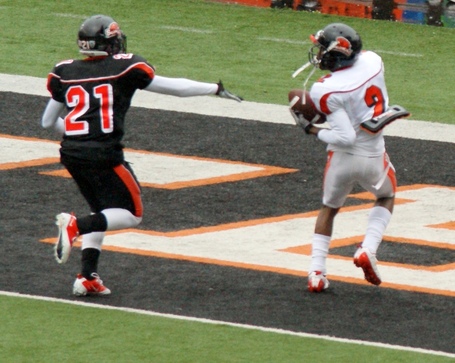 Halahuni's potential absence, which we may learn more about after another consultation with doctors next week, would be a blow, but one piece of good news from Saturday is that if he is lost for part or all of the season, TE won't be a lost position. Connor Hamlett had a huge day, and looks like he will be a big problem for opposing defenses. 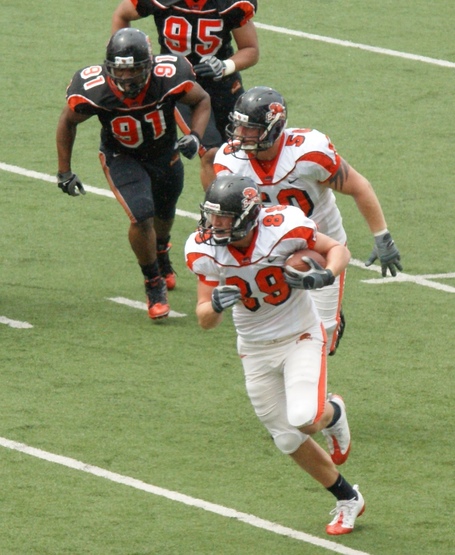 Ryan McCants is clearly the #1 running back at this point, but in an attack that doesn't look like it will produce many big plays this season. McCants looked better than at any time in his Oregon St. career, but is still a one-direction runner. He did drag multiple players at a time at the end of several runs, and the Beavers should be good in third and short situations, if they can manage to get into them. 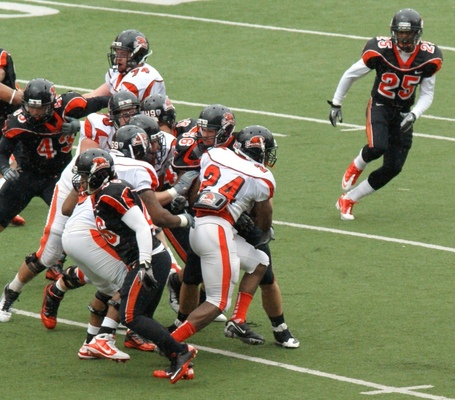 Ryan McCants (24) will give the Beavers a power rushing game, but not a breakaway threat.

Jovan Stevenson has not recovered his initial burst, after being injured in last year's spring game, and then missing last season with another injury. Interestingly, Stevenson does look like a good option for swing passes out of the backfield (below, working against CB Brandon Hardin). He's effective in space, but couldn't seem to get there running out of the backfield. 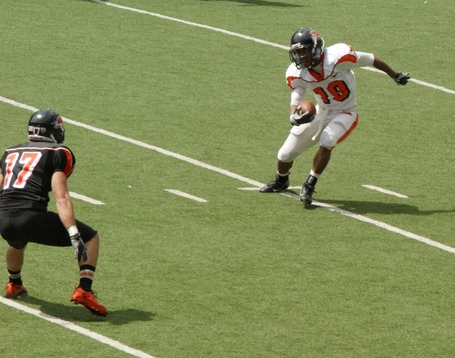 All observations about the Oregon St. running game are of course contingent on what Jordan Jenkins, another player injured this spring, does when he comes back in the fall, but it's reasonable to assume that at best, it will take some time for Jenkins to get back up to speed, and more importantly, the Beavers to establish consistency in their rushing game.

Marable, below, did have the most spectacular runs of the day, and ended the practice with the longest rushing play of the day, which went for a 65 yard touchdown. But he was also contained at times by those same third and fourth string defenders who will be redshirting, running the scout team, and not going on road trips. Marable looked to me like he could benefit from another redshirt season, but he's already had one. 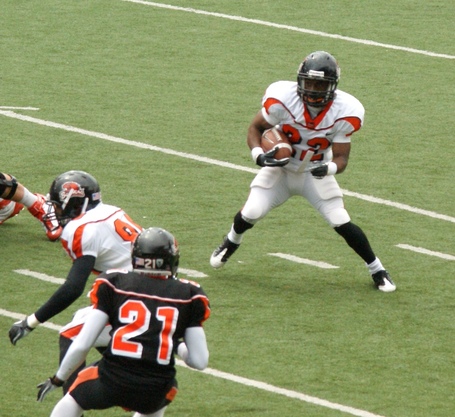 The offensive line, another area of concern, after several players were shuttled to new positions, remains another of Riley's works in process. Colin Kelly started with the first string, not Michael Phillip, and had a strong day, especially in pass protection. Overall, the lines didn't generate a lot out of running plays, though.

Switching focus to the defense, its clear that the Beavers have succeeded in upgrading their overall team speed. LB Michael Doctor and DT Dominic Glover were very active, and set the tone for the front 15. I say 15 because its clear that Defensive Coordinator Mark Banker and Defensive Line Coach Joe Seumalo plan to use a rotation of a lot of players on both the defensive line and at linebacker. 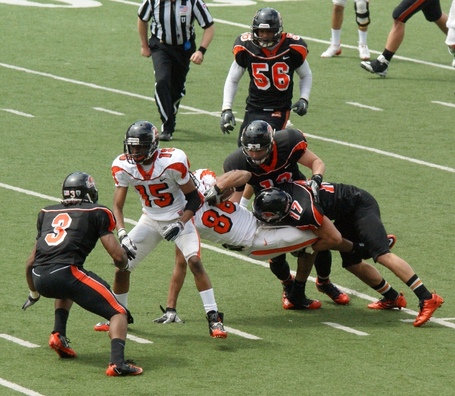 Feti Unga may have claimed a starting spot with his play at middle linebacker today. Unga had an interception for a touchdown, below, and also the light-up play of the game hitting Wheaton on a crossing route. 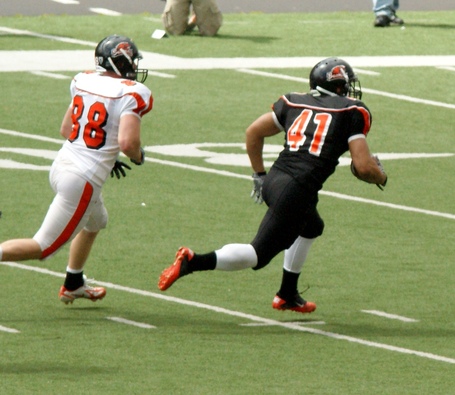 Rusty Fernando saw action primarily with the second unit, and against the second offense, but has edge speed in the pass rush beyond anything Oregon St. has had in a while. How he will hold up against the run, or whether he will be able to be used in non-obvious pass rush situations is a still a concern, as he wasn't able to collapse or escape offensive tackles at times.

Cameron Collins looks like he will be a force at LB as well. Collins looked bigger than the 245 lbs. he's listed at, yet still has the speed associated with a secondary player.

Though Oregon St.'s offense wasn't able to get a strong running game push going against the swarming Beaver defense, there does remain a concern that a really big offensive line could just bulldoze this group.

The combination of the offense not looking like a group that can mount a sustained running game, and an undersized defense, could signal trouble if an opponent can control possession, as UCLA did, last season.

The secondary looks set, with Brandon Hardin and Jordan Poyer at the corners, and Lance Mitchell and Anthony Watkins at safety. It's a group that will punish receivers. Watkins, as the newcomer in the group, as far as being a regular, was still chasing at times, but is solid in run support, and more physical than most safeties.

The kick return group is one of the best in the Pac-10, even if James Rodgers' recovery doesn't proceed to the point where Riley wants to use him there. Wheaton and Poyer both turned in good plays, and Marable was paired with Wheaton with the first team return unit, suggesting that may be where he is able to utilize his speed.

Riley would like to see freshman Trevon Romaine take over the job for the graduated Justin Kahut, but redshirt freshman Max Johnson could press him. Romaine does not have touchback range on his kickoffs, though he does have some ability to directionally kick. Coverage will be critical.

Both Romaine and Johnson missed a couple of field goals in the 30-40 yard range, though Romaine made one from 42 yards, and Johnson from 38.

Punter Johnny Hekkar didn't produce his usual one bad kick for the day, and had good distance on a couple. There is apparently no effective backup for Hekkar, though.

Oregon St. may not win many games on special teams this year, though, and a 16-13 type game is probably best avoided. 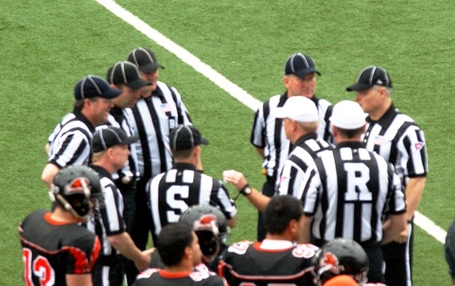 Pac-12 Conference Commissioner Larry Scott had taken a number of steps to address the reoccurring problem that has been Pac-10 officiating. Did we see another Saturday? Notice there are 9 officials, including 2 white hats. The group still managed to see holding on the Beaver offense (multiple times), as well as defensive offsides, but there was nary a pass interference call. 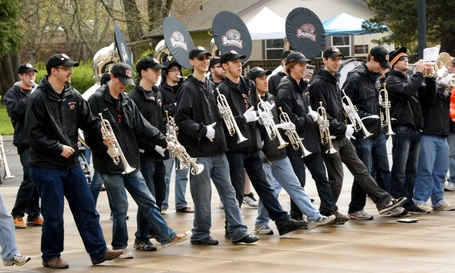 The band (above) and cheerleaders (below) were happy to have football again though. 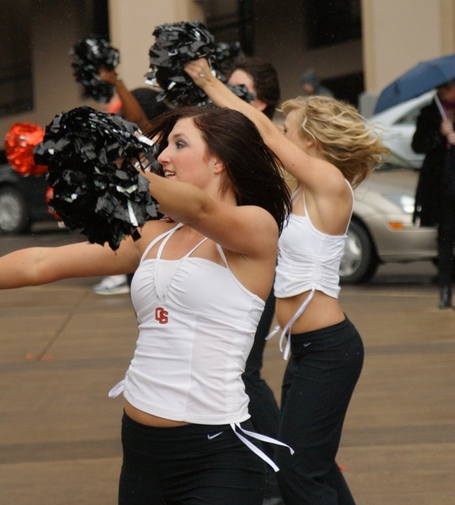 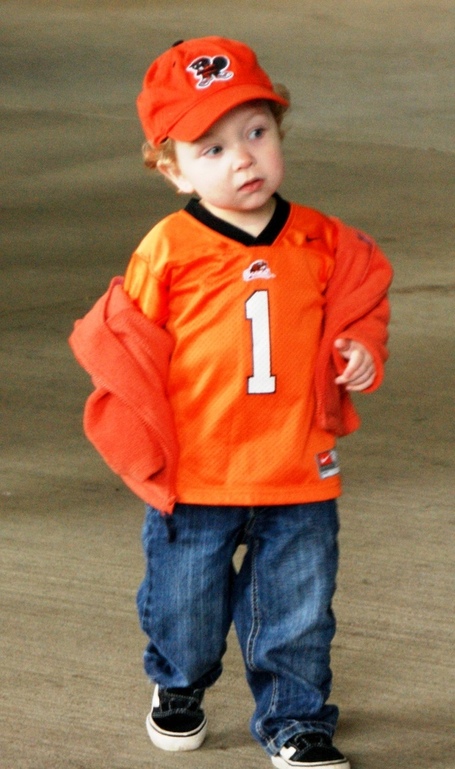 "Where is that Rodgers guy?"

A good size crowd turned out, move than 5,500, including some future Beavers, like the one above, getting his first taste of Oregon St. football. Impressive, given that they paid $5 apiece on a day that included a fair amount of rain early, and didn't get the best show possible, or a complete radio broadcast.

Oregon St. might want to consider the opportunity, especially when contrasted with ESPN and full radio coverage the program down the road had for their Saturday activity, which drew an even larger crowd. Or a crowd nearly twice the size in Seattle. The appetite for football is exceeding any historic level. An enhanced product offering would be well received.