Share All sharing options for: Gabe Miller and Jacquizz Rodgers Get Calls

The third day of the 2011 NFL draft, and the fourth through seventh rounds, saw several more Pac-10 players, including a couple of Beaver favorites, get their names called by the NFL.

Gabe Miller, a 6'3", 260 lb. product of former Beaver great Steve Coury's Lake Oswego program that has become a pipeline of talent to Oregon St., was a surprise to be the second Beaver taken after Stephen Paea, when Kansas City took him with the ninth pick of the fifth round, #140 overall, largely because of his having suffered not one, but two Achilles injuries. But the former Oregon high school player of the year will return to the position, LB, for the Chiefs, that he earned that honor at, because of his perseverance.

Miller, who started at Oregon St. as a TE, moved to the defensive end as he battled back from injuries, and recovered to be the fastest Beaver lineman in the 10 yard sprint. Labeled a reach by draft analysts, Kansas City sees Miller's varied experience and ability to persevere as worth taking a gamble on.

Those qualities are ones familiar to Oregon St. fans, who have seen Miller, also a multiple time all-Pac-10 academic selection, exemplify what it is to be a Beaver.

Five picks later, Atlanta took RB Jacquizz Rodgers, with the 14th pick of the fifth round, and #145 overall. Atlanta traded their fifth and seventh round picks to St. Louis in order to move up in the fifth round, specifically to be able to get Rodgers.

‘Quizz has a great chance to succeed with the Falcons, who are one of the better teams in the NFL, as he won't be expected to carry the offense.

Rather, he will be another tool in support of Matt Ryan, on a team that was positioned to be a regular playoff contender, and has drafted to add offensive, starting with trading up to get WR Julio Jones. 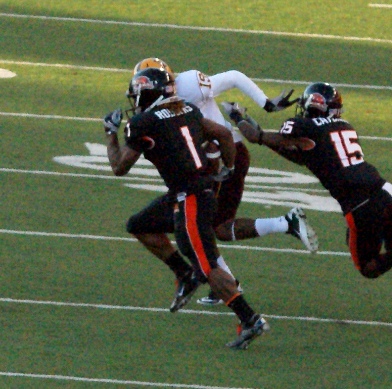 above at Arizona St.'s expense.

USC TE Jordan Cameron was the first Pac-10 player taken in the 4th round, going on the 5th pick, #102 overall, to Cleveland.

Oregon ILB Casey Matthews was selected by Philadelphia with the 19th pick of the 4th round, #116 overall.

Stanford FB/LB Owen Marecic went to Cleveland as well, with the 27th pick in the 4th round, #124 overall. Marecic, an Oregon native, is projected to concentrate on FB and possibly special teams as a pro.

Portland St. TE Julius Thomas was a notable selection by Denver, with the 32nd pick of the 4th round, coming from a northwest FCS program.

Stanford CB Richard Sherman went to Seattle with the 23rd pick of the 5th round, #154 overall.

Another Cardinal, WR Ryan Whalen, went to Cincinnati on the second pick of the 6th round, # 167 overall.

Another WR, USC's Ronald Johnson, went to San Francisco in the 17th pick of the 6th round, #182 overall, while fellow Trojan, RB Allen Bradford, was selected by Tampa Bay in the 6th round, with the 22nd pick, #187 overall.

California ILB Mike Mohamed went to Denver with the 24th pick of the 6th round, #189 overall.

Arizona DE Ricky Elmore went to Green Bay with the 32nd. pick of the 6th round, #197 overall.

Several additional compensatory picks rounded out the 6th round, and Washington St. C Zachary Williams went to Carolina on the 38th pick of the round, #203 overall.

Boise St. got a third player drafted when Washington took CB Brandyn Thompson with the 10th pick of the 7th round, #213 overall, and Arizona DE De'Aundre Reed was selected by Minnesota with the 7th round's 12th pick, #215 overall.

At the end of the seventh round, a number of additional compensatory picks were made, and three USC Trojans were selected on three consecutive picks.

FB Stanley Havili was selected by Philadelphia #240 overall, WR David Ausberry by Oakland with the #241 pick overall, and OLB Malcolm Smith went to Seattle with the #242 overall pick.