After an emotionally charged comeback win Thursday night with a lineup littered with changes from the "perfect" series opening group, and one of the most spectacular comebacks in recent Beaver history Friday night, punctuated by slumping Danny Hayes's dramatic single that drove in Jared Norris, to claim a 7-6 walk-off win, Washington St., and the game of baseball, finally caught up with Oregon St. Saturday.

James Wise, who is only 4-4 for the season after the win, came up with one of his best games of the season for the television cameras (which actually captured some of his performance; more on that later) Saturday, sparking a 2-0 Washington St. upset win over third ranked (and maybe climbing; more later on that too) Oregon St. And inside of 24 hours Beaver nation went from "What an incredible game!" and "I almost cried after the win tonight!" to "We are disappointed, as we should be; there's no excuse for us not being able to get on the board." and "This team might not have it."

Such is baseball, where a starting pitcher who has it working can make records and season statistics totally meaningless, at least for an afternoon. It's true from Little League to the Major Leagues, and every stop in between, because unlike most other sports, starting pitchers don't play every day, and are capable of completely changing the character of a game by hitting the corner with a few pitches.

"He threw a hell of a game," left fielder Ryan Barnes said. "He was getting to us. None of the balls squared up landed."

While Oregon St.'s offensive sputters Saturday against the Cougars were frustrating, "It's baseball," Barnes added. "You never win every single game. We wish we played better, but we are going to keep on rolling, and get ready for the next game."

Probably just the right attitude, as the Beavers get ready for a trip to Portland on Tuesday, before next weekend's series at UCLA (21-14, 10-5).

Maybe sunny, warm, baseball weather was too much for Oregon St. to handle at Goss. It was, after all, something they haven't had any experience with this year.

Or maybe the cameras were a distracting novelty. It was just the second appearance on "real" television (internet streaming on a laptop is NOT the same thing) for the Beavers this season, and the other game, a 7-6 win over Arizona St. wasn't exactly their most dominating outing of the year either.

Side note, the need for a) a Pac-12 network and b) contract language that requires competent production and distribution was never more obvious than this weekend. A half dozen or so games were available on the Big Ten Network, while local blackouts and confusing over the air alternate channel distribution plagued the only Pac-10 offering. (I have to assume the chaos over carriage in the valley had something to do with the recording of the game on Root Sports in my zip code starting in the middle of the second inning. At least no runs were missed!)

And somehow, what has become a Pac-10 tradition of not over-riding the endless stream of commercials that don't end before the first pitch, or some times as many as three pitches, of an inning, needs to end. It doesn't matter if you are watching Root or listening to Mike Parker's call, you will get a catch-up call of the beginning of most half innings, courtesy of the NCAA's time between innings rules. Which is something the television and radio guys were well aware of before the season started, but have persistently failed to adjust to.

But enough (for now) on production values; Pac-10 Commissioner Larry Scott and his staff of media experts understand the importance of exposure, so lets hope the new media deals focus on not only dollars and inventory, but quality as well.

Getting back to baseball, for some perspective, it's worth noting the Oregon St. (29-8, 10-2) still has a half game lead in the Pac-10, with three games in hand. And a larger lead over all of their immediate pursuers besides Arizona St., who used their second weekend sweep in a row, this week over California, to stay within a half game of the Beavers, who they have to pass, not just catch, due to that sweep just two weekends ago.

In fact, four of the top five in the Pac-10 lost Saturday. So Beaver fans suddenly thinking of jumping off a bridge might land on a Bear, a Bruin, who just lost 2 of 3 to Stanford, or a Wildcat. (Remember those guys, who handed Oregon St. an 18-0 loss, but are still 5 ½ games plus the tie-breaker back?)

Even top ranked Virginia took a loss Saturday, as did second ranked South Carolina. So Oregon St. possibly let a move toward the top of the polls slip through their fingers, as well as what would have been a third consecutive Pac-10 series sweep.

But it was the first series win over Washington St. since 2006, as the Cougars have consistently had the Beavers figured out of late. Something that coach Pat Casey and most Oregon St. fans probably would have signed off on before the season started had a guarantee of that been available. 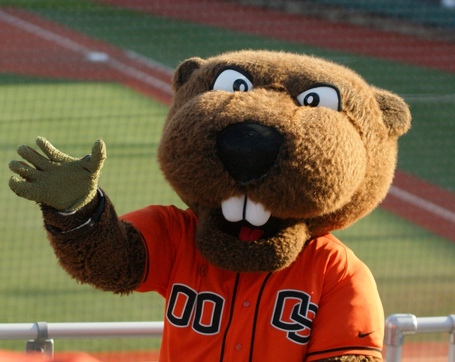 So while Easter Sunday has brought cloudy, rainy "Beaver" weather to match the mood of OSU fans, it still a better day to be a Beaver than any other Pac-10 mascot, the Ducks' 7-3 win over Arizona (giving them a series win as well) not withstanding.